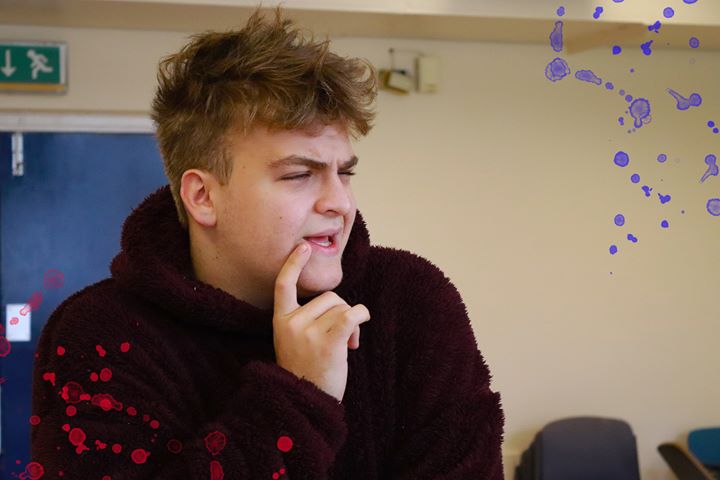 Rain is really quite beautiful when viewed from a distance. Theatre, too, is often talked about in terms of aesthetic beauty. Of course, what people sometimes forget is that up close both of these things can be cold, brutal and unpleasant. Fortunately, we live in a rainy country and so are often reminded of the former. Also, quite fortunately, we live in a nation ripe with skilled performers and directors and I had the great joy of being reminded of this second point when I saw Crazy Gary’s Mobile Disco, performed by the exceptionally talented Pound of Flesh theatre company. Indeed, it was a very brutal, unpleasant, but creative and masterfully produced piece of theatre to experience.

Crazy Gary’s Mobile Disco starts with a disarmingly simple premise. Three men, who appear to have no relation to one another, tell three distinct stories to the audience. This is something that Director Matt Owen ingeniously reinforces by segregating the piece into three alternative venues: the top floor of Kelsey’s, a living room of one of the cast members and a dingy alleyway. The three narratives, at first glance, appear to be loosely tethered together by a Thursday at the local pub-disco night or, at least, what should be disco night – but we’ll get to that in a moment.

Gary stuck with the audience like a knife to the gut

As the piece continues to flow, shifting from speaker to speaker and growing bleaker and bleaker as it does, so the hidden bonds shared by the three men are unveiled in a manner so harrowing and terrible that it would put Sophocles to shame. Little details – a dropped coke bottle here and a chance meeting there – culminates in one final, bloody, catastrophic, yet bizarrely cathartic final scene.

First we are introduced to the titular Gary himself. Even before the menacing and charismatic Tom Kingman delivered the first line of dialogue, I was transfixed by the set. A row of crimson chairs, dull red lights, and shadows that only thickened into loathsome black stalactites once Kingman slammed the door shut, sealing the audience in. Gary is a failed rugby player, a bullying thug and a hopeless romantic, all rolled into one, yet Kingman flits from each of these personas, both psychotic and sympathetic with natural ease. He held the audience’s attention from his very first line: “Right, f*ck it…I’m gonna tell you how this ends right now.” Gary tells the audience of how he met “the perfect girl” after bullying his way into a party only to be tempted and tested by the enigmatic Mary. In this passage, we observe the high and low points of Gary’s life, such as his deranged fixation with dominating “my disco night” as well his reluctance to reveal when he is emotionally vulnerable: “I got something like grit in my eye.” Compelling (if not frightening) in his own story and a potent antagonist in a later tale, Gary stuck with the audience like a knife to the gut.

Following this, Mathew D. Melody, played by the chirpy, loveable and disturbing (oh, you have no idea) Matilda McCarthy arrived to ferret the audience past puddles and precarious traffic crossings to a comfortable living room. Once we had arrived Mathew made us all tea before launching into his tragic tale of unrequited love, mental instability and repressed anger. Indeed, as fantastic as Matilda’s portrayal of the character was, the initial sweet-natured Matthew grew increasingly difficult to like. One of this character’s first lines is “I see a modern tragedy unfolding before my eyes”, yet the only “modern tragedy” that unfurls before the audience is the life of the ironically named Matthew D. Melody himself. After claiming that he has the power to “sing love back to life”, Matthew’s delusions are undercut by the revelation that he is unemployed, on welfare (“If you won’t consider a job you could actually do then you aren’t seeking employment”) and appears in the early stages of a relationship with a woman that is most certainly not single. Matilda conveyed the emotionally repressed, volatile and bitter tragicomedy of Mathew D. Melody’s life with energy, charm and surprising menace.

Last but certainly not least, the mortified and uncomforted (though, admittedly entertained) audience was escorted by a pensive, black clad and chain smoking Russell Markham to a damp makeshift den underneath a bridge. With the roar of trains howling in the background, Russell told the audience about his psychologically abusive partner and his traumatic school years. Russell was played with a nervous caged energy by Teddy Davis. Dismissive, sloppy, passive and bursting with compressed rage, Russell’s narrative is the bow that ties these three fragmented narratives together – towards a conclusion that is violent and powerful whilst hinting at the smallest possibility of salvation: “If I can’t take leave psychically I can at least take leave of my senses.” Teddy Davis alternates between this tormented persona and a truly petrifying girlfriend who serves as a spectral figure across more than one of the character’s narratives.

Overall, Crazy Gary’s Mobile Disco proved to be another powerful performance by Pound of Flesh theatre, achieved by a talented cast, creative locations, effective use of complementing technology (the credit for which goes to Kate Chalmers and Tilly Kaye) and a clear vision that was relayed to the audience by director Matt Owen. I look forward to seeing what this company will get up to next.