When we think of climate change, we typically think of melting icebergs, disappearing polar bears and plastic oceans. What we tend to overlook is the human aspect of climate change, specifically the impact on the indigenous peoples of the earth. According to the United Nations (UN), climate change threatens the survival of these communities globally, despite them contributing the least to greenhouse emissions. Their relationship with nature and their reliance on its resources put them at high risk as global warming increasingly affects their environments. Deforestation, rising sea levels, and disruption to the delicate animal food chain all pose serious challenges to their way of life.

The indigenous population of Latin America have felt the effects of climate change in a way that very few others have. Within the Colombian Amazon alone, the indigenous population totals around 100,000, consisting of 52 distinct ethnic groups. Increased logging activity and cattle farming in the Amazon has drastically reduced the size of their home. The Guardian reports a 278% increase in deforestation activity in the year 2019 alone. Scientists predict that the rainforest will completely vanish within 50 years’ time, resulting in thousands of indigenous inhabitants becoming homeless, vulnerable and isolated.

But it’s not just the shrinking of their environment that’s an issue. Rising river levels caused severe floods in the Amazon in 2005, disrupting the local fishing industry – their livelihood – and depleting their food stock. Forest fires in Brazil and Bolivia, sometimes caused by excessive heat, and other times deliberately started by illegal loggers, released vast quantities of smoke, which the inhabitants of the forest were dangerously exposed to. Changing weather patterns directly affect the harvesting of wild fruits too, and the people and animals who depend on this for food. With around 2,000-10,000 animal species going extinct each year in the Amazon, this disrupts the already delicate food chain and ecosystems. Traditional hunting activities are therefore compromised if their prey no longer exists.

Indigenous people’s centuries-old knowledge of nature and their landscape gives them extraordinary insight into how global warming is affecting the environment, and gives them the tools to adapt and fight back against this change. According to a report by the UN, indigenous peoples in the Central, South American and Caribbean regions are moving their agricultural activities and their settlements to new locations which are less vulnerable to fluctuating climate conditions. One example is the indigenous peoples living in the Republic of Guyana, who now relocate from their savannah environment to expanses of forest during the drought seasons in order to avoid excessive flooding, and have started to plant the crop cassava on wet soil that is usually too water-saturated for other crops to survive in.

Yet indigenous people are rarely considered or even consulted by governments when formulating climate change legislation and measures to tackle this issue. The indigenous inhabitants of the Ecuadorian rainforest, who had witnessed the loss of their biodiversity and instead gained a substantial level of greenhouse gas emissions thanks to the Amazon deforestation, were not included in the 2005 Reducing Emissions from Deforestation and Forest Degradation (REDD+) project by the UN.

Shockingly, one of the main selling points of this project was that the rainforest was advertised as a great source of economic investment. With money used as an incentive for people to leave the Amazon alone, this is a dire affront to the integrity of the rainforest and the rights of those who have inhabited it for centuries. In other words, it was apparent that the only perceived value of the forest was in GDP, as opposed to the spiritual and ancient value it holds for its residents, plant life and animals.

Climate change is only just beginning to be recognised as a human rights issue, instead of solely an environmental crisis

It is common sense that indigenous groups would be better adapted to protecting and nourishing their environments than any state-sponsored initiative would be. Since the 1980s, a policy of indigenous protection has brought about the creation of 92 indigenous preserves, or resguardos. These preserves now are roughly equal to 247,000 kilometres, and are essential for the survival of the rainforest. This is still no guarantee that the lands will be safe, as more and more indigenous peoples are having their lands taken away from them to make room for sugar cane plantations which are converted to ethanol to make bio-fuels.

Climate change is only just beginning to be recognised as a human rights issue, instead of solely an environmental crisis. While those who live in urban areas may not feel the full effects of global warming yet, indigenous peoples of the world are the most exposed to the violent fluctuations of weather. Their very survival depends on the actions that we take today to ensure they will have a future in the decades to come, as every human being deserves. Governments and the media need to be more proactive in putting a human face on climate change – or the most vulnerable people of the earth will may the consequences of our ignorance. 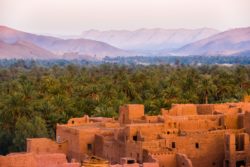 Only two countries on track to meet sustainability goals

The LGBT+ fight for climate justice

A sinking city, the Jakarta floods