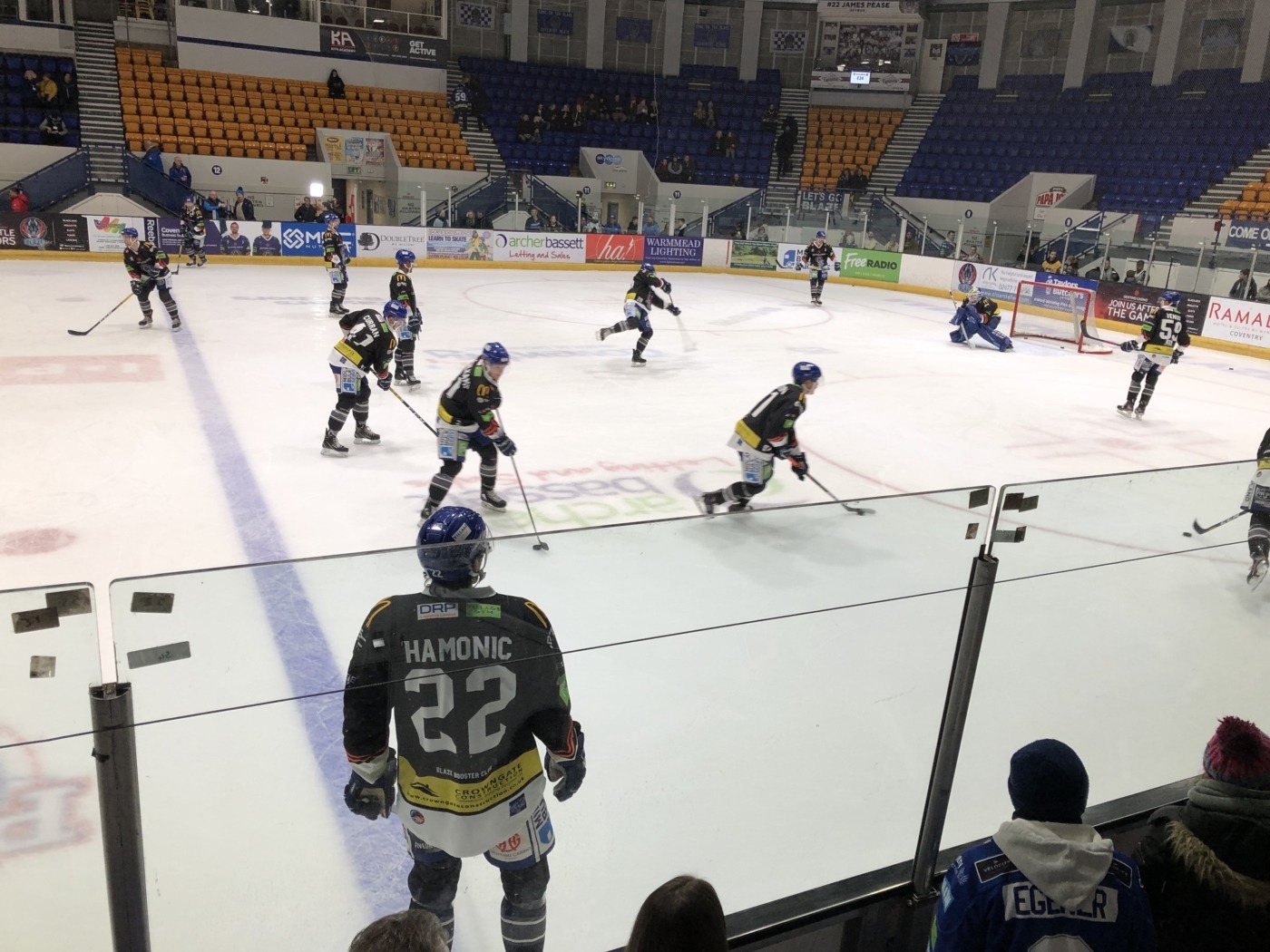 On the night Coventry city centre switched on its Christmas lights, marking the official start of the city’s calendar of festivity, Manchester Storm exited the Skydome Arena with a place in the quarter-finals of the Challenge Cup at the expense of Coventry Blaze. In a ‘Play-In’ match that the hosts were expected to win, a sluggish first period cost the Blaze, as a late defensive error gifted Manchester Storm a 3-2 win on their travels.

The format of the Challenge Cup was revised for the 2019/20 season to accommodate for Milton Keynes Lightning’s demotion to the NIHL, meaning that the two ‘best losers’ from the Group Stage were given a second chance to progress to the quarter-finals through a winner-takes-all ‘Play-In’ round reprieve. Coventry Blaze, owing to their superior record in the Group Stage, won the right to host Manchester Storm in the ‘Play-In’ match, making the hosts the favourites to progress.

Despite starting the game brightly, testing Matt Ginn in the Storm net during the opening exchanges, the Blaze fell behind on 12 minutes courtesy of Adam Hughesman, who was on hand to tap a rebounded shot beyond the reach of Jamie Philips. Storm scored their second of the night within two minutes; again, as Hughesman was gifted enough space and time on the puck to neatly fire past Philips on the pad-side.

The Blaze’s brightest moment in the first period arrived with just three minutes remaining on the clock. After a sustained period of possession within the Storm blueline, Evan Bloodoff forced a fine save from Ginn – who was sent scrambling across the crease to prevent the Blaze from getting back within one.

Nerves crept into the Skydome crowd

An early penalty-kill for the hosts seemed to give Danny Stewart’s side the confidence they lacked in the second half of the first period. An Alex Forbes hooking minor yielded few chances for the Storm on their powerplay, a missed opportunity they would soon come to rue when John Negrin was sent to the penalty box for holding.

The Blaze’s first powerplay of the match brought the return of deke-orientated hockey to the Skydome as Charles Corcoran and Johnny Curran combined to mount pressure on the visitors. With moments remaining in the powerplay Matt Pohlkamp evaded the attention of the stretched Manchester Storm penalty-killing unit, allowing him to fire the Blaze back within one with 33 minutes on the clock. The remainder of the second period proceeded largely without incident, as nerves crept into the Skydome crowd.

During the final intermission of the night Stewart’s roster would have been aware that they were now in the ascendency, with a golden opportunity to progress to the last eight if they could score early in the third period. Blaze captain, Drew Schiestel would not have expected his speculative effort to find twine when he pulled the trigger from the blueline, but his shot snuck past Ginn on 43 minutes to tie the game.

Ginn would certainly like to have had a second attempt at stopping Schiestel’s bouncing effort, had his teammates not been able to find a way to retake the lead late in the third period. Ginn’s blushes were spared, however, in the 57th minute of the play as a defensive mistake from Philips in the Blaze net gifted Layne Ulmer the opportunity to win the match for his side. Philips’ failed clearance left the Blaze netminder stranded outside of his crease, allowing Ulmer to find top shelf relatively unhindered.

It wasn’t our day – Janne Laakkonen

A late push from the hosts was not enough to force the game into overtime, with a 3-2 defeat on home ice spelling an end to the Blaze’s participation in the EIHL Challenge Cup. After the game Janne Laakkonen was unflinching in his assessment of his side’s cup exit, congratulating the Storm on a good performance, while acknowledging that “it wasn’t our day”.

The Blaze will hope to return to winning ways this weekend as they travel to Dundee on Saturday, before a home fixture against Sheffield Steelers on Sunday evening.