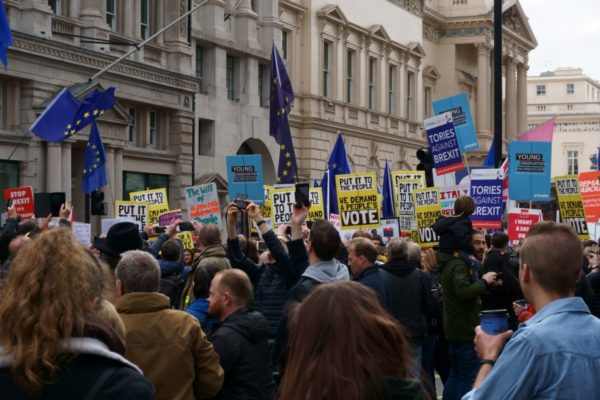 The Brexit picture book for children

Brexit. A word heard so frequently in the midst of this current political climate that it’s typically followed by a sigh. However, is it a word we hear the younger generations using? Many children appear to be turning to their parents in an effort to understand Brexit. However, 32% feel they couldn’t explain the situation to their child if asked, according to a recent survey. To combat this, some have turned to children’s storybooks for the answers.

A picture book explaining Brexit for the younger generation has been released. I Want to Leave the Book by Richard Lawman is aimed at children but is also useful for their parents who struggle to explain the current political climate. Lawman felt the need to write his story after he found he couldn’t explain Brexit to his 4-year-old and needed a way to try and make the situation clearer.

The book follows a group of animals who can’t decide whether or not they want to leave the story they are in or remain. A vote is cast and the majority vote leave. However, they cannot agree on what genre of book to join after they leave their current story. Consequently, arguments begin, and chaos ensues.

The book claims to be impartial. However, specific political figures are represented by certain animals: David Cameron is a pig; Theresa May a hamster; Boris Johnson is a highland cow. Questions have been raised regarding a political bias in the picture book thanks to the images that these depictions portray. Others have attributed the choice of Cameron’s character to the infamous scandal regarding his Piers Gaveston Society initiation. If this is the case, although some may find this amusing, such a reference is crude given that the book is targeted at children.

The book triggers the question of how important it actually is to try and explain Brexit to children. For Lawman, his book is “the answer to [his] dilemma” and his view is shared by 89% of those surveyed, agreeing that children should be educated on this important aspect of our political history. The use of an animal story is comparable to classic children’s books like The Gruffalo or The Very Hungry Caterpillar. Animals create a friendly, charming environment, and here they provide a warmth to the serious topic at hand.

In the event that Brexit actually happens at some point in the near future, it’s important that children understand what is happening as it is likely to change the history of the country for ever. The use of a picture book to simplify what confuses even adults seems like a sensible method of teaching. Lawman argues that it is important “to make these political issues as digestible as possible to ensure that younger generations truly engage and understand the wider moral backdrop of these events”.  If and when we do leave the European Union, it is essential that everyone can understand what is happening and why this decision has been made. The book also features a glossary to help parents explain key words to their children. Lawman hopes that his book will be “fun to read even without the Brexit context”.

But this isn’t the first attempt at a Brexit themed story book. Smriti Prasadam-Halls released The Little Island at the start of October which follows the ducks and geese on a farm who are split as to whether or not to leave or remain. Some have referred to Prasadam-Halls’ book as “Animal Farm for the Brexit generation”. Her story has proved popular amongst readers and the author herself feels it will work as a means of explaining the situation, as the pictures allow us “to parody ourselves and effortlessly raise questions”.

Politics tend to take over everything and it isn’t uncommon for children to be navigating political issues from an early age. Although parents will make their best efforts to explain Brexit, perhaps an impartial picture book might just be the ticket, and maybe it is best for open minded children to try and understand Brexit themselves through the medium of an animal adventure.

Gallery image with caption: The lack of recognition for the authors of our childhood

Gallery image with caption: Brexit named as Children’s ‘Word of the Year’ 2019