Into the rural heartlands of English literary festivals marches Kerry Hudson: working class icon and author of the book Lowborn. No stranger to travelling around, Hudson spent most of her childhood looking for a better life with every town her family moved to, living in B&Bs and council flats. Now a successful novelist, I saw her at the Kenilworth Arts Festival in conversation about her upbringing, as told in her best seller.

Hudson is quick to assert that poverty is never fun. She talks about the shame of being born poor, the stigmas that abound labelling working class people as “feckless and lazy.” “It wasn’t all flat caps and small boys delivering you a Hovis loaf,” she quips, then adds “we were never proudly poor”.

An emotive account, it remains “truthful, fair and accurate,” Hudson’s aims for the narrative

Having left her job working for an AIDS charity to become a writer, Hudson had two successful novels before writing Lowborn. She says she felt compelled to write it after reading so many literary depictions of working class people written inaccurately, and often judgmentally by the well-off. It’s a writing process she describes as “life-changing.”

It’s a book about the real struggles of growing up with very little, the reality of day to day life and the consequences of genuine lack in the UK today. An emotive account, it remains “truthful, fair and accurate,” Hudson’s aims for the narrative.

And the literary crowds are lapping it up. Hudson is selling her story at an RRP of £14.99 and the middle classes are lining up to get their hands on a copy, giving up their capital to have their privilege checked in a kind of reverse effect of the Jeremy Kyle Show – a show, Hudson notes gleefully, that was axed in the week her book was published.

This isn’t a miserable tale of grief stricken plight, but neither is it a good ol’ knees-up singing in the face of poverty

She comes across as an incredibly intelligent, socially aware person, cautiously conscious of her newly acquired privilege as a successful author. But she isn’t bitter. I asked her if she felt angry at the inequality and missed opportunities she’s faced. “Sometimes,” is her answer, “Everything every novelist has had to do, I’ve had to do it backwards in heels.” But rather than letting that anger rule her, Hudson recommends: “take that energy and turn it into a way to help the community.”

And that’s the message she leaves us on. This isn’t a miserable tale of grief stricken plight, but neither is it a good ol’ knees-up singing in the face of poverty. Hudson’s real life encounter with 21st century poverty has the power to move, inspire and change the world. And it’s made it as far as the parliamentary recommended reading list, so here’s hoping.

Kenilworth Arts Festival returns with a range of events for 2019 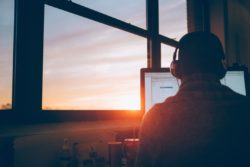