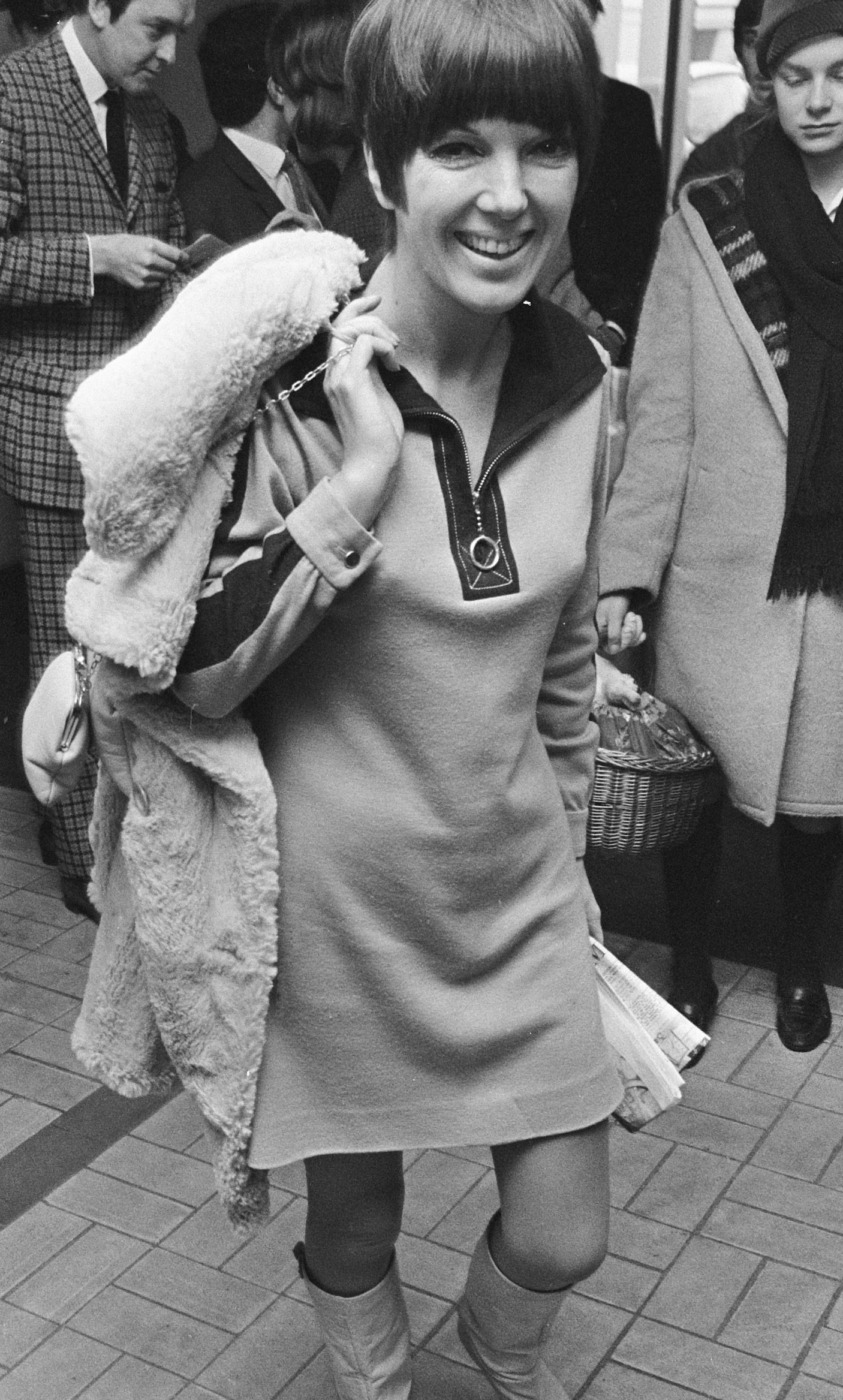 Swinging back to the 1960s: Mary Quant and the revival of the miniskirt

Until the 1950s, girls dressed like children until they started dressing like their mothers. There was no experimenting with personal style or exploring their adolescent identities. The prescriptive route of fashion emulated the gender roles of the time – women should marry and be a good housewife, or get a respectable job in an appropriate profession like teaching or nursing. But then came the 1960s – an era of dynamic social change.

The Age of Austerity was over, rationing finally ended, living standards were improving, and drab post-war Britain was finally beginning to see a bit of colour. Young women aged between 16-25 were entering the workforce in droves, and suddenly a brand-new social group began to emerge. With their large disposable income, these young women became the target market for a whole new type of fashion driven by none other than Mary Quant.

It became a symbol of a feminist movement that was campaigning for reproductive rights, equal pay, better opportunities and improved childcare

For most people in Britain, Quant’s name is synonymous with the miniskirt – a name coined by Quant herself after another iconic 60s symbol – the Mini. Whether or not she actually created it is up for debate (André Courrèges is usually credited as the first designer), but she certainly made it the absolute fashion staple it is today.

The miniskirt emerged in the 1960s as a rejection of the modest, more reserved styles of the 1950s. It became a symbol of a feminist movement that was campaigning for reproductive rights, equal pay, better opportunities, and improved childcare.

Women’s activists, such as Gloria Steinem, wore the miniskirt to symbolise femininity and a rejection of tradition while they were marching and protesting for the Women’s Liberation Movement. Fashion embodied the spirit of the wider social and political freedoms that women were beginning to gain as they entered the workforce and took control of their reproductive health.

Stephanie Wood, curator at the V&A, discusses how ordinary young women wore the miniskirt with incredible confidence. These women actively challenged the stifling rules and oppressive conformity of their mothers’ generation.

Colourful tights kept newly exposed legs warm and fashionable, and PVC raincoats made even the drizzliest of days bright

In her own words, Mary Quant “didn’t have time for women’s lib”. Instead, she would liberate women herself, starting with what they wore. 1950s wasp waists and their restrictive girdles were out, flapper-style dropped waists were in. Delicate silks were replaced by comfortable jersey. Demure knee-length skirts had two new sexy alternatives: trousers and miniskirts.

The genius behind Quant’s designs came in their playful practicality. The miniskirt was designed with freedom in mind. It was comfortable and allowed for movement, whereas longer styles were more restrictive. The short hemline meant girls could run for the bus and it was designed to be worn with flat shoes, a marked difference from longer skirts that required heeled shoes. Colourful tights kept newly exposed legs warm and fashionable, and PVC raincoats made even the drizzliest of days bright.

Quant did not care about exclusivity and elitism – instead, she wanted every girl wearing one of her designs

The outfits of the 1960s were perfectly adapted to city life and brought fashion away from the snooty Parisian ateliers to the streets of swinging London. Quant did not care about exclusivity and elitism: instead, she wanted every girl wearing one of her designs. She was one of the first pioneers of mass-market clothes, and even sold the paper patterns for her designs, so strapped-for-cash creatives could make their very own Quant clothes at home.

This was not just about the garments themselves; Quant was building her very own lifestyle brand. Her daisy logo was emblazoned on everything from make-up to homeware to her own line of ‘Daisy-dolls’. A visit to her shop Bazaar on King’s Road was almost like attending a party – loud music, drinks, late opening times – in a carefully curated kooky setting.

Her window designs were fun and outrageous, including a dead lobster on a leash and Harley Davison motorbike. This vibe is something major fashion brands now try to emulate in their own stores with disco-style décor, Top 40 Hits blaring from speakers, photobooths, and food and drink stalls: all to create the illusion of cool which Mary Quant emanated so effortlessly in the 1960s.

Her models weren’t just clothes horses, wearing her clothes on the front of prim catalogues, they were the social media influencers of the day

Quant’s love of Peter Pan collars and bright colours meant every collection took on a youthful, almost childlike quality. This was fashion for the girl who didn’t really want to grow up and settle down, but who wanted to explore all aspects of her newfound freedoms – financially, socially, and sexually. Known for her cutting-edge Vidal Sassoon bob, party girl lifestyle, and shaving her pubic hair into a heart and dyeing it green, Quant’s progressive attitude situated her at the centre of what became a global ‘youthquake’.

Her models weren’t just clothes horses, wearing her clothes on the front of prim catalogues, they were the social media influencers of the day. Twiggy and Jean Shrimpton became household names, embodying the ‘Chelsea Girl’ vibe of the whole brand.  Pop culture saw a complete shift in its demographic, becoming wholly driven by young people, just as it is today.

Modern fashion has a lot to thank Mary Quant for. She completely revolutionised the way women view fashion in every way; from the way we go shopping to the way we express our personality and sexuality through clothes. Her clothes never go out of style, with various updated versions of her innovations appearing each season.

Hems rose higher on the Spring/Summer 2019 catwalks, with designers such as Louis Vuitton, Prada, and Burberry all swinging back to the 1960s in their designs

Hems rose higher on the Spring/Summer 2019 catwalks, with designers such as Louis Vuitton, Prada, and Burberry all swinging back to the 1960s in their designs. Miniskirts are now worn in a number of different ways, such as with oversized hoodies.

And it’s not just miniskirts that are coming back. 2019’s trend of block heels and vinyl jackets wouldn’t look out of place on King’s Road in 1963, and almost any item in Mary Quant’s original collections would look just as fashion forward now as when it was bought 55 years ago.

As Celenie Seidel, senior womenswear editor at Farfetch, has said, women are looking at a more “playful and optimistic way of dressing again”. In the 1990s, third wave feminism led to greater workwear and utility in women’s fashion, but now, women are dressing for fun again.

In the climate of the #MeToo movement and women taking ownership of their bodies, we want to be free to wear whatever clothes we feel beautiful in

Over the decades, the miniskirt has come under criticism from feminist campaigners as it became associated with a sexualised image of femininity. Critics of the miniskirt claimed that it was a distraction from the feminist movement, promoting the sexualisation of women.

However, this might explain the resurgence in popularity for the miniskirt in 2019. In the climate of the #MeToo movement and women taking ownership of their bodies, we want to be free to wear whatever clothes we feel beautiful in. Fashion is a way for women to express their femininity, enjoy the way they dress and take ownership of their own bodies. The miniskirt continues to be a symbol of defiance.