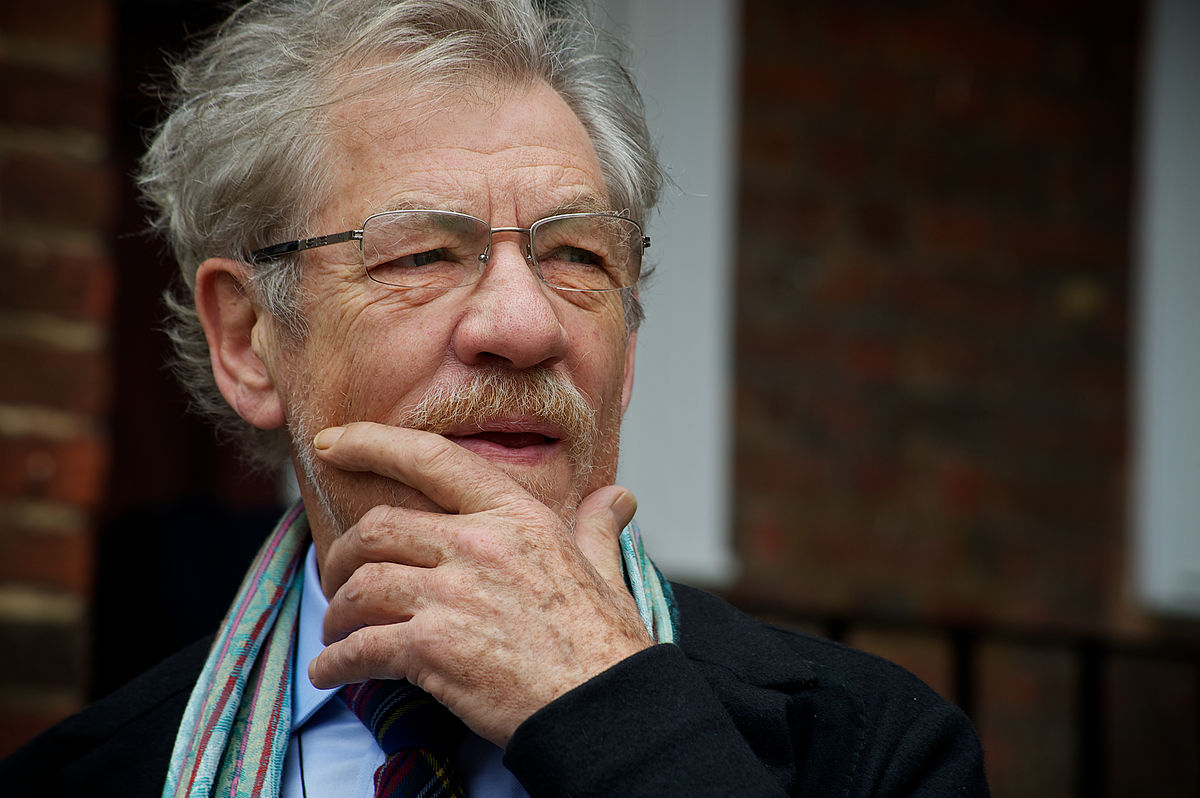 “An intimate and beautiful performance” : a review of ‘Ian McKellen on stage’

Sir Ian McKellen’s huge tour of the country ‘Ian Mckellen on Stage: Tolkein, Shakespeare, and You!’ hit the Warwick Arts Centre back on May 19th. Having been on tour since February, and continuing until late August, one might expect that, as an 80-year-old man, part of McKellen may be struggling a little at this point. But any doubt in him was short lived, as he burst onto the stage with a reading of the Balrog scene in J.R.R Tolkien’s The Lord of the Rings – a favoured scene amongst fans of the films. The voice of Gandalf bellowed to the back of the theatre, as McKellen’s lack of any microphone showed his impressive history as a Shakespearean actor; something that would be fully demonstrated later on. Wearing jeans, a blazer, and a bright blue scarf, McKellen proceeded to treat the stage and audience as old friends.

And this is exactly what the performance was; a celebration of an incredible actor, who continues to set up the stage throughout the evening with meaningful possessions, sharing many heart-warming anecdotes and some of his favourite performances. A huge box sat to one side of the stage, covered in a colourful range of stickers from the theatres McKellen had visited thus far, and from which he pulled out a delightful array of props over the evening. One lucky young fan was even given the opportunity to pose with Glamdring, Gandalf’s iconic sword from The Lord of the Rings films, which McKellen was allowed to keep.

Such anecdotes reflect the richness of the actor’s life

Following the Balrog monologue, he proceeded to share that he had in fact never read the fantasy novels prior to receiving the call from Peter Jackson, much to the chagrin of fellow actor and huge fan of the series, Christopher Lee, whom actually wished to play the role of Gandalf himself. Such anecdotes reflect the richness of the actor’s life, whom, throughout the evening, told tales of his time as a child discovering the theatre, and then as a young man at Cambridge – before revealing the trials he faced being gay in times that were very uncertain.

Intimate moments were shared, such as revealing to the audience that he waited until his late forties to tell his step-mum that he was gay, only for her to tell him that she already knew. McKellen reflected on his sadness that so many years had been wasted in fear of her reaction, only for her to know and be comfortable with whom he truly was. This was of course interspersed with lighter moments of genuine laughter and affection from the audience, such as hearing how often his name is misspelt, and his fears over it being mispronounced at his Knighthood ceremony.

While the stories of his life were delightful to hear, the performances of the evening were what truly captivated the audience. Lord of the Rings appeared to be just the beginning, as McKellen performed some of his favourite poetry, monologues from various plays, and indeed an entire monologue as the Dame Twanky from his performances in various pantomimes. A scarf over his head, and a bag over his shoulder, McKellen strutted up and down the stage, transforming the audience instantly into a pantomime audience, throwing sweets and demanding interaction. By mixing this lighthearted humour in with the more serious notes, McKellen truly demonstrated his incredible versatility as a performer, sharing his highlights from over sixty years on stage.

McKellen truly shone in his enthusiasm and passion for Shakespearean theatre

The true highlight for myself, however, was the second act, in which McKellen asked the audience to name all of Shakespeare’s plays. Having them all in front of him, there was not a single play where he did not have something to say. Whether performing entire scenes, such as the iconic balcony scene from Romeo and Juliet (committed to memory and performed beautifully) or sharing stories and facts from other performances he had seen over the years. A true Shakespearean actor, the audience managed to name all of the plays, and McKellen truly shone in his enthusiasm and passion for Shakespearean theatre.

At the end of the evening McKellen informed that the proceeds of his tour were going to charity, with the chosen charity of tonight being a local cause to get young people involved with theatre. McKellen himself took donations, holding a bucket out and thanking audience members for coming. As a huge fan of McKellen, having written to him back in my early teens (receiving a signed letter and photo, which remains in my bedroom to this day), and having seen him perform in various plays, I took the opportunity to thank him for a wonderful evening and put some change in his bucket. McKellen, for me, remains one of the most versatile and incredible actors the world has ever seen, and I am incredibly grateful for having been able to see him in such an intimate and beautiful performance.