Literary elitism is not a new phenomenon. In fact, it takes only a small break beyond the surface to realise that our whole understanding of classic literature, particularly British literature, is shaped by the social elite. World literature will never be able to be accurately measured and understood when we consider the amount of literature which, over the centuries, has been lost or is unpublished. This means that often our access to classic literature, and thus our lens into the past, is shaped by those who have the time and access to publication. In 19th century Britain, this comes exclusively from the elite factions of society.

If we are to consider the works of Dickens or of the Brontë sisters as a lens into exploring 19th century Britain, we are left with the view of life from an exclusively middle class perspective. While this is not to dispute the literary ‘greatness’ of these works – I’ll leave that to the reader to decide – it doesn’t provide us with a wide range in which to look at the world at this time. It also indicates that the many lost writers may have been amongst the ‘greats’ had they simply had access to publication and readership from elite factions of the society. Literature is, after all, something to be read for pleasure and not simply a historical artefact.

Indeed, publication of minority authors and those from the working classes has increased

Nowadays, we like to think of ourselves as more considerate of those beyond the social elite, wanting to hear stories from more members of society than simply the white upper and middle classes. Indeed, publication of minority authors and those from the working classes has increased. We all know the heroic tale of J.K Rowling, struggling to make ends meet before becoming one of the world’s wealthiest women after her inspiration with the Harry Potter series.

However, reality shows that the access to producing literature in British society is still significantly driven by elitism: in the Author’s Licensing and Collecting Society’s annual survey, findings built on the report that the average professional author has median earnings of £10,500 a year. This year’s report indicates that, although a writer might earn £10,000 a year, putting them well below the earnings of someone on full-time minimum wage, the mean earnings of their household income were more than £81,000 a year, while the median was roughly over £50,000 per annum.

By itself, £10,500 is not enough to independently have a decent standard of living by which it is possible to produce literature

This indicates that solely being a professional author is not suggestive of the majority of authors being in the working classes, but rather that, as the report states, “most writers supplement their income from other sources, such as a second job or household earnings contributed by a partner”. Thus, the income of solely £10,500 applies only to those without access to these options and jobs that garner greater income. By itself, £10,500 is not enough to independently have a decent standard of living by which it is possible to produce literature, and thus underprivileged authors are significantly disadvantaged in being able to tell their stories.

Kit De Waal, the editor of a new anthology comprising working class voiced called ‘Common People’, summarises the problematic nature of these findings: “It puts a limit on people who can consider writing as a profession”. She stresses that those who might have the most to say, for instance those facing the greatest level of societal injustice, do not have the option to say it because the likely income they will accumulate is not enough for survival. This means that stories exclusively come from the social elite even if they have a less illuminative input on contemporary society. Indeed, common phrases put out to writers, such as the J.K. Rowling narrative of tolerating the struggle due to the love of the literature produced, only caters to inspiring the elite.

For most authors, no matter how valuable their work is, this won’t be the case, and thus a ‘love’ of their literature is not enough to massively compromise their standard of living

The JK Rowling narrative speaks to the one in a million case that the author can succeed to the extent where they transcend social classes. For most authors, no matter how valuable their work is, this won’t be the case, and thus a ‘love’ of their literature is not enough to massively compromise their standard of living.

There is a significant risk here of losing great perspectives due to the issue of social elitism, no matter how much we like to pretend that art can transcend the day-to-day structures of society. Not having a broad range of literature is limiting to our social education: growing up in one area of the country may mean that you do not have the opportunity to walk in the shoes of somebody who has less than them, contributing to a divisive lack of empathy. Even without taking an academic or political spin on this elitism, should everybody not have the right and the agency to produce art?

Alternatively, authors won’t be forced to divert their energy into other means of work which prohibits them from their writing time

Beyond social commentary, the limitations of authors could prohibit us from experiencing the best children’s stories or the best fantasy stories that may even rival the Harry Potter series. With any luck, the current statistics relating to this will not simply serve to maintain a literary elitism, where only the middle and upper classes are encouraged to exercise their passion. Alternatively, authors won’t be forced to divert their energy into other means of work which prohibits them from their writing time. Instead, writer’s wages from publishing companies should be adjusted in order to eradicate the overwhelming evidence that literature is a passion only available to the elite. 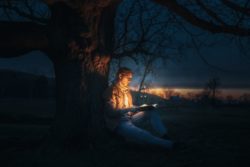