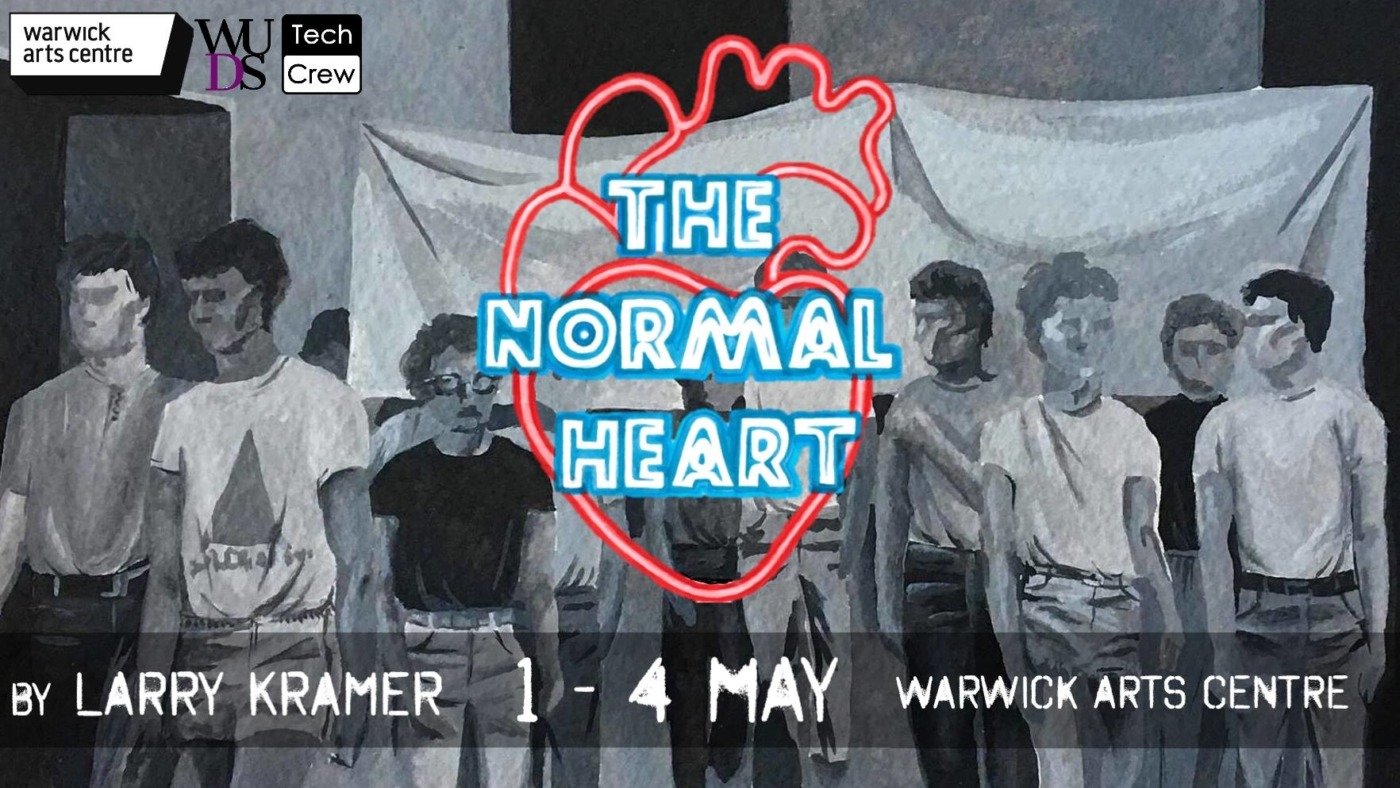 Larry Kramer’s The Normal Heart is a heart-wrenching play that deals with themes of loneliness, mortality and hopelessness; alongside issues surrounding gay rights, Jewish rights and the AIDS epidemic. Currently being staged by WUDS at Warwick Arts Centre, the show is co-directed by Aaron Chote and Theotima Ioannou. The performance was both honest and powerful, handling the importance of the subject matter with sensitivity and care.

The Normal Heart takes on the AIDS crisis sweeping New York in the 1980s. The story follows Ned Weeks (played by Adam Wilmshurst), the founder of a prominent HIV advocacy group, who is working to instigate change in an ignorant and ostracising society. Whilst struggling to hold his position, not only within society but also within the group that he founded, he goes on an emotional journey with his closeted lover Felix Turner – which progresses into a beautiful yet ugly mess.

The performance was both honest and powerful, handling the importance of the subject matter with sensitivity and care

The main credits of this production go to Wilmshurst and Tom Fletcher for their roles as Ned and Micky Marcus respectively, and their compelling and dynamic performances. Wilmshurst in particular delivered an emotional and passionate embodiment of Ned, demanding the audience’s attention throughout, and commanding the action on stage wherever he was present. From his physical embodiment of the character to his projection and execution of Ned’s lines, he never broke character, and gave a believable performance of both Ned’s aggressive and sensitive moments.

Fletcher brought light to his performance, and gives the audience some sort of relief to hold onto in the upheaval and bleakness of the play. His energy throughout carried the performance and, at times where the energy level seemed to slightly drop, as soon as Fletcher walked onto the stage he picked the energy back up. The second act sees Micky finally subdued by the weight of the turmoil going on around him, and the breakdown of this character was, for me, the first time the performance felt truly heart wrenching – a testament to Fletcher’s acting ability.

Brilliant acting was also seen in smaller roles, such as Selwin Hulme-Teague’s Craig in the opening scenes. His energy, accent, projection and physicality captures our attention from the beginning, keeping the entire audience engaged and focused on his character. I enjoyed his performance so much that I wished his character had come back and that we got to see more of him. Ellie Leyshon played Dr. Brookner with a fantastic accent and articulation, and Guy Jack (playing Ben Weeks) had an excellent scene with Wilmshurst in which the anger and frustration in both characters was compelling – making for one of the most powerful scenes. The connection between the two as brothers was believable and an interesting relationship to watch and explore. Jack’s outburst within this scene showed a different side to the character which he played well.

The breakdown of this character was, for me, the first time the performance felt truly heart wrenching

The direction of the play was excellent, and I could tell that the directors worked well together and have formed strong bonds with the cast – a connection that I think helped to strengthen the actors’ performance.

But the creative team also added to the production immensely. The stage was essentially set up into three sections: a living room, dining room and a hospital room/call centre office. I found this layout both clever and aesthetically pleasing, and it allowed the maintenance of the pace of the performance due to quicker transitions between scenes. This created an almost ‘bubble’ like feel to the play, which worked well alongside its message. The lighting was also cleverly done, keeping the central door at the back of the stage almost always lit, and drawing attention to the location of the action. The way the light shone off the white hospital floor created a clinical atmosphere which contrasted with the rest of the lighting of the show.

The costumes embodied the 80s perfectly, which not only clearly identified when the play is set, but also helped to immerse the audience in the production. Music was used very effectively within the piece. It helped to pick up the energy at times and kept the audience engaged, as well as adding humour to particular scenes and setting the tone at the climax. The use of audio recordings from the 80s for scene changes was also effective and helped to keep the audience both informed and engaged – even when nothing was seemingly ‘happening’ on stage. The transitions were mostly quick and so the blocking must have been efficient.

I do, however, think that some scenes needed more movement, as there was often a heavy weight of simply sitting around, which slowed the pace of the show. With a running time of almost three hours, the play felt very long, and although I was never bored, I did find myself itching to stand up and stretch my legs during the transitions. Whilst I think this is more to do with the writing than the performance, perhaps more movement and use of levels within particular scenes would have helped to maintain the dynamism that we saw elsewhere in the production.

The Normal Heart was a breath-taking production by an incredibly talented team. The directors approached such a hard-hitting topic with grace, care and sensitivity, which is highlighted by the actors’ brilliant portrayal of what this epidemic was like in the 80s. The audience was highly tentative throughout, which proves just how captivating the nature of the performance was. The dynamic power of the raw emotions portrayed, combined with the incredible set and costumes, makes this a must-watch show. Although we’ve come so far from the attitudes in this play, it is important to remember where we started, and this show is a beautiful reminder of how love can prevail in times of crisis.