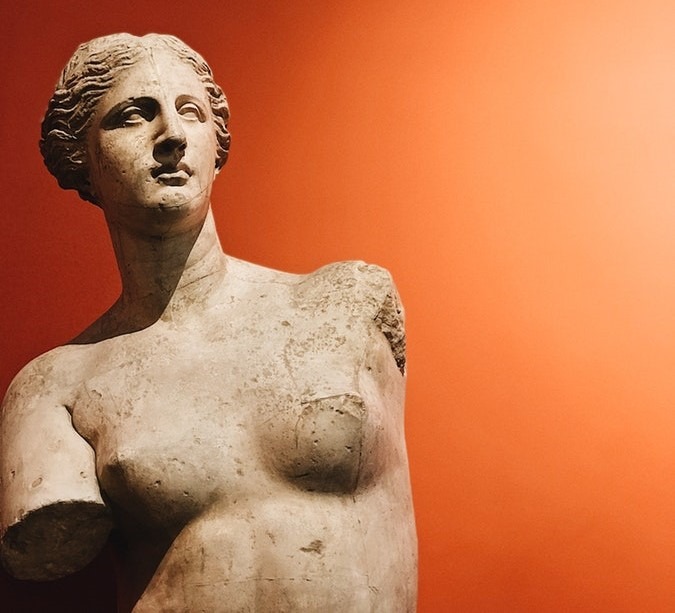 For centuries the female body has been an obsession in art. Many artists have used the female form as a muse or medium, around which they create and explore. However, the extended period of time throughout which this has been the case, combined with the ever-changing nature of the art world, would surely lead us to hope that representations of the female form have evolved.

One great difference is how the female form is presented. Canova’s neo-classicist sculptures depict a female form far from what we see today in fashion photography. In his works, Canova often sculpts the female figure with curves, stomachs and thighs, portraying what some would argue as a more realistic human form. This exposes how the chosen depiction of the female figure that makes it into the art world does so because it corresponds to the specific beauty standards and ideals of an era.

Many artists have used the female form as a muse or medium, around which they create and explore

However, this is not to say that Canova’s representation is the example to lead by. He, like many other artists before and after, have one common theme when presenting the female body: nakedness. The fascination with the female form in art often corresponds with the naked body.

When studying the Impressionists, in particular Manet’s Le Dejeuner sur l’Herbe (Luncheon on the grass), an art teacher of mine made us question the difference between nude and naked. While one term suggests consent to the artist’s use of the body, the other implies a sense of vulnerability. For centuries, the ability to depict the naked female form under the veil of exploring the ‘nude’ has allowed artists to cover up their objectification. The patriarchy permits constant exploration of naked females, rarely giving attention to the male form.

The artistic group the Guerrilla Girls drew attention to this in their 1989 art work, Do Women Have To Be Naked To Get Into the Met. Museum? This piece exposed that ‘less than 5% of the artists in the Modern Art Sections are women, but 85% of the nudes are female’. This shows how while the female body has often been the subject of art, women themselves have not been allowed into that sphere – highlighting how women in the art world are there for exploration and objectification only.

This problem is only exaggerated further in representations of women of colour. The female body has been not only the stage for objectification, but often for women of colour it has also been a centre of exoticisation and racism. Their bodies are frequently presented in overtly sexual ways, that feed into or create stereotypes. This is seen in Gauguin’s work. At first glance his paintings may seem to be innocent depictions of his travels, yet the knowledge that these naked girls are as young as thirteen highlights the rhetoric of oversexualisation and objectification of a female form which the artist deemed “exotic”.

While the female body has often been the subject of art, women themselves have not been allowed into that sphere

The focus on the naked female is continued even into more abstract art forms. Picasso, famed for his cubist works, which often distort figures, still managed to emphasise breasts in his paintings. Even through the process of abstraction, the female body is centred around traditionally sexualised areas. This reinforces how it has always been viewed in art: sexually.

More recently, however, artists like Georgia O’Keeffe have transformed representations of the female body in art. Through her portrayal of vaginas as flowers she has replaced the sexual with the natural. The trend of reinterpreting the female form into something more personal is also seen in Frida Kahlo’s self-portraits. These women are creating a new pathway for the depiction of females.

Even through the process of abstraction, the female body is centred around traditionally sexualised areas

This reclamation of the female body is explored further in Indu Harikuma’s project, Identitty. The artist is creating paintings which investigate the personal relationship that various women have with their breasts. Exploring a woman’s own narrative and relationship with her body helps present the female body in a less objectified, more personal and more realistic manner.

This leads us to the question: in recent years has the increase in representation by artists who identify as female resulted in a new depiction of female bodies in art? Looking at artists such as Georgia O’Keefe and Indu Harikuma, the answer seems to be leaning towards a yes.

A reclaiming of the narrative around the female body – one that is less objectifying and more about the relationship with the body – and a representation of the realistic and often taboo anatomy, has begun to emerge. Therefore the female form traditionally seen as a site of sexualisation has evolved into an area for personal exploration.