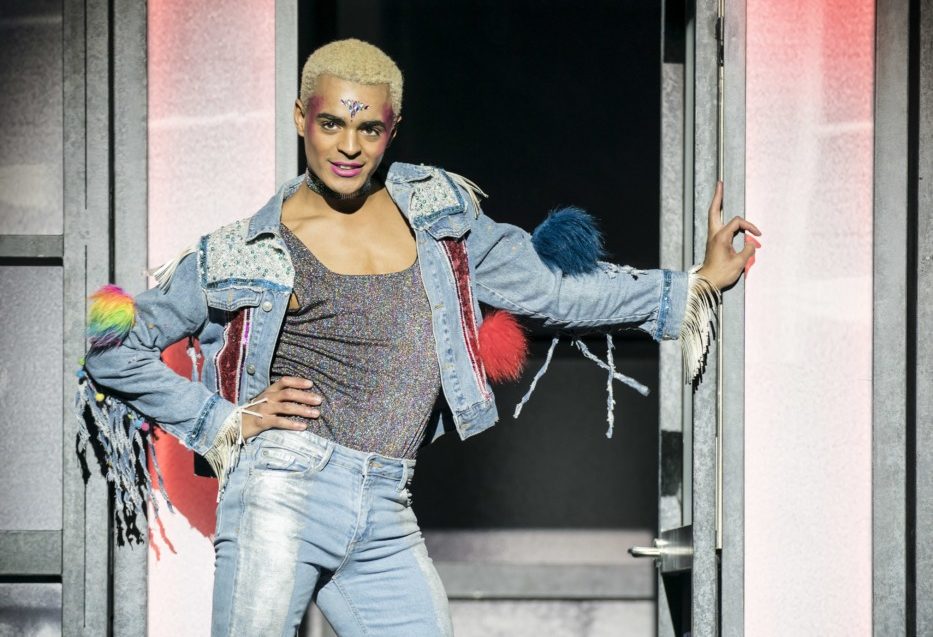 Everybody’s Talking About Jamie is a home-grown, LGBT+-positive, celebration of a musical that has been entertaining West End audiences since 2017. For those who haven’t seen it yet, it takes inspiration from the documentary Jamie: Drag Queen at 16, and tells the story of a schoolboy from Sheffield striving for acceptance as he tries to make it as a drag queen.

The show announced their new “Class of 2019” in January, including the replacement of breakout star John McCrea (Jamie) by Layton Williams, whose CV boasts a turn as Billy Elliot, Seaweed in Hairspray, and recently Angel in Rent (although many will remember him as Stephen in Bad Education). He is, as anybody who has seen his work before will know, absolutely perfect for the role. But he is also a member of the BAME community, which adds an interesting new layer to the show.

A home-grown, LGBT+-positive, celebration of a musical

Everybody’s Talking About Jamie is a musical built on the idea of embracing diversity. Its main themes are acceptance of LGBT+ people and gender non-conformity, but it has also always had a diverse cast. Set in a secondary school in Sheffield, the creators of the show clearly wanted the environment to feel authentic – casting actors with diverse backgrounds from the start. In the actual text of the show, there are two hijabi girls in Jamie’s class. They include Jamie’s best friend Pritti, who addresses her hijab, her family, and her faith several times in the show, without it ever defining her as a character. The idea of a school-set musical is hardly new. In fact, it seems to be having somewhat of a Renaissance – Mean Girls, Heathers, Dear Evan Hansen – but Jamie sets itself apart by creating an aspirational story where hatred can be overcome, even within politically tense times.

Casting outside of traditional race (and often gender) boundaries has been played with in theatre for quite a while. Most notably, Hamilton makes a point about casting America’s founding fathers to reflect America’s current diverse population. Jamie is not a period piece, so in that way it’s even more important, as modern Britain can see a reflection of itself in this modern British musical.

Though Jamie is based on a real person (Jamie Campbell) the creators are clear that this is not supposed to be accurate to real events. Rather, a new Jamie, one moving further away from the original story, encourages the audience to think about the story in different ways, and perhaps inspires other BAME young people to connect with it in ways they might not have before.  As Williams says in an interview with Broadway World, he has been free to bring his own interpretation to the role: “It was not a case of “stand on that dot” etc. to take the place of the previous actor”.

The combination of LGBT+ and BAME identity is often overlooked, so it’s great to see it come through in this casting. On the other hand, unless the script has been amended, it raises interesting questions about how Jamie’s identity is addressed in the show, as the story centres on his gender identity and expression of his sexuality. Does a show presenting a mixed-race, gay character have a responsibility to acknowledge issues surrounding race as well as sexuality, or is it unnecessary as a person should not be defined by their race?

As many people have acknowledged, it’s really important that work like Jamie is seen outside of the London bubble. While the West End run has been extended until January 2020, a tour around the United Kingdom has also been announced for 2020. I’m especially excited that more and more young people are getting to see Jamie (it’s been screened in cinemas twice already) as its message is so important, and it’s a story which is told in such a modern, uncondescending way.

In 2019, Jamie is not about self-acceptance of sexuality – Jamie had already come out as gay long before the start of the show, and is accepted by most of his peers. Rather, Jamie confronts the idea that acceptance – both by yourself and by your community – is still a journey even after that initial step. This is a universal theme, so it is fantastic that the show will soon be seen across the UK and, with a blockbuster film in the works, across the globe!