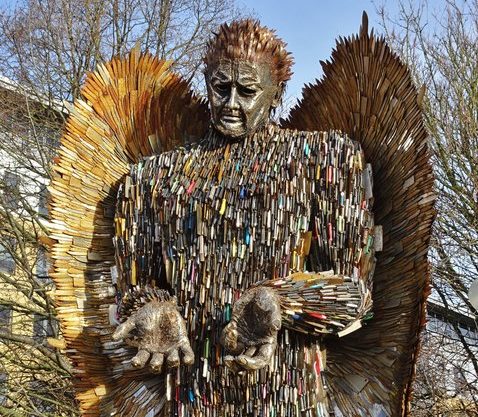 I arrive on the steps of Coventry Cathedral in the remains of daylight to view the Knife Angel in all its glory. As city centre workplaces kick out for the day, people are gathering to stare at this eight metre tall colossus, designed by Alfie Bradley, made from 100,000 weapons seized by the police.

Currently on a tour of the UK, the sculpture has arrived in Coventry from Hull, passing from the former City of Culture to its prospective incumbent.

Intrigued, I move right up to the fencing and peer into the Angel’s hollow eyes. Sorrow moves across its static face, then morphs into grief, then anger, then back through all three. The emotional scope is unending; the sudden rush of grief and dread is unavoidable.

Someone reads aloud from the display board nearby that relatives of those killed in these instances of knife crime were invited to engrave the confiscated blades with messages and names of loved ones. Unfortunately, it’s impossible to see these inscriptions from the fence where I stand. The fact that these private messages remain hidden is somehow more tragic: the voices of the families go unheard, drowned out by the enormity of the crimes committed.

The emotional scope is unending

“This is grim,” says one young man. “Come on, let’s go,” and he walks off with his friends. I can understand his reaction, this is a piece that makes the observer uncomfortable. With hands outstretched, it pleads with passers-by to end the criminal use of the very knives from which it is made. Its head remains bowed, unable to even look the viewer in the eye for grief. It seems as if those hollow eyes were really to meet mine, perhaps the Angel would weep.

Everything in me wants to look away, to avoid the Angel’s gaze and think about anything other than what happened to the knives that got away, were never seized by the police and aren’t in this sculpture. This is an image that draws attention to what isn’t in it, as well as what is. Clearly other people are struggling in the same way: the ubiquitous adult response to this piece is stunned silence. Many people simply walked slowly round the Angel staring and occasionally gasping at the sheer number of blades and artistry with which they’re arranged.

Children, however, don’t seem to experience the same reticence conjured by this piece as adults: “It doesn’t have any feet!” exclaims one little girl, no older than seven. She’s right. I hadn’t even looked to the gravel-bound base of the Angel until she pointed it out. Without feet, it appears to sink into the ground, an effect even more powerful when you realise it’s standing on an ancient burial site. The physical link between knife crime and the grave makes the Angel’s pleading increasingly urgent.

This is an image that draws attention to what isn’t in it, as well as what is

Urgency is the timely message that the Knife Angel has come to bring. Knife crime in the UK was in decline from 2011 to 2014, but has risen sharply since then. Home Office figures reveal 39,818 knife crime offences between September 2017 and September 2018.

Art may seem an odd way to try and combat this terrifying trend. As I contemplated in despair what kind of impact the Knife Angel could possibly have, it was a child again, this time a little boy, who had another enlightening take on this piece: “Now I can tell everyone at school that I’ve seen the Knife Angel!” he beamed, full of the joys of his experience, in stark contrast to everyone around him.

He’s right, of course. As the Knife Angel tours the country, there will be more children who see this incredible work, tell their classmates and share the anti-knife crime message it brings – a new generation of young people willing to take another look at knives and kick them out of our community. That’s the hope behind the grief in this project, and that’s how it will make a difference to the communities it visits.

The Knife Angel is on display at Coventry Cathedral until the end of the Easter period.