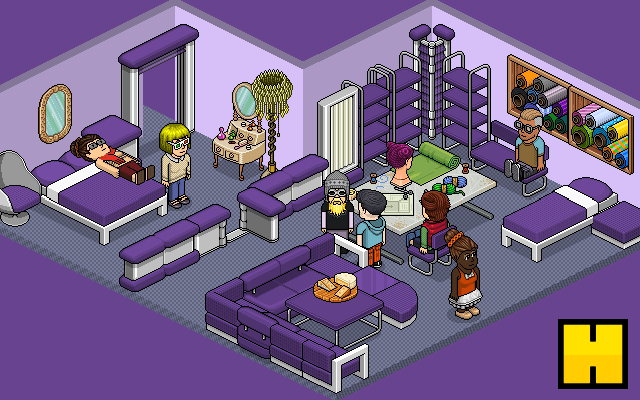 Habbo Hotel, for those unaware, was an online virtual reality game similar to Club Penguin. For much of my childhood, I played via the game – and they were arguably the best years of my life. Habbo Hotel at its prime was the best game ever created.

Trying to explain what made Habbo Hotel so hypnotically brilliant is difficult. On the surface, a website dedicated to virtual humanoid characters buying furniture and dancing in rooms seems a bland idea. However, the ability to communicate with people around the world made the game escapist paradise. Perhaps Habbo Hotel was a cult or a social experiment to see how easy it would be to get a child addicted to the internet. If so, it worked, because I struggled to log out.

For those who want to argue that Club Penguin was the online game of childhood, you’re wrong. Club Penguin certainly had its perks, but unless you were a paying member, there wasn’t a lot of growth. If, like my mum, your parents refused to pay money into a virtual game, you would be a non-member with minimal perks. However, you could earn your membership status if you were smart. The users of Habbo very much controlled the system, for a ‘Noob’ (non-member slang) you could win money by entering costume competitions, or straight up begging people for their rubbish furniture.

The users of Habbo very much controlled the system

Betting rings, begging, and scamming people were a regular occurrence on Habbo. Whether you made your wealth honestly or not, things changed as soon as you scrambled together 20 coins. For a tiny price, you could purchase one month’s membership, and a whole world of opportunity opened up to you. Perhaps it was the same in other games, but ‘Noob’ discrimination was a real issue in Habbo, as soon as you paid membership to unlock new hairstyles and clothes, you ascended the social ranks.

I can still remember the day I earned membership through giveaways, and it was a beautiful moment. As a female character, the iconic half braided hairstyle with a crop top and jeans was a must. As soon as you entered the Habbo Club in your new membership clobber people knew you were a big deal. While in school people didn’t know my name, online I was a BNOH – ‘Big Name On Habbo‘.

Arguably the best aspect of Habbo was the lack of censorship. From what I understand, Club Penguin had security and monitoring – Habbo didn’t. You could say anything you wanted on Habbo, start heated arguments with fellow 12 year-olds using the foulest language possible, and unless another user reported you, nothing would happen. However, this lack of censorship came to an abrupt end. Habbo Hotel was subject to an investigation by Channel 4 due to some users’ overtly sexual and violent language, with supermarkets withdrawing gift cards for the site. Upon reflection, the lack of censorship was probably a bad thing and could be used by some for sinister gains. However, my experience of the game was joyous and despite a few f-bombs, quite wholesome…ish.

As soon as various news outlets reported that Habbo wasn’t very child-friendly, censorship became so extreme the game was no longer enjoyable. Many ‘trigger words’ such as swear words were changed to ‘bobba’, at this point, after three years of playing, I logged off. However, the pre-censorship heyday of Habbo was brilliant virtual anarchy, I still think fondly of xxcuddlebearxx and the riots we started in Habbo Hospital.

Nowadays, I try to understand what the appeal of the game was. Nothing happened, and yet I could easily spend six hours a day absorbed into the pixel world. Perhaps this is more a reflection of my personality as a child, but I’m hoping there are other people out there, of the 10 million active users back in the day, who similarly spent much of their awkward years pretending to be a gang member. Oh Habbo Hotel, you really were the best game around.