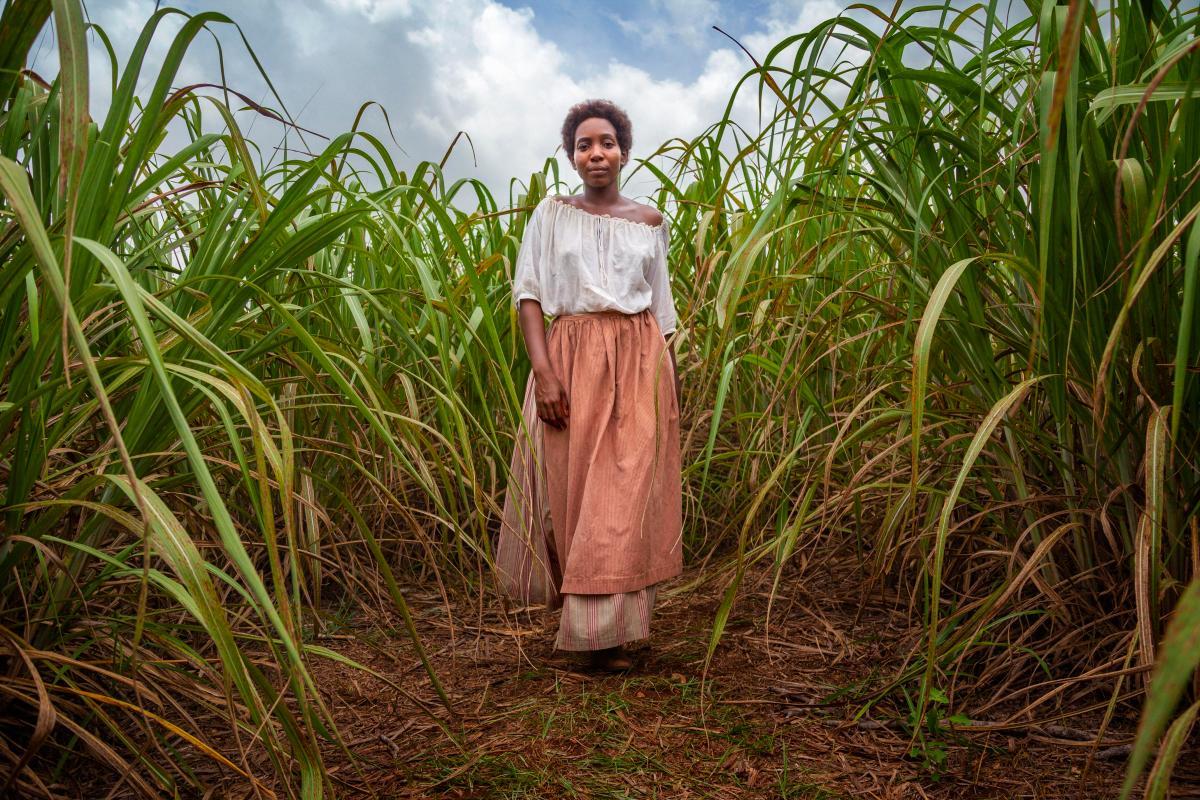 Violence, tragedy and melodrama in BBC’s The Long Song

The BBC’s three part adaptation of Andrea Levy’s The Long Song was a shake-up to the usual cheery Christmas television lineup, and one with a strong political message that made you think. Set in the years immediately before and after the ending of slavery in Jamaica in 1833, The Long Song deals with the harsh reality that in fact, abolition changed very little on the island and its legacy continues to live on with cruel impacts. The British Empire was not over; the enslaved were not truly free and ultimately they were driven into a poverty and dependency that still characterises the region today.

The story centres around July (Tamara Lawrance), a house servant abducted from her mother as a young girl and duly renamed ‘Marguerite’ by her mistress Caroline (Hayley Atwell). The result of the rape of her mother Kitty by the white plantation overseer, July is proud of her status as a “mulatto”. The house servants, including Godfrey, stunningly portrayed by Lenny Henry, come to hear of revolution sweeping across the island and creeping closer to their own plantation, Amity. The lead up to emancipation is violent and uncomfortable. But the violence does not end with freedom – there is three hundred years of entrenched oppression that cannot be overturned by an abolition act. As the drama plays out, we are faced with the stark reality of how the British Empire impoverished the region, whilst the resilience of the enslaved triumphs. In The Long Song, they are not victims, but individuals with the ability and agency to change the status quo. Epitomising the tensions of the time was the ill-fated (and predictable) love triangle at the centre. July and her contemporaries were ruined, but their spirits were not crushed, and her personal happy ending was the only note of hopefulness following the grim ending scenes.

With three parts on three consecutive nights, this mini series was intense and engrossing. The first episode was undoubtedly the best, whilst the second two descend into being shrouded in ever so slightly too much tragic inevitability. Regardless, this is a serious portrayal of slavery. Warwick History’s own Dr Meleisa Ono-George was one of the historical consultants for the adaptation, and it is clear how much research has gone into expertly portraying 1830s Jamaica in a way that is subtle and historically sound.

The casual attitude with which July is taken from her mother, bodies pile up in front of the gallows and women and children are burned out of their homes evokes the true horror of a time when the ability to consider some humans not human at all can warp the mind of all involved. There is no shying away from the ugly truth that enslaved female bodies were used as a battleground of dominance and patriarchy. The tension between the two central women, July and Caroline, was not abnormal for a plantation household. Jealousy and rivalries were rife and no one in this depiction is an angel, no more so than the self-serving July. Caroline and Robert both in their own ways were tormented (and perhaps demented) as a result of the belief that people can be owned. It literally created a monster out of everybody complicit in the system.

Where The Long Song is triumphant is in placing dignity and agency back in a community that has been routinely and historically stripped of it. Though many of the scenes are horrifying and tough to deal with, it is nuanced and never comes over as preachy. White abolitionists are not mentioned and it does not in any way heroise the British Empire. The credit in this series goes almost entirely to enslaved resistance from within. The maintenance of black culture and communal freedom as a form of resistance against all-dominating enslavement is celebrated. The destruction of the old establishment is driven entirely by Amity’s slaves, demanding their rights and finally saying that one word, “three hundred years coming”: No.

Still, for all that The Long Song is refreshing, it also highlights how there is still a long way to go before we can reach true representation in our novels and television. Yes, this is story-driven entertainment, but the series capitalises upon the ‘upstairs-downstairs’, ‘master-slave’ melodramatic trope through its storyline and imagery that BBC viewers will lap up. It’s an effective and palatable way to draw in an audience and illuminate important issues, but surely viewers are ready for something more now? I look forward to the day where a story about slavery can be told without slaves idolising or striving to embody their white owners, where temporary happiness does not come from the love of a white man, and the protagonist is not automatically mixed race and more privileged, educated and ‘enlightened’ than most of her fellow slaves in order to be as appealing as possible. The Long Song is a brilliant and needed mini series that gives voice and respect to anti-colonial resistance worldwide, and one that gives me hope for even bigger and better things in the future.