The problem of the evil artist: ‘The Pillowman’ review

Ever since a good friend of mine convinced me to watch In Bruges when I should probably have been preparing for my A Level exams, I have considered myself a firm fan of Martin McDonagh’s work. As a result, I had some ideas of the type of subject matter I would be encountering once I walked through the doors of the Arts Centre studio. Brutality. Sadism. Macabre humour contrasted with tenderness in the most unusual moments from the most unusual sorts of people. The Pillowman, under the talented leadership of co-directors Matt Owen and Oscar Sadler, manages to deliver on all of this and much more.

Several things immediately stood out to me about the set. There were books, piles of them, situated around a desk on a raised platform, like a library designed by a madman. Some of the piece’s menacing ensemble of dancers – Adam Wilmshurst, Jana Aizupe, Lydia Shaw, Lauren Baulch, Joanna Woznicka, Molly Parker and Stanley Tidbury – were just about visible, crouching on an elevated platform above the stage like spectral spectators, constantly monitoring the action. My taste for McDonagh’s savage theatre was suitably teased by the central image on the stage: a man sitting in what appeared to be some sort of office with a dirty, blood-stained pillow case covering his head. The image instantly took me to dark places, a clear allusion to enhanced interrogation, torture and other grotesque abuses of power by the state. As my friend noted upon taking her seat: “I’m already very scared.”

As my friend noted upon taking her seat: “I’m already very scared”

The figure with his head covered is revealed to be Katurian Katurian Katurian (played by Toby Ghebru), a writer who has been imprisoned by a police force operating in an unspecified totalitarian state after a series of child murders, the exact details of which bear an uncanny resemblance to the deaths of children within his fictional stories. The first scene, an interrogation of Katurian by two imposing police officers, Ariel and Tupolski, played respectively by Hayley Simpson and Teddy Davis, sets a disturbing tone. Throughout the scene, all the actors manage to achieve a perfect balance between tension and humour, a juxtaposition that permeates much of McDonagh’s theatrical and cinematic works. Ghebru as Katurian delivers a suitably restrained performance. The dread he feels towards his imprisonment is palpable in every line. Yet this dread is masked – at least in the beginning – with an air of polite bewilderment towards his interrogators. He insists that he “has never been in trouble with the police” and that there is no politically subversive material to be found within the contents of his stories, declaring that “the first duty of a storyteller is to tell a story”.

Davis leads this initial interrogation as the more than slightly psychopathic detective Tupolski. He performs the role with an air of mocking sarcasm beneath which coils the sinister promise of violence, as noted by his line: “I have to fill out this form in case anything bad happens to you.” Upon the form’s completion, he slowly rips it in two before Katurian’s confused eyes. As for Simpson, I didn’t know whether to burst into mortified laughter or recoil in my seat as she conducted her physical and psychological abuse on the unfortunate author. Simpson’s Ariel was practically bursting with violent energy, her hands trembling as she lit cigarette after cigarette. Both actors worked best when they were bouncing off each other, succeeding in their parody of the clichéd good cop, bad cop routine.

Simpson’s Ariel was practically bursting with violent energy, her hands trembling as she lit cigarette after cigarette

Following the initial interrogation of Katurian, we are introduced to the protagonist’s sister, Michal, which was quite possibly the highlight of the entire play. Marianne Steggall does a marvellous job playing a sympathetic infantile and playful character who, despite inhabiting a world that is professed by Tupolski to be a “totalitarian fucking dictatorship”, is bursting with enthusiasm and love for both her brother and his stories. It was a welcome break from the nightmarish cruelty of the first scene – at least, that was what our directors wanted us to believe. Despite her seeming innocence, there was something about Steggall’s performance that had me on edge, in particular her willing deference to authoritarian figures – “she asked me to scream so I did” – that puts a sinister twist on her childish nature.

This reached its climax when, without thinking, Michal confesses to the murder of the children in the same light-hearted and lilting tone: “I thought I’d hidden it [the body] really well”.  In the ensuing duologue, McDonagh provides a strange pastiche of the old myth that works of fiction are connected to real-life violence. The scene touches upon themes of child experimentation, the relationship between an author and their work, and the moral dilemma of what to do with art created by amoral people. Meanwhile, revelations about Katurian and Michal’s childhood make reality merge with the fictional world of his stories, making Michal’s absurd claim that “I don’t want to hurt anybody, I was just following your stories”, seem almost logical.

One story in particular runs throughout the course of the play, about a magical ‘Pillowman’ who travels around the world, convincing children to end their own lives in an attempt to escape the evils they will inevitably encounter. This story inspires Katurian to commit a horrific crime. Following this scene with Katurian manic and grief-stricken, there was total silence in the studio. Not a single member of the audience dared breathe for fear of disrupting Ghebru and Steggall’s chilling performances.

The dancers provided an intriguing psychological dimension to Katurian’s stories, which avoided reducing them to a collection of lengthy monologues. I felt extremely uncomfortable observing their convulsing limbs and anguished expressions, which contrasted the somewhat gentle music composed and directed by June Ong. Credit is also due the choreographer Elysia Qiu, and both the flight choreographers George Chopping and Joshua Folley. One minor problem I had with this artistic decision was occasionally having to strain to listen to Katurian’s words, which often foreshadowed major developments in the plot, due to the volume of the music.

Despite this small technical issue, I think it is safe to say that I thoroughly enjoyed The Pillowman, although I will probably be having bad dreams for the next few weeks. It is a play that ponders the question of the relationship between artists, their works and their audience. The play’s weighty themes were handled with expertise by Matt Owen and Oscar Sadler, who should be giving themselves a hearty pat on the back. The same goes for all the performers involved who conveyed these troubling themes in a way that was humorous, uncomfortable and awe-inspiring. Congratulations are all I have to offer.

The Pillowman is at the Warwick Arts Centre until Saturday 16 February. Tickets are available here. 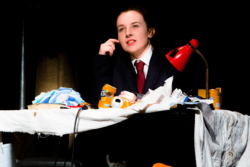 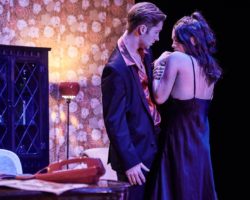