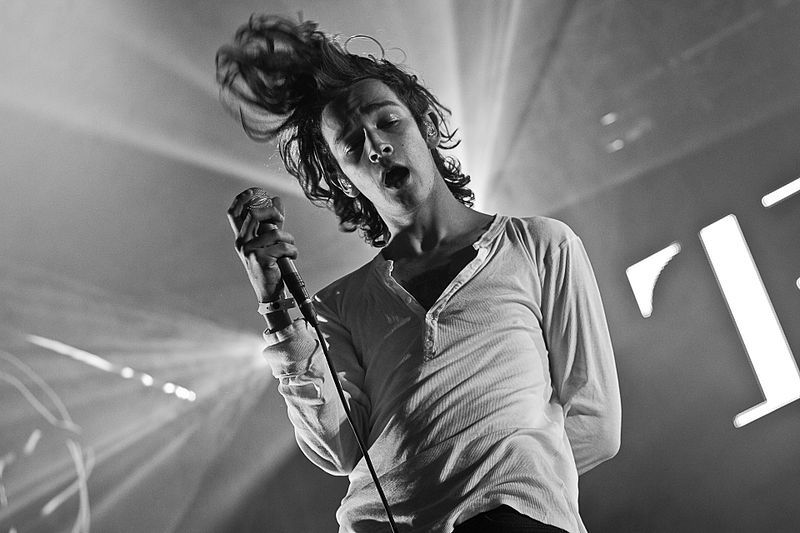 The 1975 have finished the UK leg of their world tour and there was so much to take in at this show. Not only was it bigger and brighter than ever before, but it contained more easter eggs to the band’s career than a Marvel film. The show promotes their latest album: A Brief Inquiry into Online Relationships. The dual nature of this album is reflected throughout the live show; both a commentary on humanity’s relationship with modern technology and social media and a highly introspective account of frontman Matthew “Matty” Healy’s experiences with drugs and rehabilitation.

The show is both an otherworldly experience – with The 1975 playing the role of messengers, similar to Ziggy Stardust and the Spiders from Mars – as well as a very intimate, personal gig, despite the enormity of the arena. This tour has been a kaleidoscopic light show, and ‘Music For Cars’ (the name the band gives to this era of their music) would seem a rather modest term. Once again, the band has collaborated with award-winning visual designer Tobias Rylander to dazzling effect.

The set kicks off with ‘The 1975’ and the familiar roar of the crowd as the lights dim. ‘Give Yourself a Try’ and ‘TOOTIMETOOTIMETOOTIME’ together make for the most energetic opening. TOOTIME might just be a frivolous pop song compared to the rest of the new album, but nobody complains. ‘Sincerity is Scary’ is like stepping inside the music video. Using a treadmill inspired by Jamiroquai’s ‘Virtual Insanity’, they recreate the masterful “single shot” technique of their video. ‘It’s Not Living (If It’s Not With You)’ integrates elements of that video and, in keeping with the album cover, the screens look like neon-Tetris.

Healy at no point requests the audience to put away their phones; his personal philosophy has altered and this clearly translates to the performance

Old songs and the band’s iconic box logo take on new meanings in this show. ‘The Ballad of Me and My Brain’ is a stand-out
song among their older repertoire. The box, displayed on the rear 50-foot screen, resembles the outer edge of an iPhone and as such is fitting for the theme of their latest album. Imaginatively translating music to the stage, Healy is elevated on a scissor-lift to stand in the centre of this screen, as though trapped.

The band continues to shift between eras, performing both new songs and classics seamlessly. The songs are interspersed with short Michael Jacksonesque dance set-pieces; the Jaiy Twins deserve credit as the unsung heroes of this show, dancing tirelessly and in sync throughout. The set turns pink for ‘A Change of Heart’ and three massive suspended cubes become the focus; one slowly descends so that by the end the Healy rests on it. Reminiscent of the monolith scene on the moon from 2001: A Space Odyssey, it again showed the newfound transcendence of this show.

The anthemic ‘Robbers’ illustrates the more personal side of this gig. Healy tells the audience, “this will always be your song” and,
soon after, a couple are engaged – just like in the London O2 show in 2016 – and serenaded during ‘Falling for You’. It is interesting that, given the themes of the latest album, Healy at no point requests the audience to put away their phones (a common trope of their previous shows); his personal philosophy has altered and this clearly translates to the performance. It’s also worth noting that despite the theatricality of the whole show, Healy ditches his gothic pied-piper look for much more functional apparel: a knitted sweater, tank top and trainers. The show neatly straddles both the spectacular and the unpretentious elements of the show.

During ‘I Like America’, the music video is projected onto the colossal screens – a sort of animated décollage accompanied by song lyrics

During ‘I Like America’, the music video is projected onto the colossal screens – a sort of animated décollage accompanied by
the lyrics of the song. This then transforms into a pink stage centred around an infinity mirror effect. The popular track ‘Girls’ comes in at just the right time to get everyone dancing only to be sobered by the final track, ‘I Always Wanna Die (Sometimes)’, another deconstructed and intimate moment. The frontman is on the acoustic, and steps away from the mic – it’s one of the stand-out moments of the tour for both Healy and the fans.

The encore is as strong as ever. In true 1975 tradition, they end with ‘Sex’ and, as always, the audience wants more when the house lights come up. If you had been following the coverage of the UK tour on social media, then there probably aren’t many surprises. However, experiencing this truly overwhelming performance first-hand cannot be overstated. The setlist was well-balanced, the band maintained high octane energy throughout and it was great to see Healy on top form.

By all accounts, The 1975 are only going to get bigger and brighter. The band are headlining Reading and Leeds this summer, their upcoming fourth album Notes on a Conditional Form is set to be released even before that. 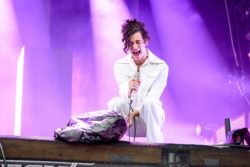