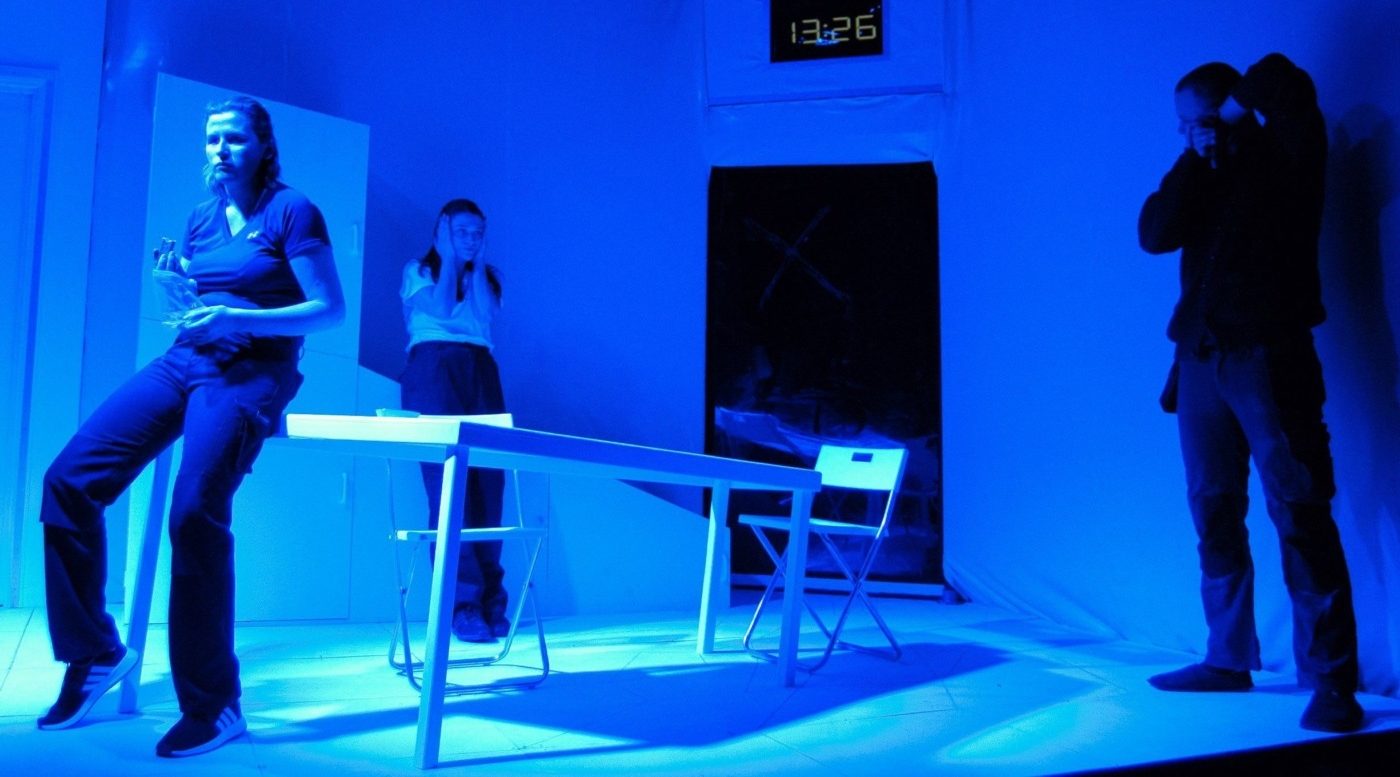 As I stepped into the dark confines of the studio I found myself greeted by a stark white cage of plastic and steel. This was to be the set of X, by Alistair McDowall: a black box inside a black void. I was immediately on edge. This sensation of uneasiness only continued to grow as the cast seeped into view, their backs turned to the audience. Like anonymous black shades, they emerged and tore down the plastic sheets of the cage in one fluid motion, exposing the sterile white set behind. The show was about to start.

X provides the audience with a bleak dystopian vision of humanity’s future. Set on a futuristic research base on Pluto at some indeterminate point in the near future, the plot follows a small collection of scientists who find themselves suddenly cut off from all forms of contact with Earth. With their technology malfunctioning, this small sliver of humanity finds itself descending into denial, despair and, ultimately, madness. Or at least, that is one way to perceive this incredibly complex and nuanced piece of theatre. A piece of theatre so masterfully performed, so skilfully directed by Joe Matty and Josh Stride and, of course, brilliantly written by the mad McDowall machine himself.

This small sliver of humanity finds itself descending into denial, despair and, ultimately, madness

What I enjoyed so much about this production is that instead of being presented to the audience as a preachy piece about the dangers of climate change and man-made ecological disasters, a message about the environment was not at the forefront of this drama. The apocalyptic vision of Earth conjured up by Luke Mott’s nihilistic and tragic portrayal of the captain, Ray, and the colourless and slightly warped set design of the base, came together to provide the framework for the crew’s psychological and spiritual evisceration by the wretchedness and the indignity of their isolation.

When Ray recounts a story from his childhood to the seemingly sardonic though ultimately caring Clark, played with much vitality and variation by Charlie Coombes Roberts, the audience understands the environmental significance of Ray’s description of the death of all birds back on Earth: “They’re all just lying in the street like stones. The trees stopped singing, then breathing . . . no colour left, no light”. Yet this passage goes far beyond an opportunity for the writer to wag his finger at the audience and remind them of the importance of recycling. This fraction of dialogue perfectly evokes the underlying despair that runs through Ray’s character and the narrative of the play itself. By the end of this production there is little light left to speak of.

All that our motley crew of cynical scientists and quick-witted mechanics are capable of doing in order to stave off the encroaching disaster is bickering and reminiscing. The most prominent scenes of conflict within the first half of the play are derived from the attempts of the assistant captain Gilda, whose challenging role is dutifully undertaken by Amelia Moore, to maintain a semblance of order within the base. I truly felt the emotional struggle of this overburdened character thanks to Moore’s performance. Struggling with her own loneliness, the disrespect of her colleagues, and dwindling belief in her own rescue, all Gilda can do is scrape hollow, futile victories from the corrosive ocean of nihilism that seems to engulf the colourless base: “The wall’s clean now, you got that done”. The conflict is particularly acute when Gilda faces off with the base’s competent, brusque but compassionate engineer, Mattie, played by Nicole De Barra with an appropriate defiance beneath which lurks a loving nature. Mattie responds to the accusations of spite from Gilda by highlighting the self-imposed isolation that Gilda had brought upon herself – “You never tell anyone what you’re into” – before offering her boss some rather interesting advice on how to structure her day, whilst bonding over the recorded “organic” silence of the desolate Pluto. All the while, Gilda is haunted by the ominous spectre of a malformed female child which seems to have crawled out of one of Ray’s stories, a ghostly figure played eerily well by Lucy Chamberlain.

The lighting of the piece suited its bleak tone, throwing its cast under dehumanising cold shades of blue and grey and white

As I left the Arts Centre I found myself continually re-examining such moments. In the second act of the play, following the realisation that their clocks are defective, time itself becomes a malleable illusion for the characters. Identities are forgotten. Stories are exchanged at such a rapid pace it become impossible to recall their first teller. Entire characters are put into question and the audience is forced to wonder whether entire scenes have been merely the delusions of the crew. One moment that left me mesmerised was the breakdown of the socially inept Cole. In a single scene, Cole’s entire identity comes into question and his memory begins to fail. He repeats lines and a specific movement, looping round and around the stage as he accuses Gilda of “putting our sanity at risk”. This utter disintegration of a normally emotionally repressed individual was harrowing to watch, not least due to the performance of Niall McDaid. Whatever was going on in the rehearsals when Joe Matty and Josh Stride gave him such directions, I do not want to know.

The lighting of the piece suited its bleak tone, throwing its cast under dehumanising cold shades of blue and grey and white. Scene transitions, often accompanied by a reverberating synthetic hum or, more bizarrely, a chirping bird, further demonstrated the anxiety of the crew. The periods in between scenes often depicted the characters nervously eating, fidgeting, fiddling with toys and staring without restraint at their colleagues. Overall these transitions were brief, smooth and more than a tad uncomfortable. Which, I think, summarises the general impressions X left on me. I would recommend seeing this show while tickets are still available, though perhaps not if you have a nervous disposition!