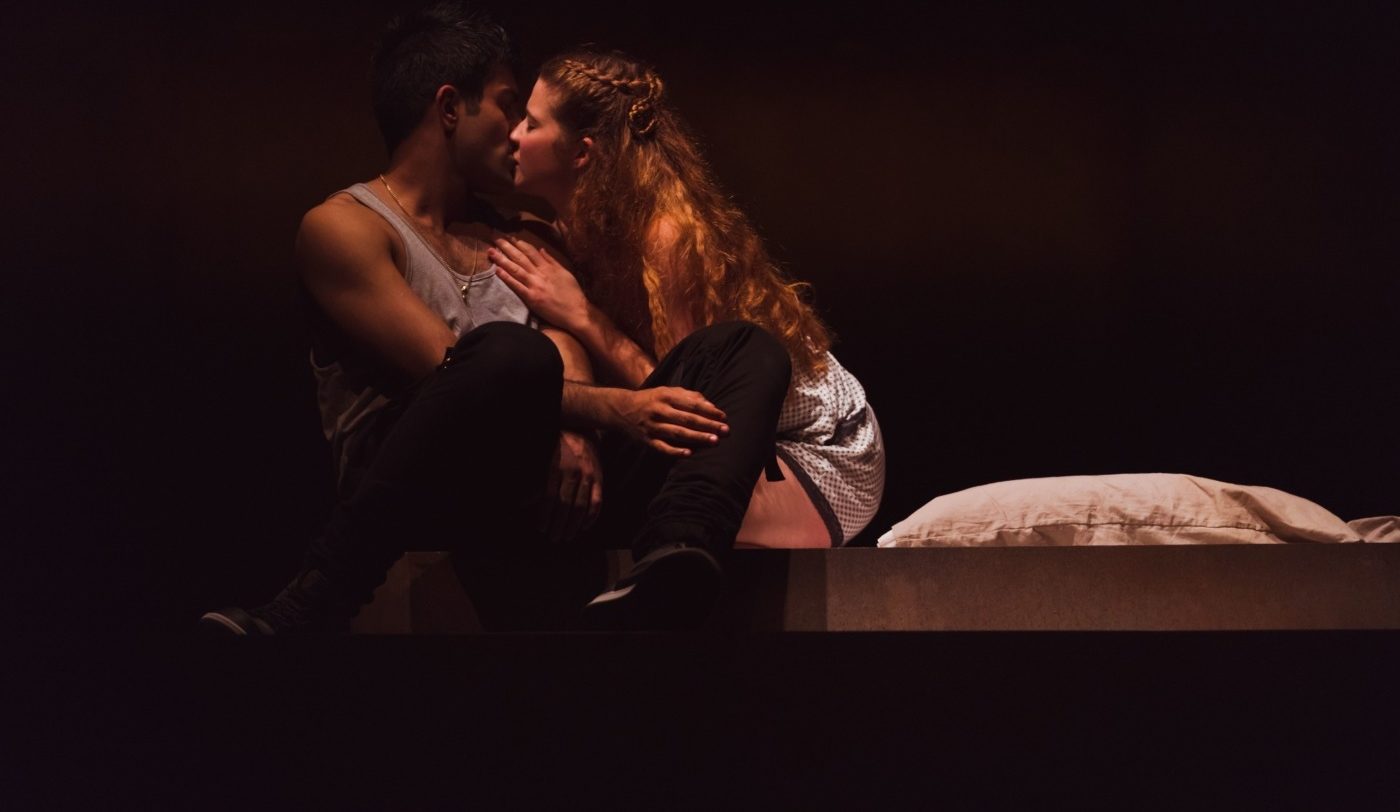 Romeo and Juliet has a pretty questionable reputation. Perhaps this is because people find unbelievable the love story of two kids killing themselves for each other, or it’s the classic story that reading something for GCSE has sucked the joy out of literature.

I did not read the play for myself until I was in my twenties. Revisiting the original text changed my perceptions, and pushed it into the list of my favourite Shakespeare plays.

In the first 14 lines we are told the ending. So this play isn’t really about whether or not the lovers get their happy ending (spoiler: they don’t). Instead, the play’s themes take centre stage – amongst them, generational conflict, civil violence, and patriarchy.

It is in the exploration of these themes that Erica Whyman’s RSC production shifts our perspective on this play.

Whyman’s production is staged in modern dress, and locates the Montague-Capulet brawling within the context of modern-day knife crime. The focal point of the set, an open square structure in the middle of the stage, transitions seamlessly from Juliet’s balcony, to Friar Lawrence’s cell, to marriage bed, to tomb.

The production is modern, sexy, diverse, and does a wonderful job at finding the humour amidst the tragedy. Ishia Bennison, as Nurse, is a scene-stealer, and evokes the warmth and love of an Italian nonna (although this production is quite firmly set in a British context).

The production casts Charlotte Josephine as Mercutio, flipping the gender of the character. Although the gender swap worked nicely in the production’s diverse and modern setting, her erratic and very physical portrayal of Mercutio was lacking in variation.

The real crowing success of this production is the electric relationship between Bally Gill as Romeo and Karen Fishwick as Juliet. His boyish charm will have any girl wishing she were his Juliet (in a similar way to how I’m sure we all feel about the young Leo DiCaprio in the Baz Luhrmann film). Their sexy chemistry evokes all the intensity and irrational feelings of first love, convincing me of Romeo and Juliet’s romance for the first time in any production I’ve seen.

Fishwick brings a beautiful mixture of girlishness (let’s not forget Juliet is just 13) and feisty defiance. She does justice to Juliet’s courageousness, portraying a young woman who would rather die than be forced into a marriage she does not want. I concede it is problematic that her autonomy takes its form in suicide, but nonetheless Fishwick’s Juliet has agency and actively defies her patriarchal father. We might identify and sympathise with her as we do with Ibsen’s Hedda Gabler. Both women see death as the only way out of patriarchy.

In fact, one of the most powerful scenes of the production is when, insisting she marry Paris, Capulet shouts in Juliet’s face as she cowers on the floor before physically throwing her across the stage. Michael Hodgson is fantastic as Capulet, a volatile man who oscillates, within a matter of lines, between loving father and domestic abuser. The Nurse, Lady Capulet, and Juliet are left powerless in the face of his verbal and physical abuse and rage.

By locating the generational conflict within a moment of domestic violence, Juliet’s continued defiance and deception of her father is explicitly shown as a moment of agency and courage. This challenges a performance history of Juliet that sees her as a fragile, innocent girl. Fishwick and the production will help a modern audience to reconsider Juliet as Shakespearean woman we can identify with and admire in her fiery moments.

Whyman has managed to produce an exciting and modern production which will have viewers leaving the theatre thinking differently about the play. It is both early modern tragedy, and a play that resonates with our time. Whyman shows us that conflict between parents and children, falling in love for the first time, youth violence and knife crime are timeless issues, and that this Shakespeare play can indeed be staged in new and thought-provoking ways.

Romeo and Juliet is on tour across the UK until 23 March 2019. You can buy tickets here.