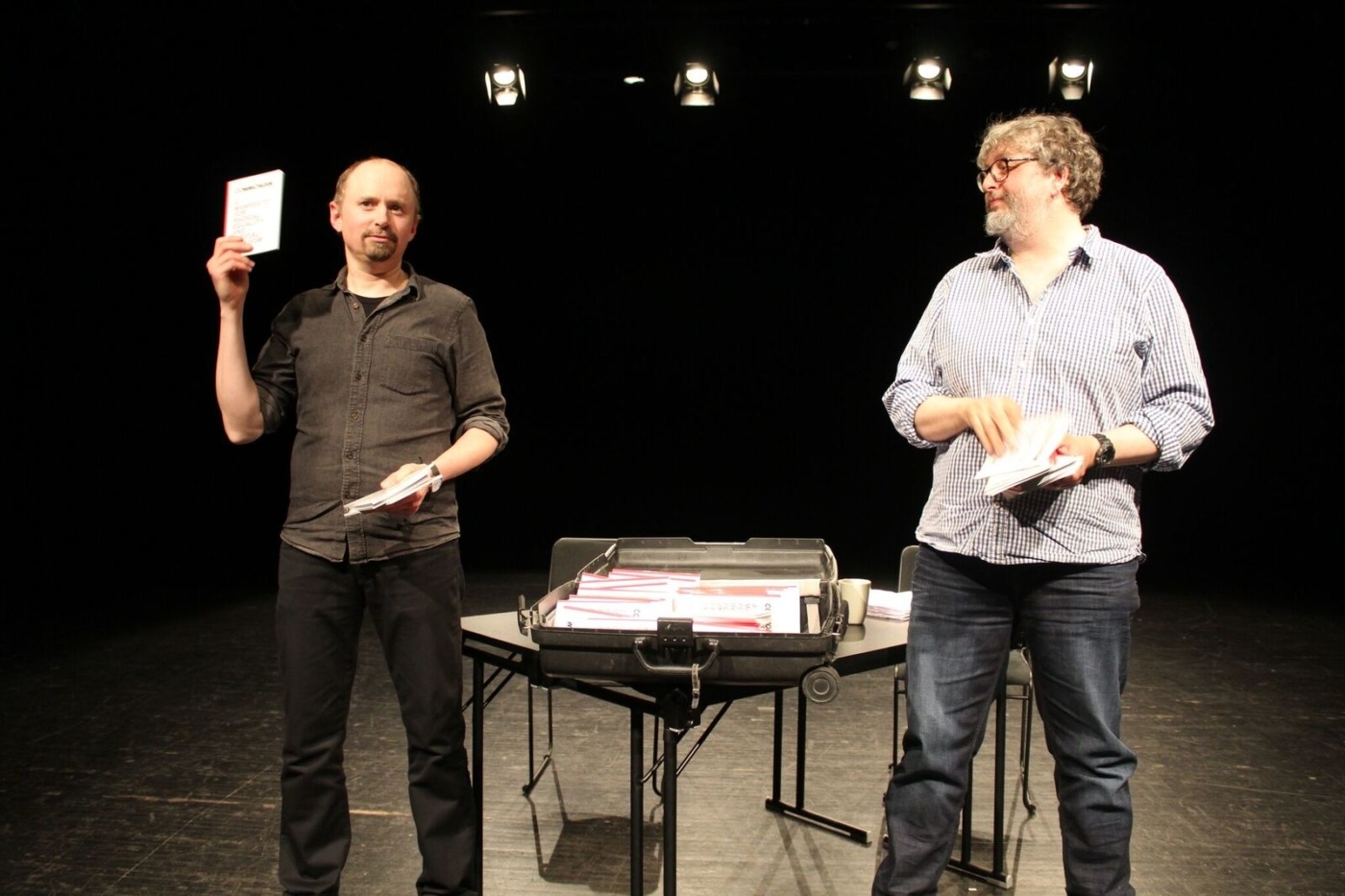 Commonism is a work of socially conscious theatre on the matters of globalisation, neoliberalism and democracy. Performed by award-winning theatremakers Andy Smith and Amund Sjølie Sveen, it takes a bare bones approach, revolving around a performed conversation between the two men at a table in the centre of the stage, in which they grapple with some of the biggest political questions of today. The performance I saw was the last in Britain of the work, which previously ran in Sjølie Sveen’s home country of Norway.

Smith and Sjølie Sveen perform both as friends and colleagues, resulting in the blurring of the lines between fiction and reality. While both are clearly left-leaning, they don’t agree on everything. Smith — who is also a lecturer at the University of Manchester —  takes the role of the optimist, keen to relinquish his privilege as a well-off white man in exchange for a system that is fairer for everyone. Sveen, however, comes across as more of a devil’s advocate, supporting Brexit and appearing cynical about feminism. Nonetheless, the two men are united by the ideology of ‘commonism’ that they advance over the course of the hour. They argue that we need a more connected society, a need for the community that has been eroded by neoliberal capitalism. It’s notable that the cultural-economic system of neoliberalism is identified as the problem here, when too often, the wishy-washy language of ‘inequality’ is used by otherwise astute political commentators. The men have done their reading, and it shows.

A work of socially conscious theatre on the matters of globalisation, neoliberalism and democracy

Another aspect of Commonism that sets it apart from other works of its ilk is that it is characterised by a level of self-awareness that is all too rare at events like this, which, as Smith and Sjølie Sveen acknowledge, tend to be populated by white, middle class, Guardian reader types who can afford to go to the theatre. There is often a smug, elitist attitude to politics among this group that is deeply off-putting to anyone who doesn’t fit their narrow demographic, but Commonism seems more interested in improving the world we live in than in being right and pulling apart detractors. The combination of Norwegian and British perspectives that is presented also brings a refreshing contrast to the nativism that too often permeates political discussions in Britain.

At the end of the set, copies of Commonism – a 2018 spin on the Communist Manifesto – are handed out to the crowd. Written in both English and Norwegian, it outlines seven principles, from the more abstract, such as ‘radical equality’, to the more concrete, among which are universal basic income, a policy which has been piloted in Finland. While the allusion to Marx and Engels is light-hearted, the contents of the book are serious and thought-provoking. I think Smith and Sjølie Sveen anticipate how easy it will be for us to go home and forget about the performance, and giving us something physical to look back upon will undoubtedly make that harder to do.

For me, and indeed perhaps the majority of the audience, there is admittedly not much that is new in Commonism. Before attending the performance, I was already a supporter of Universal Basic Income, and believed that extreme wealth shouldn’t exist. But preaching to the choir has its merits; I left the theatre feeling inspired, in a world where it’s easy to feel pessimistic and disillusioned, and the discussion of ‘limitarianism’ in particular leads to interesting debate with friends about whether a hard limit should be imposed on the amount of wealth any given individual can accrue.

Overall, Commonism is a refreshingly self-aware, pleasingly simple work of political theatre that doesn’t outstay its welcome. It may not create a movement, but it’s certainly a conversation starter.