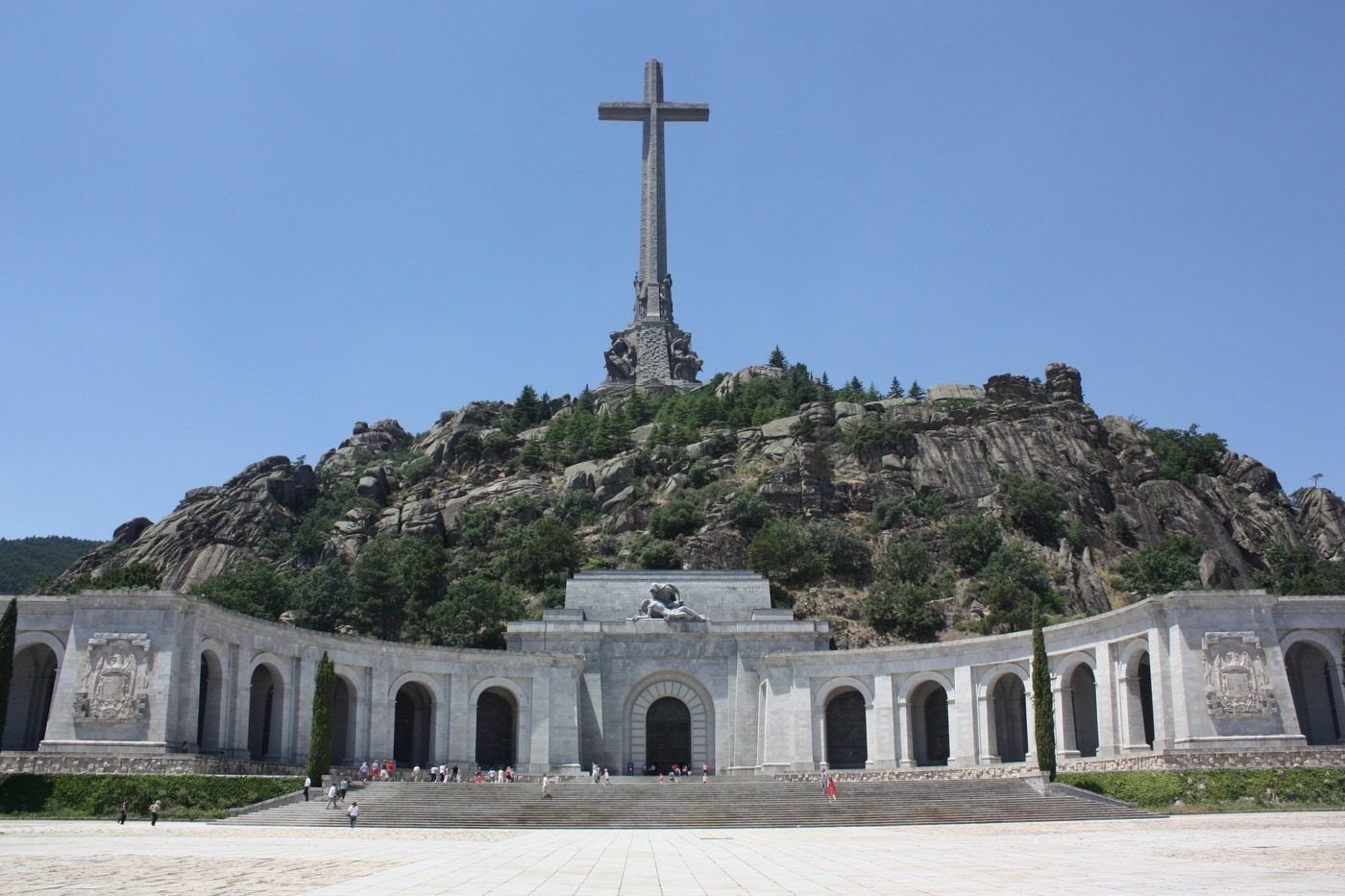 The Valley of the Fallen, one of the most visited national monuments in Spain, remains a powerful symbol of the 1936-1939 Civil War. In the state-funded mausoleum, situated on the outskirts of Madrid, lie the remains of 40,000 victims from both sides of the conflict. But for the past 40 years, the site has taken on a new meaning. Alongside the casualties rests General Francisco Franco, who led Spain’s fascist regime for 39 years after the war until his death in 1975.

Franco rose to power after playing a major role in the revolt that was launched in 1936 and ended in victory three years later for the insurgents. He went on to lead Spain under a military dictatorship for nearly four decades. Franco’s body, which has presided in the Valle de los Caidos since his death, has been at the centre of a broad national debate. The monument, which he commissioned to be built in 1940 as “a national act of atonement”, commemorates the fallen of the Spanish Civil War. Yet many have criticised its presence as being a symbol of fascism. In September, this fiercely contested topic entered a new phase following the passing of a decree by Spain’s socialist government to move ahead with plans to exhume the late fascist leader, ‘El Caudillo’.

Having been in power since June, Spain’s Prime Minister, Pedro Sánchez, stated that one of his government’s main aims was to secure the removal of Franco’s body from the monument as a way of moving beyond the nation’s painful history. But this is not an isolated political opinion, other parties such as the leftwing Podemos and the Catalan nationalist parties agree with the Prime Minister. Sanchez commented that “a country that looks to its future needs to be at peace with its past”. In contrast, the leading conservative opposition party believes the decision is, in fact, an attempt to gain voter support. The Spanish government will allocate the final resting place in the event that Franco’s family do not issue their preference for where his remains should go. Reports have suggested the family want him to be laid to rest in Almudena Cathedral in the centre of Madrid, despite them publically disagreeing with the decision to exhume his body, calling it a “cowardly and vengeful decision”.

The government is trying to rewrite history…Although many disagree with Franco, he did get Spain out of misery

While the exhumation is said to take place in a discreet manner in order to avoid public protests, the political fervour surrounding this issue is very much alive, in the same way that Franco’s legacy has stuck with Spain. Among Spaniards, the contested issue is reflected by some believing that Franco’s body should be left intact in the monumental mausoleum he designed for himself. On the other hand, others insist it’s an abomination to have a dictator honoured and paid homage to. 37-year-old Spaniard Francisco Muñoz commented: “if you compare this to the case of Germany, it is practically illegal to support Hitler.”

Meanwhile Juan Hurtado, 84, who lived through the Civil War, looks up to the imposing grey cross which towers 150 metres over the basilica and calls it a “wonder of the world”. He believes that Franco’s remains should be left alone and that he should continue to be honoured. “The government is trying to rewrite history. Although many disagree with Franco, he did get Spain out of misery,” he says, shaking his head. His 19-year-old grandson, Carlos, rolls his eyes in response to his grandfather’s comments, indicating the generational differences on this issue.

After Franco’s death, Spain shifted into a democracy. The importance of this political change has been contemplated by the president of the Francisco Franco Foundation, Juan Chicharro, who said that opposing Franco’s exhumation isn’t necessarily defending the 40-year-long leader, but rather what he represented, which in Chicharro’s words was “a respectable and united Spain with religious foundations focused on the wellbeing of the people”.

Others also disagree with the decision to exhume Franco. While leaving the daily 11 am service which takes place in the basilica, Dolores Quintero, 46, explained that her Catholic religious faith leads her to believe that any form of exhumation is barbaric and that the dead should be left in peace, regardless of who they are. “If people want to bring their children here and tell them that Franco was a monster, they have the right to do so. Instead, I choose to come here and pray for him and for the victims of the war,” she said. “Leave the dead out of it.”

However, most Spaniards support the decision to disinter Franco’s body, according to a study conducted by the Center for Sociological Research (CIS). Many say they oppose his resting place as it was built under slave labour from the opponents of the regime as well as the fact that, lying alongside him, are the unidentified corpses of the war’s victims. “Someone who has violated human rights should not be commemorated publicly,” says Rosana Alija Fernández, an International Relations professor at the University of Barcelona. “The Valley of the Fallen symbolizes the atrocities committed under Franco’s regime and how they have not been recognised.”

The Valley of the Fallen has affected people’s lives in unimaginable ways. Nicolás Sánchez-Albornoz, a 92-year-old historian, was sent to the monument in March 1948 to carry out a six-year sentence having been deemed guilty of spreading propaganda against the Franco regime around Madrid’s Central University. For him, the site stands as a painful reminder of Spain’s fascist past as “People say there are fighters from both sides buried there, but that’s not true.” He went on to explain how: “There are fighters from an army that rose up – and there are people who were shot, who were victims. They were victims. It’s a fiction that they wanted it to be a Valley of the Fallen.”

Here at Warwick University, one Spanish student, Lucia Sevillano, believes that the national monument does not take all the victims into account. “Because the civil war didn’t happen that long ago many of those affected are still alive today and therefore are still fighting for their beliefs.” Lucia also explained she felt generations were being divided as a result of ideologies being “passed down through families”.

Professor Juan Méndez, who teaches human rights law at the Washington College of Law supports the government’s decision. “I feel encouraged by Sánchez’s announcements, as they promote reconciliation and democratisation in Spain.” Sánchez’s plans to move Franco’s remains are unclear due to the complex combination of religious and political differences. Professor Mendez said that Spain could look to how former Chilean dictator Augusto Pinochet and Italian monocrat, Benito Mussolini were buried, as their resting places are not subsidised by the government and have not been commemorated publicly. What makes Franco’s circumstances so particular, Professor Mendez said, is that he passed away while he was in power and a slow transition into democracy followed. In order to achieve this, all parties agreed to a “pact of silence” in 1975, making the crimes committed under the civil war an unspoken subject. “There were other issues to be dealt with at the time, so Franco’s legacy was left to one side.” Regardless, he believes that plans to exhume Franco should move forward.

What seems universal, however, is that many are seeking closure to this decades-long debate, with 37-year-old Francisco arguing that “From a moral perspective, I think [Franco’s] body should be exhumed because no dictator should have been buried with honours in the first place”. Regardless of personal opinion on the topic, he stresses that the planned exhumation should not be turned into a political victory for the new government.

In December 2018, Spain’s Supreme Court rejected the wishes of Franco’s family to momentarily halt the exhumation process as legal issues were ongoing. This followed the Spanish government’s decision not to allow La Almudena cathedral to be the new resting place for Franco, citing reasons that include public order and the risk of terrorist threats.

Yet 43 years after the dictator’s death, the exhumation of General Francisco Franco’s body remains an issue dividing Spaniards. But perhaps after the planned exhumation has gone ahead, Spain can finally unite in confronting the horrors of Franco’s regime and the country’s troubled past.