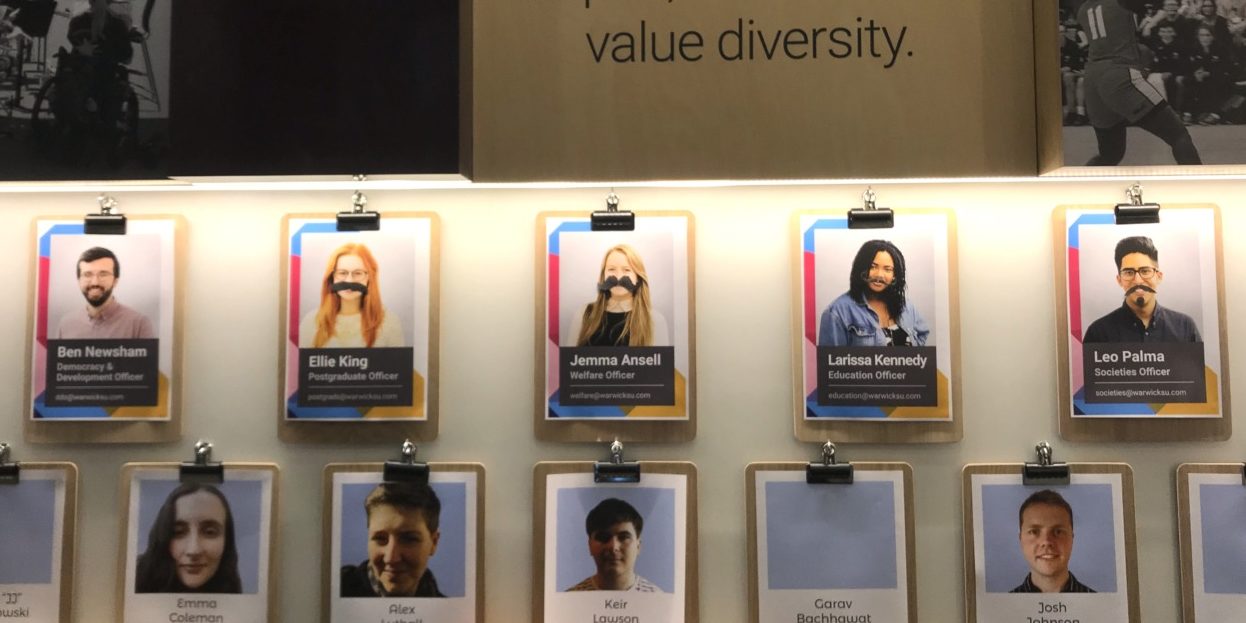 Students at the University of Warwick raised £11,459 for Movember this year as of the afternoon of Monday 3 December, exceeding the £3,000 target by more than £8,000. 193 members and 21 societies on campus took part in the fundraising.

During November, men around the world are encouraged to grow out their moustaches and to have friends and family sponsor them in support of the Movember Foundation.

Fundraisers can also do their part hosting events, or by walking or running 60 kilometres throughout November, to represent the number of men lost to suicide every hour.

She was in charge of the whole of the University’s campaign, which raised approximately £1500 more than last year.

A myriad of sports clubs at Warwick joined to fundraise for this cause, such as WarwickSnow, Warwick University Fencing Club, and University of Warwick Table Tennis Club.

University of Warwick Men’s Cricket followed with £1,695. Warwick Chemistry Society (ChemSoc) was the only non-sport society which participated this year, and raised £980, coming in fourth place.

The individual who raised the most money for Warwick’s Movember 2018 was Alex Rajakanthan, with a sum of £530. Speaking to The Boar, he shared: “I’ve been doing Movember for four years now and think it is a great way to raise money for causes which don’t get talked about enough.

“Numerous members of my family and friends have been affected by mental health problems and I think showcasing these issues to the public will help raise awareness – even just by growing some ugly facial hair.”

In second place was Tom Kew, raising £414. Sohayl Ujoodia took third place with £320. He told The Boar: “I’ve been fortunate enough not to have lost a close male family member or friend through cancer or depression, but wanted to make a little difference to those battling with these issues.

“Initially it was a bit weird seeing myself with a slightly alarming slug on my top lip because I’m normally clean shaven, but once I got used to it, it was quite fun comparing the tache with the rest of the cricket team and seeing how bushy it would get by the end of the month.”

To encourage people to donate, he sent “disturbing selfies” – as mentioned on his fundraising page – to his friends of his half-grown moustache.

His favourite part of the month was during a Week 7 Pop! circle, where the theme was music videos. He went as Vennu Mallesh from viral YouTube video ‘It’s My Life’.

In addition to individual efforts, a variety of fundraising events were also held in support of Movember. The annual Movember Dodgeball Tournament took place on 15 November in York Hall in London.

The teams competed to win the “coveted dodgeball crown and epic prizes”. Prices were a £250 donation for a team of up to 10 players and £10 for spectators. As well as the dodgeball tournament, there was also a DJ, a “sausage sizzler” and a fully licensed bar.

On 30 November, at the end of Movember, RAG held a “Tash Dash Bar Crawl Hunt” after a month-long fundraising campaign.

A treasure hunt also formed part of the bar crawl, where people were split into teams and given clues about which was the next bar to go to by a member of the RAG committee.

The rumours are very much true: if we manage to raise £15,000 by the end of the month, I’ll get a TATTOO [sic] of a moustache on my body!

Outside of Warwick, the University has also been receiving donations. iBrowBar in Coventry promised to donate £150 to Warwick, if 40 customers from the University visits the salon by Christmas to have their eyebrows refined. They will also receive a 10% discount.

Balraj Dhingra, Sports Officer for Warwick’s Students’ Union (SU), has been actively supporting Movember, for example by sticking moustaches on the Sabbatical Officers’ portraits at the SU headquarters.

Halfway through the month, he declared on Facebook: “The rumours are very much true: if we manage to raise £15,000 by the end of the month, I’ll get a TATTOO [sic] of a moustache on my body!”

Warwick came in ninth place for the foundation’s Big Moustache on Campus challenge, which has raised £441,105, by 20 universities. The University of Exeter came first with an amount of £40,076.

The individual who raised the most money for this challenge was Louis Carr, from the University College London Men’s Football Club, with a sum of £11,344.

He took his own life this November, after struggling with anxiety and depression in the past few years. Students of all universities were encouraged to donate to his page to honour him and his legacy.