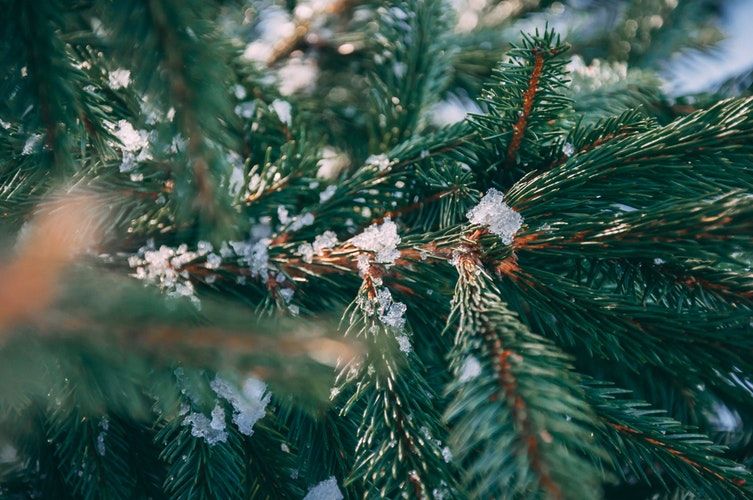 The chemis-tree of Christmas trees

Christmas trees are an iconic symbol of the festive period. First introduced to Britain in the Victorian era by Prince Albert, our favourite festive decorations were originally a German tradition, though no British Christmas today would be complete without one. Unlike other trees,  the leaves of a Christmas tree stay green throughout the winter (unless the tree is felled), despite them typically living through very cold and snowy winters for years.

It is estimated that around 7 million Christmas trees are purchased in the UK every single year. Christmas trees are usually one of three types: Spruce, Fir, or Pine, all which are evergreen conifers, with 80% of trees sold being Nordmann Fir. Evergreen trees, as the name suggests, keep their leaves throughout the winter, rather than shedding them as deciduous trees do come autumn. Leaves tend to be generally fragile, and can be easily damaged by cold weather, as the water inside them freezes.

Evergreen trees, as the name suggests, keep their leaves throughout the winter, rather than shedding them as deciduous trees do come autumn

Deciduous trees draw all their water into their trunks and lose their leaves to enter a dormant state for the colder months of the year. However, by keeping all of their leaves, evergreens can continue to photosynthesise throughout the winter months, albeit at a reduced rate due to lower temperatures and shorter daylight hours .

Plants obtain their energy through the process of photosynthesis. They absorb light energy from the sun during the day, and use it to turn carbon dioxide and water into sugar (normally glucose) and oxygen. The part of the cell responsible for photosynthesis is the chloroplast, which contains lots of chlorophyll. Chlorophyll is a molecule which contains a magnesium ion at the centre. This magnesium ion has many double bonds, making it highly efficient at absorbing energy. This light energy can then be transferred into chemical energy. Chlorophyll can absorb red and blue light, but not green which is instead reflected, hence when we looks at leaves, they appear green in colour.

However, by keeping all of their leaves, evergreens can continue to photosynthesise throughout the winter months, albeit at a reduced rate due to lower temperatures and shorter daylight hours

Evergreens tend to grow in nutrient-poor soils. By remaining active year round, evergreens are able to absorb more nutrients than their deciduous counterparts, and thus are able to out-compete them. Evergreens that survive cold winters must employ strategies to protect their leaves from freezing. Pine needles, as seen on Christmas trees, are actually tightly curled flat leaves, coated in a waxy, insulating substance called cutin. Furthermore, pines needles typically contain much less water than the leaves of deciduous trees. This, combined with the cutin layer stops the leaves freezing in very cold temperatures. The leaves will die eventually, but only a few at a time, and are replaced with new, healthy leaves.

So, while the Christmas tree you may have in your house over the holidays will eventually die (as it is no longer in the ground, and unable to obtain nutrients from the soil), you could plant an evergreen tree in your garden and watch it remain green all year round. Alternatively, you could just purchase a faux Christmas tree from Homebase, and that too will undoubtedly stay green all year round.