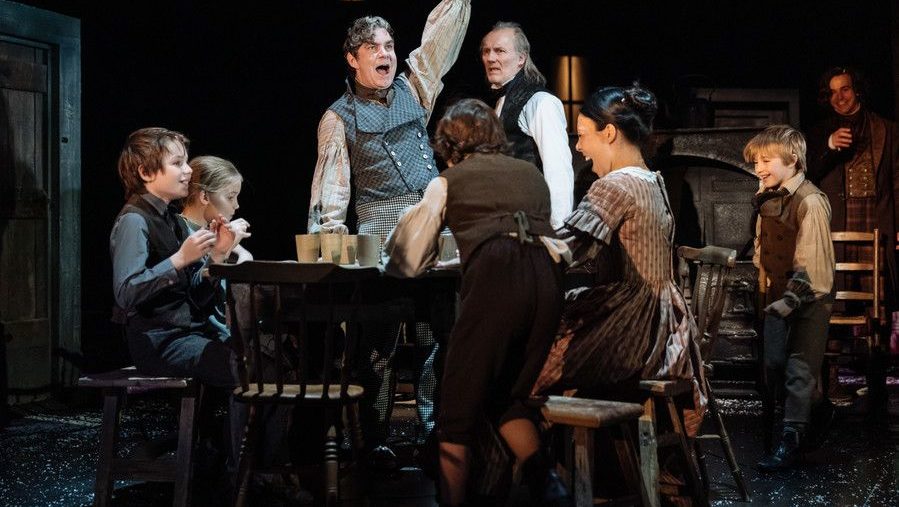 David Edgar’s adaptation of A Christmas Carol is a brilliant retelling of a timeless classic. With its pure view of Christmas, it makes for a wonderful festive treat that’s fun, heart-warming, jovial, and ultimately redemptive.

The production is faultless with excellent effects, set design, costumes and lighting making for an immersive and beguiling experience. It is deftly directed by Rachel Kavanaugh. The scene transitions are seamless, with the set fluidly morphing from bedroom, to living room, to street. The acting, too, is fantastic, with Aden Gillett brilliantly depicting Scrooge’s transformation from old curmudgeon to a far more compassionate version of himself. The child actors are also particularly impressive.

With its pure view of Christmas, the play makes for a wonderful festive treat

One of the most powerful aspects of the play is undoubtedly its message. It makes a highly compelling case for generosity and compassion, without ever feeling preachy. Whilst it keeps its original Victorian setting and does an excellent job of transporting the viewer into a very different world, the themes of poverty remain relevant. The discussions of child mortality, work conditions, and the lack of access to education never alienate the viewer, but rather give a more accurate understanding of the world that prompted Dickens to write the play in the first place.

Furthermore, the dialogue remains highly accessible to a modern audience (of all ages), expertly negotiating the tensions between accurate historical depiction and modern relevance. There is even a Trump joke slipped in. But the more modern aspects of the play are deftly introduced and remain subtle. This can be seen in the opening up of the cast to include women in some of the more gender-neutral roles, such as those of the three ghosts, which feels very natural. I wouldn’t even have noticed, had someone not pointed it out to me. The timeless nature of the play is well conveyed by the removal of unnecessary barriers to modern comprehension and enjoyment, whilst never feeling anachronistic.

It makes a highly compelling case for generosity and compassion, without ever feeling preachy

In this adaptation, Charles Dickens is depicted – in an almost Brechtian manner – writing the play as it is being performed, tweaking bits here and there, changing the ending, as suggested by his friend (and editor), John Forster. He is engagingly depicted as an activist, wanting to write a political tract, and in the end writing something much more transformative, accessible and enjoyable. It ends up being a far cry from the political pamphlet discussed at the start, and includes touches of comedy, song and dance, though never in a way that disrupts the story. The dance scenes are also brilliantly choreographed and add nicely to the festive nature of the performance.

With its redemptive story arc, strong yet simple moral message, and its light touch in dealing with heavy themes, the play makes for fantastic Christmas viewing and would be enjoyable for the whole family. My only critique would be the prohibitive cost of the tickets, although this price is fairly represented in the extremely high production values. If you are looking for a revolutionary retelling of the classic Christmas fable, then perhaps you might be disappointed, but this a well-known story told very well. Ultimately the play leaves the viewer wanting to be a better, kinder version of themselves, which can never be a bad thing.

Merry Christmas and God bless us everyone.

A Christmas Carol is at the Royal Shakespeare Theatre until 20 January. Tickets are available here.