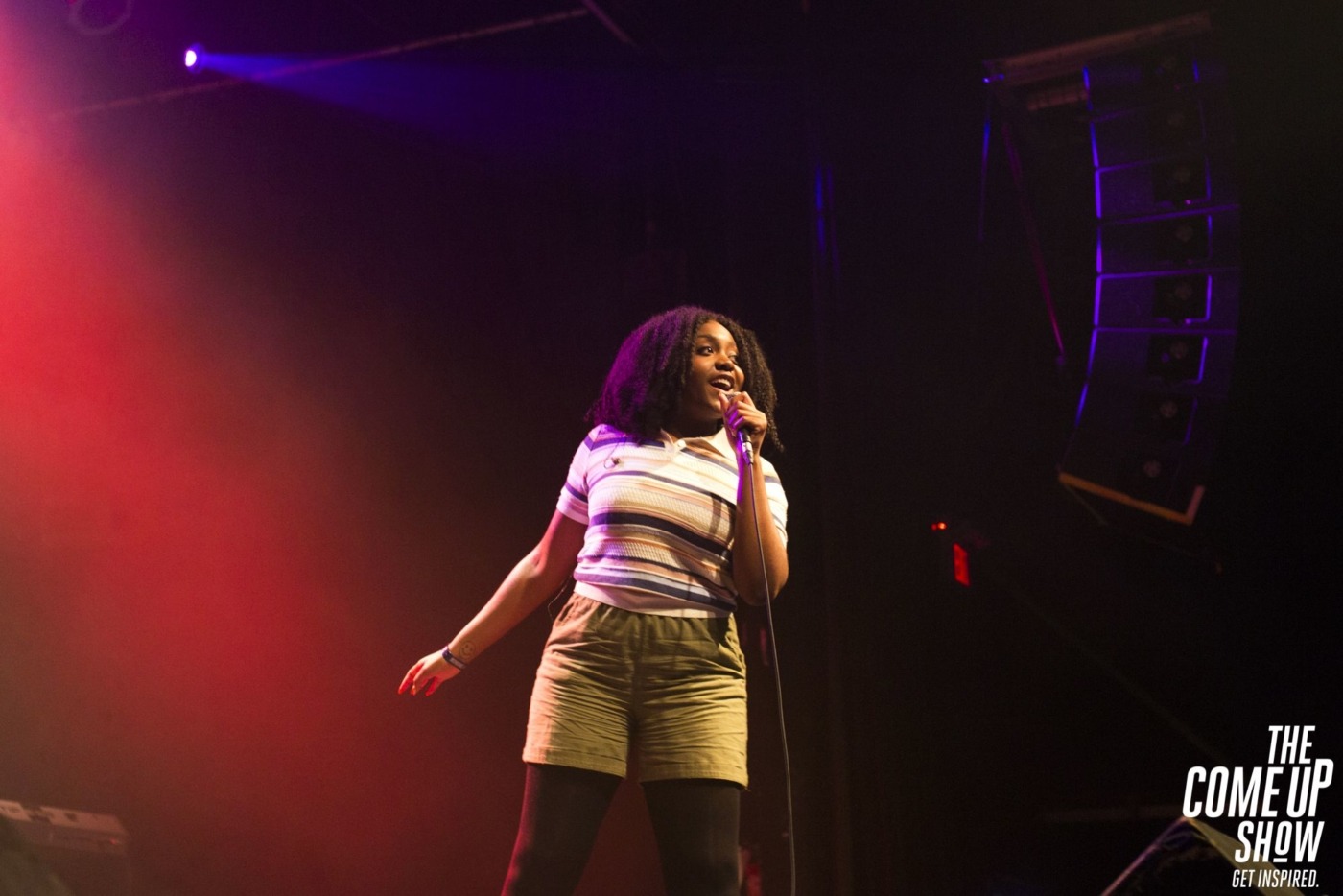 26-year-old Fatimah Warner, better known as Noname, rose to hip-hop stardom after she contributed a verse to Chance the Rapper’s 2013 mixtape Acid Rap, back when she went by the alias of Noname Gypsy (she later omitted “Gypsy” after being informed of its racialised connotations).

In July 2016 Warner released her first solo mixtape, Telefone, which was hailed by music critics as one of the best albums of the year – despite not technically being an album. Up until September of this year she had not released so much as a follow-up EP – unusual for an up-and-coming rapper – nor was she signed to a record label, even whilst in receipt of offers. Warner has her own style, and in her debut album Room 25 she retains the fierce individuality that garnered Telefone so much praise.

Between Telefone and Room 25, Warner had her first, albeit intense and short-lived, romantic relationship as well as her sexual debut, a development she attributes to her increased confidence following Telefone’s success. Room 25’s title, therefore, reads as a metaphor for her sexual awakening (“Room” alludes to a hotel room, and Warner was 25 when she lost her virginity).

Noname could have taken the obvious approach to female sexuality taken for example by Nicki Minaj; instead though she cleverly subverts the expectations of the listener

Case in point is opening track ‘Self’, where Warner raps lyrics such as “my pussy wrote a thesis on colonialism”.  Here Noname could have taken the obvious approach to female sexuality taken for example by Nicki Minaj; instead though she cleverly subverts the expectations of the listener. Listening to a rap record and hearing the phrase “my pussy”, you generally know the sort of lyric that will follow. Writing a thesis on colonialism, though? That’s originality.

That isn’t to say the hyper-sexed approach stereotypically associated with female rappers is a bad thing, or that Noname should be viewed as their pure counterpart. Indeed, Noname raps more conventionally about sexuality elsewhere on the album, for example in ‘Montego Bae’, a whimsical ode to a fantasy love (“So he gon’ fuck me like I’m Oprah, classy bitch only use a coaster”). But Noname is doing something important here by showing that there is more than one approach to sexuality that is available to female hip-hop artists.

After wowing us with her “thesis on colonialism” bar, Noname continues: “In conversation with a marginal system in love with Jesus/And y’all still thought a bitch couldn’t rap huh?”. There’s a confident self-assurance in her voice inflected with laughter when she reaches the final bar. Noname is playful, confident, political – and she sets the tone for the rest of the album.

Unlike her Chicago counterpart Chance, to whom she is frequently compared, Noname doesn’t collaborate with big names on her songs

After ‘Self’ is ‘Blaxploitation’ (a portmanteau of “black” and “exploitation”, as well as a ‘70s film genre) which begins with a sample from 1975 blaxploitation parody Dolemite. Noname then proceeds to poke fun at stereotypes of African-Americans, at a pace that feels frantic compared to her usual slow, relaxed drawl. This at once shows versatility and provides ammunition against critics who doubt her abilities as a rapper.

Unlike her Chicago counterpart Chance, to whom she is frequently compared, Noname doesn’t collaborate with big names on her songs. Perhaps the most prominent collaborator on the record is fellow Acid Rap collaborator SABA, who features on “Ace” – a well-respected wordsmith, no doubt, but he’s no Kanye. By choosing her collaborators with musical harmony rather than status in mind, she makes a bold statement in a genre (and of course, world) preoccupied with status.

Black women are rarely given cultural space to be vulnerable, but Noname tells us that it’s possible to be strong while still struggling

‘Window’ showcases the artist’s new-found insights on love, which will no doubt strike a chord with those listeners who have dated men: ‘“You want a nasty bitch, psychiatrist that cook like your mama, and all you got was me, me, me,” she laments. The song is a highlight of the album, featuring lush instrumentation and chilled chorus from producer Phoelix. ‘Window’ is the ‘Reality Check’ of Room 25. Like the latter, it’s a song about getting your shit together, urging listeners to “quit looking out the window” and instead focus upon finding themselves.

The quality of the album seems to dip somewhat after the first four tracks – ‘Montego Bae’, for example, is fun, but feels like it could be a b-side – though it picks up again with the infectious ‘Part of Me’, where Phoelix steals the show with his earworm, “I have to focus on the part of me that I’m trying to feed”. This song could be a radio hit for Noname and Phoelix – they certainly show potential as a quality pop-rap duo.

When ‘With You’ opens with guitar strings, for a second you think that Noname might have made, horror of all horrors, a generic love song. But within seconds Noname is talking about suicide, “fluctuations on scales” and “missed therapy sessions”. She presents a soft and vulnerable persona, and in doing so challenges the status quo. Black women are rarely given cultural space to be vulnerable, with the trope of the “strong black woman” all too often preventing them from being open about mental health struggles, but Noname tells us that it’s possible to be strong while still struggling.

It’s difficult to make incisive yet comforting music about police brutality, but Noname does it.

Importantly, she does this without projecting a feisty persona. The biggest women in rap – think Nicki Minaj, Lauryn Hill, Missy Elliott, and more recently, Cardi B – have all forged their careers by marketing themselves as assertive women, adopting the bravado of their male peers to demonstrate that they belong in the game. While they have inspired millions by modelling these assertive femininities, the lack of vulnerability associated with such posturing limits the emotional range available to up-and-coming female rappers. Noname has no hard exterior to speak of, allowing her fans to connect with her at an intimate level and by extension engage in much-needed healing.

When an artist releases a stellar debut, their sophomore offering always runs the risk of being a disappointment. Fortunately, Room 25 showcases the type of excellence that is as apparent on the first listen as it is on the 20th. Noname demonstrates a knack for making music that is at once comforting and familiar, witty (there are laugh-out-loud-funny moments on the album) and thought-provoking. It’s difficult to make incisive yet comforting music about police brutality, but Noname does it. In a manner reminiscent of 90s jazz rap outfit Digable Planets, she blends politically conscious lyrics with buttery smooth, blues-influenced beats, and the result is something truly special.

At a mere 34 minutes long, Room 25 leaves you wanting more. Is it as good as Telefone? I don’t think so. But given that Telefone is easily the best rap record I’ve ever heard, that’s hardly an indictment. Room 25 feels fresh, like the work of an artist who’s developing both artistically and personally.