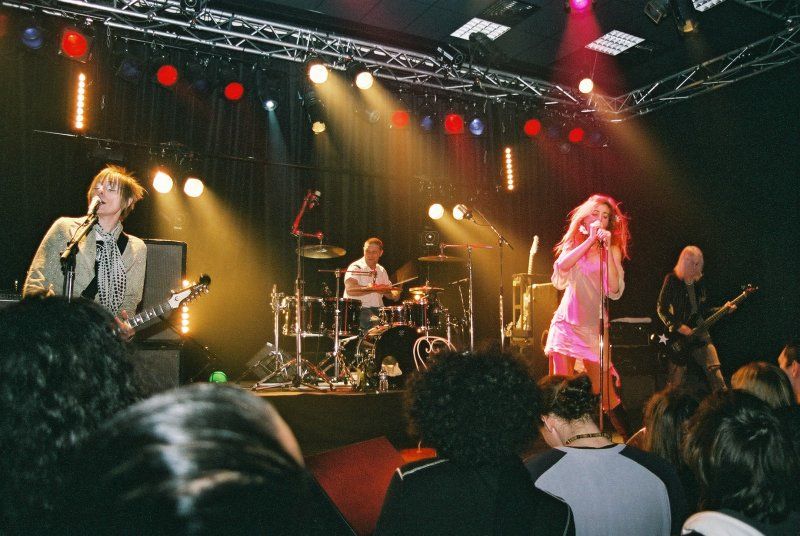 How does one begin to describe KatieJane Garside? Frontwoman of folk noir duo Ruby Throat, she began her musical career in 1989 in punk outfit Daisy Chainsaw, aged just 18. Since then, her career has been characterised by a cycle of embracing a degree of public engagement for a period of time, before retreating again into her own world, only to re-emerge a few years later. In spite of (or perhaps because of) her tendency to mysteriously go into reclusion every few years, she has over the decades attracted a devoted underground following that idolises her for her unique voice, unsettling stage presence and Opheliac aesthetic.

The first of her disappearances occurred in 1993. Daisy Chainsaw’s commercial success was too much for Garside, resulting in her leaving the band and vanishing from the public eye for a number of years before resurfacing in alternative rock band Queenadreena in 1999. While hardly top 40, Queenadreena did achieve recognition in the UK’s alt-rock scene, supporting the likes of Garbage and Nine Inch Nails on tour before eventually dissolving in 2010, having released a total of four albums.

In the 3 years preceding  Queenadreena’s break-up, Garside formed Ruby Throat with Chris Whittingham, a guitarist whom she met while he was busking in the London Underground. A departure from the disquieting fury of Queenadreena, much of Ruby Throat’s discography is soft and delicate-sounding; lyrics are dark, but the vibe is generally more suited to lying in a field than thrashing in a mosh pit. Beginning with their 2007 debut, The Ventriloquist, the duo (who are also a couple) released a string of albums, which were positively received by fans.

We are enthralled by Garside, who combines breathy lullabies with feral squeals and demonic screams, squirming around the stage like a woman possessed

And then, in 2014, Ruby Throat disappeared for four years to sail around the world on their boat, Iona. A long backstory, I know – but it’s necessary to understand the significance of what is happening tonight: Garside has returned to shore, and Ruby Throat are in London for a sell-out surprise gig at Folklore, a small, whimsically decorated venue in Hackney. It is their first gig in 9 years.

The night begins in Ruby Throat’s usual offbeat style; with no support act. We are waiting for an hour in the venue after the doors open. At most gigs there’d at least be music playing from the backstage, providing something of an antidote to our boredom, but instead, there’s an instrumental that plays on a loop. For 60 minutes. At any other gig, I’d be annoyed. I mean, no support act — really? But this isn’t your typical gig. I join a cluster of about fifteen women who eventually grow tired of standing and decide instead to sit cross-legged on the floor, where we remain for the rest of the gig. Garside and Whittingham climb through our sea of bodies as though this is entirely normal behaviour, Garside wearing a ripped dress, oversized sunglasses, and cardboard cut-out rabbit ears. Evidently, the bar for ‘normal’ is set differently here.

Without fanfare, they begin the set. The intimate setting means it would be easy for Garside and Whittingham to talk to the crowd if they wanted to, but for the most part, they don’t engage with us. Perhaps it’s because they don’t need to; we are enthralled by Garside, who combines breathy lullabies with feral squeals and demonic screams, squirming around the stage like a woman possessed. I feel a bit like I’m observing a private jam session, rather than attending a gig at a crowded venue in the capital. Garside’s style of performance is raw, unfiltered, and sometimes uncomfortable to watch. She exudes primal sexuality — a far cry from the calculated sexuality of many performers, it strikes you as something that is beyond her control.

Described by grunge legend Courtney Love as “one of the first true riot grrrls”, unlike Love the decades don’t seem to have taken their toll on her vocal chords

In contrast to Garside, Whittingham has no stage presence to speak of, but it doesn’t matter; with his acoustic guitar he does a great job of creating an atmosphere that complements Garside’s voice, though admittedly she would have been just as mesmerising without any kind of accompaniment. It’s difficult to overstate how phenomenal Garside’s vocal ability is. Described by grunge legend Courtney Love as “one of the first true riot grrrls”, unlike Love the decades don’t seem to have taken their toll on her vocal cords. A versatile instrument that suits folk as well as it does heavy rock, to this day Garside’s voice remains profoundly underappreciated in the independent music world (which I have always suspected is to do with her gender, but that’s an opinion piece for another time).

One of the strongest vocal performances of the night is in a rendition of ‘Stone Dress’, which draws to a close with Queenadreena-esque screaming from Garside. In a recent interview, she stated that she’s ready to make heavier music again, and this performance shows a hint of what is to come. Another highlight is a surprise duet between Garside and her sister Melanie (who also releases music under the alias of Maplebee), who joins the stage to lend her husky vocals to ‘Salto Angel’. “What are you gonna do next, KatieJane?”, Garside says to herself in one rare utterance between songs. Whatever it is, it will probably be brilliant.

Ruby Throat have said nothing yet about whether there will be any more gigs (aside from a half hour set they performed the following day at an indie record store in West London) but the night is evidently a massive success.