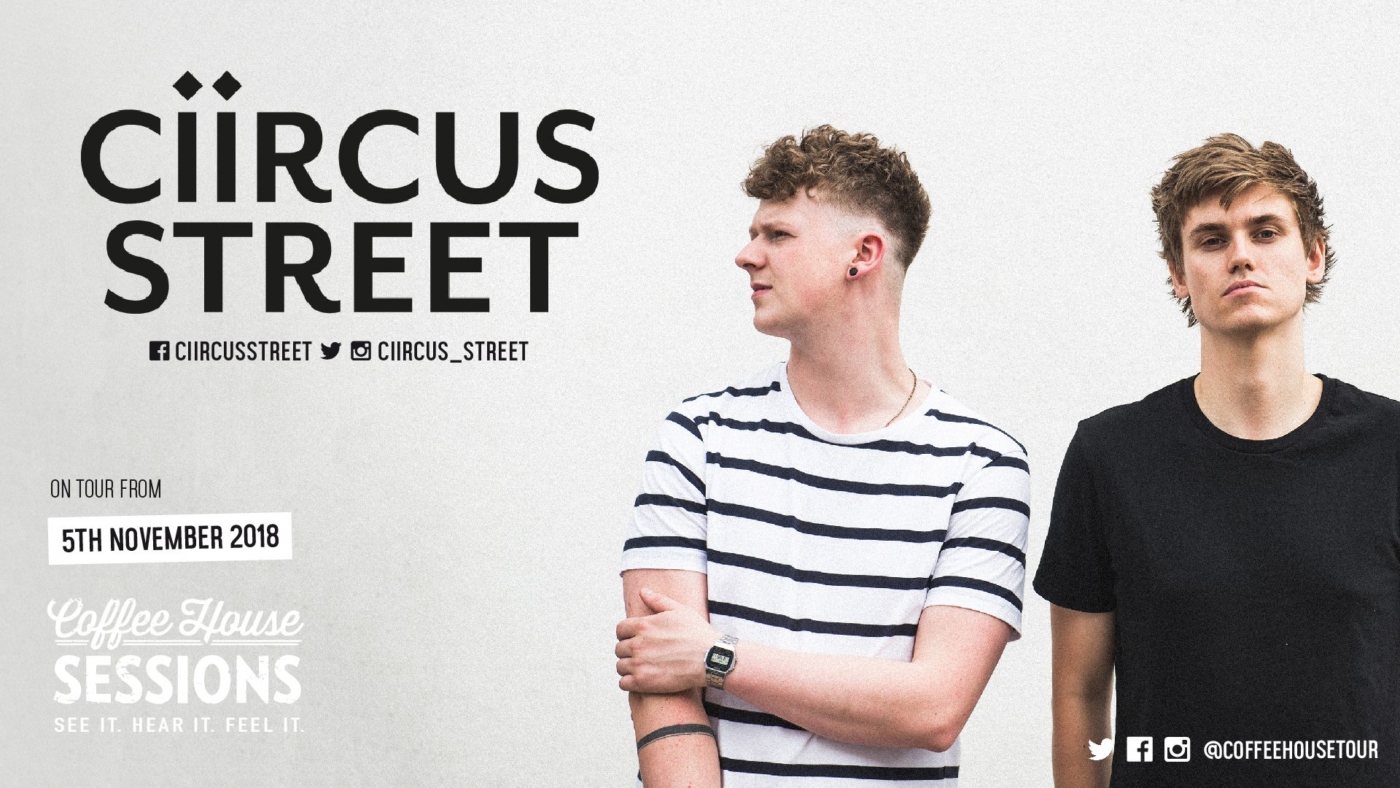 Sam Brett and Jim Crowder from Reading are undoubtedly good friends; you can see it in the looks they share on stage. Having been friends for eight years, they met in college and formed Ciircus Street three years ago, almost to the day – though according to Crowder eight years of friendship isn’t so much to celebrate: “Fully sad now. I’m just upset about it,” he jokes. The pair fell into music, having never shown interest in anything else, after spending their childhood hitting pots, pans and shoeboxes as drums.

The duo are preceded by a shorter set with Sean OB, a songwriter and musician, who sings four acoustic songs, including ‘Two Last Cans’ and ‘Trouble’. His voice and energy throughout his set, paired with the memorable nature of his lyrics, make for a contented audience amongst whom lyrics catch on quickly.

I learn much more about Ciircus Street during the interview after the set. Quite obviously hardworking themselves, Brett and Crowder are clearly inspired by those with a good work ethic, and those who put everything into their music (or those who give the appearance that they do, Crowder explains, because it could be a façade and he’d believe it).

Their style chops and changes as they perform acoustic tracks, but they later tell me they have written a grime EP

For their first two songs, ‘Lost’ and ‘Collide’, Sam is on the guitar while both perform vocals. Their harmonies fit together beautifully, two voices clearly made to sing together. ‘Lost’ was a single released last year, having over 75,000 streams on Spotify, whilst ‘Collide’ is their newest track. Brilliantly written, both songs made for a relaxing atmosphere in the room of stressed students.

Their style chops and changes as they perform acoustic tracks, but they later tell me they have written a grime EP, which is not their usual. Brett explains: “We do a lot of different styles. I think we can very easily go down somewhere we think is too far in a different genre and then we take it back. And then we go, ‘Oh, actually maybe it’s too far back, maybe we should push it forwards a bit.’”

Brett and Crowder are certainly pleased with the Coffee House Sessions tour, which allows them to see many universities and spend a lot of time with each other. But their favourite part has been meeting someone new every day, and I am told that everyone they’ve run into at the six or seven gigs they’ve played thus far have been very organised and very helpful.

After performing a cover, their fourth song was one which remains unnamed. They proceed to ask the audience to share what they think it should be called via Twitter and Instagram. This is by far their favourite song, they said, as it enables them to have fun, move around and get into it a bit more than others.

Before coming to Warwick, the pair played a gig in Oxford where they met someone who two days before had Ciircus Street’s logo tattooed onto his hip. They describe the moment as “mind-blowing,” and Crowder explains how it had “backhanded him a bit – in a good way.”

The duo end with a new track, ‘Broken’, which is set for release on Spotify at midnight on the day of the gig. “We listen to a lot of Lewis Capaldi and kind of like Kodaline vibes for the track ‘Broken’, I guess,” says Brett, and Crowder expands. “Yeah, for ‘Broken’, I’ve been trying to inject a bit more consistency and emotion into the music because some of the songs we wrote before, and especially the first one, didn’t mean anything.”

The pair joke that they plan to split up after this tour, before going on to discuss how their three-year anniversary as a band

When asked what their plans were over the next year, the pair joke that they plan to split up after this tour, before going on to discuss how their three-year anniversary as a band had only just passed.

They agree that they intend to make more music and play more festivals. Crowder says that the pair had quite a “chilled out summer” this year because they were planning. “We had a release last winter, and we have a release tonight…we did a bit of writing, did our own thing. I moved house so it was pretty hectic. Now, next summer we’ve actually got the space and time to really hit it.”

After releasing ‘Lost’ last winter, they hope to hit the ground running with their latest release and make a couple next year. Brett joked: “Release that grime EP, finally!” But most importantly, the pair will soon be performing their first ever headline show at Servant Jazz Quarters in London.