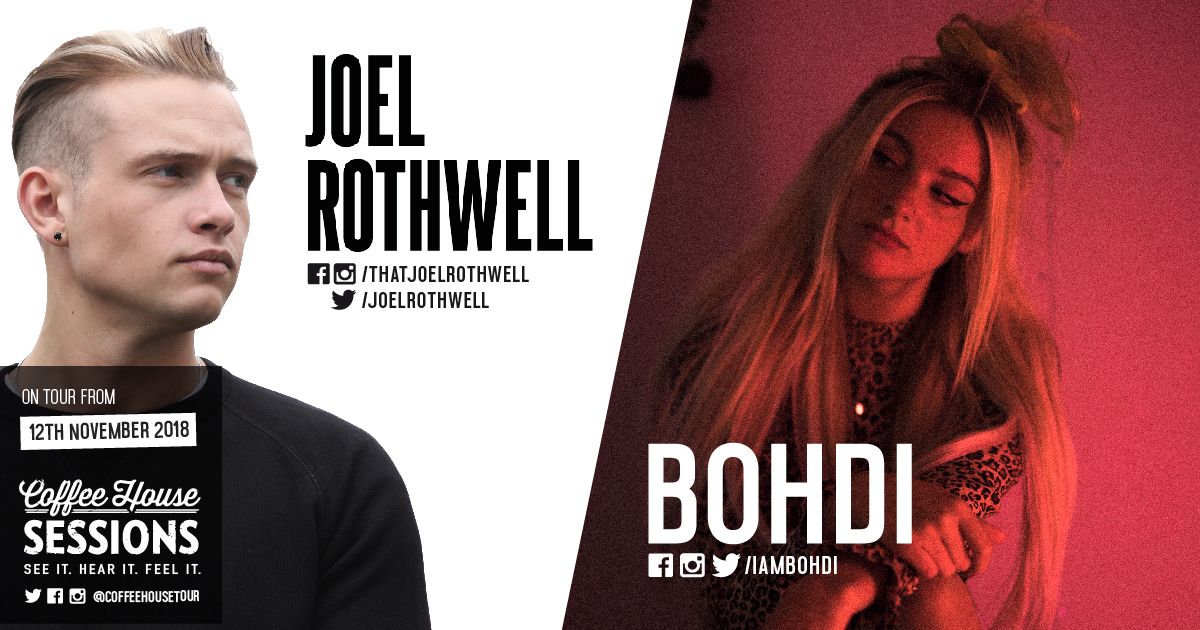 Joel Rothwell is a Mancunian singer-songwriter who grew up writing and playing music alongside his Rebecca and who together took influence from Eminem, Maroon 5 and P!nk. He may be tiptoeing around the music industry at moment, but for a 20-year-old, he can at least say he has performed alongside Gary Barlow, and for a good cause.

Rothwell sets the tone by announcing his hopes to “kickstart your Thursday night” – an ambitious yet also completely plausible objective with which to begin a show. Released just two weeks ago, Rothwell commences the half-hour slot with his debut single, ‘Beautiful Monster’. It opens with a simple chord sequence and a few clicks, but the most memorable element of the song is its lyricism (“she’s got a temper, she’s got no control/ready to explode, explode”) rather than its musical arrangement.

After this song, two girls leave Curiositea by the entrance which opens onto the SU atrium and Rothwell – the charmer that he is – playfully calls after them. “Girls, where are you going?” he says, before explaining that he’s “only messin'”.

This interruption is followed by Rothwell’s version of Dua Lipa’s breakup anthem, ‘New Rules’. The band’s arrangement of this is much like the original, so I wonder if there’s a reason Rothwell has chosen to perform this in particular. I ask him later about the choice of cover here, and he tells me that the song is popular among artists on the Coffee House Sessions tour this year.

Between ‘New Rules’ and the following number, Rothwell humbly states that “it’s just me today”, and mentions that another artist, BOHDI, hasn’t made it to the set today – though the way he speaks about her implies they’ve been on the road together for a while.

‘Satellite’ is another original with a catchy chorus. Using an uncomplicated four-chord structure, this song is a simple serenade to tap your feet in time with. A middle eight appears twice in the song, therefore breaking up a fairly repetitive – in the best way – track which draws you in with its scattering of space-related romantic jargon.

Rothwell then takes a break to tell the audience about his gig at Oxford Brookes University just an hour before (“that was very different”, he exclaims) and to introduce his band: Commie on the guitar, Michael on the drums and Chris also on the guitar. Rothwell then goes on a tangent, telling us about how his first band member contracted food poisoning earlier on in the tour (Commie has just refused a hot chocolate on the house) and in doing proves he’s good with an audience.

Rothwell is full of fun, and it shows

He then proceeds to the next song, explaining that ‘Just Don’t Know’ is the newest original and will be released this Friday, 23 November. At first a ballad, the percussion and bass it employs gives the track space to morph into the second, perhaps more passionate serenade.

“Are you feeling left out because I started singing to her? I’ll start singing to you now,” he assures a girl in the audience. His boyish charm works, and several people laugh – but he doesn’t stop there. “Hope you guys are changing that coffee to alcohol very soon,” he continues, prompting surprise from most. He tells us that if we were in Manchester, by this time (not even 5pm) “everyone would be drunk right now”. Rothwell is full of fun – and it shows.

As if the previous tracks weren’t “deep” enough already, Rothwell gives us a spoiler: the next one is “a really deep love song” aka Maroon 5 ft. Cardi B, ‘Girls Like You’. It’s a few beats slower than the original, and rather than adding a touch it’s an omission that makes this cover Rothwell’s own – it would have been interesting to hear his rendition of Cardi B’s verse in Curiositea.

This leads in nicely, however, to ‘Oxygen’ which is the final song of the set. His soft vocals complement the equally soft strumming of guitars, and the subject of this track added to that of ‘Satellite’ shines a light on Rothwell’s ability to bridge scientific discourse and romance rather prettily. Yes, “I can’t breathe in, I can’t breathe out” is a corny line for sure, but it’s something most of us will experience at some point in our lives – and Rothwell makes it totally accessible not for most, but all of us.