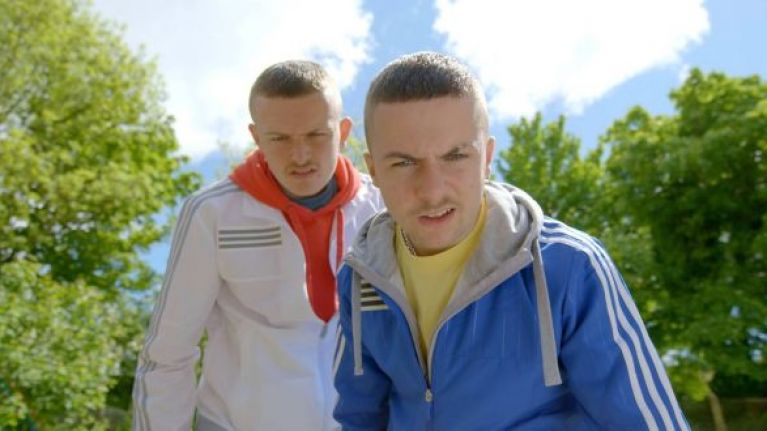 Based on the successful 2016 film of the same name, The Young Offenders TV series follows the lives of two rebellious teenagers in a small Irish town. Despite it being a comedy about Jock (Chris Walley) and Conor (Alex Murphy) who are terrors to the local police, the series has surprisingly emotional moments.

The Young Offenders is 6 episodes long and was produced by BBC Three, famed for their fresh content aimed at a younger demographic. The first-person narration by Conor makes the audience feel part of the duo’s world, as we watch the two best friends try to navigate dating and turbulent home lives whilst living below the breadline. The pair is introduced as rebellious tearaways who are a nuisance to their town. However, as the series unfolds we see that the ‘tough’ exterior of the characters is simply a façade, they are merely young and playful, their actions ill-executed pranks much to the dismay of Conor’s mother, Mairead (Hilary Rose).

Mairead has an obviously distaste for Jock, stating that he is a bad influence on her son and she loathes his presence

A standout part of The Young Offenders is the 4th episode where Conor, Mairead and Jock all go on a road trip to purchase a used fridge from a farmer. The road trip is of course not without its difficulties as the trio get stranded on a road with a flat tyre. Additionally, Mairead has an obvious distaste for Jock, stating that he is a bad influence on her son and she loathes his presence. In a hilarious twist, upon arriving at the farm for the fridge, the two teenagers encounter a duck that the farmer wants to kill. Jock and Conor pretend to kill the duck themselves, but instead smuggle the bird back into the car and take it back home with them.

At the end of the episode, after yet another argument between Jock and Mairead, Jock is left to go home to his father. The audience has seen in a previous episode that Jock’s father is an alcoholic, succumbing deeper into a liquor infused abyss after the death of Jock’s mother. Mairead, feeling guilty about her angry out lash towards Jock, follows him into his house where he is being beaten by his father. This scene is shocking to the audience as it is a stark contrast to the light-hearted mood of the show and reveals that despite the seemingly carefree attitude of Jock, he faces incredible difficulties in his home life. Mairead, appalled by Jock’s dad’s actions invites Jock to join the family and thus the road trip family become a new family – the duck included.

Issues are addressed with the same undercut of humour to show that if you have a friend or a mother who can laugh in the face of disadvantage with you, then life can be fun and enjoyable whatever the difficulty

The most appealing part of The Young Offenders series is the interweaving of real-life difficulties such as abusive parents and poverty, however these issues are addressed with the same undercut of humour to show that if you have a friend or a mother who can laugh in the face of disadvantage with you, then life can be fun and enjoyable whatever the difficulty. The Young Offenders is brilliantly funny and very well written, perhaps more so than the film on which it was based. I am thoroughly hoping that The Young Offenders will be given a second series, as the audience has been left on a cliff-hanger, and there are so many more stories and adventures to unfold between the dynamic duo of Jock and Conor.