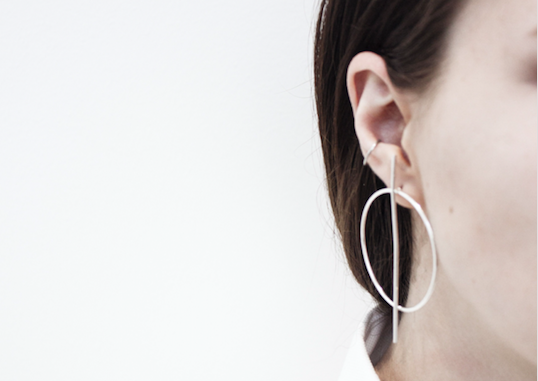 My mum hates piercings. She doesn’t understand why anyone would want a “hunk of metal lodged in their skin.” Whenever she uses that phrase, just for a moment, I can almost understand the objective absurdity behind the eight tiny holes in my ears. Such an unglamorous description may be apt for archaic ceremonies: when Julius Caesar pierced his nipples to demonstrate his strength and virility, he probably didn’t use a sterilised gun; the Aztecs may have warned off bad spirits with their earrings, but they wouldn’t have had TSP to ward off infection. The piercing game has changed, and these “hunks of metal” have adopted new roles in the Western social climate.

Jewellery is more diverse than it ever has been. A new piercing doesn’t necessarily mean the clunky, industrial steel rings of the 90s (unless you do what you’re told, and keep the big bars in for the whole 6 weeks), or the expensive pearls of the early 20thcentury. High-street shops provide earrings for every occasion: sensible studs for the everyday, giant hoops for nights out, feathers, gems, stretchers, letters – even zips. Having an earring hardly makes you grungy if what you’re sporting in each lobe is a twinkly silver heart.

Despite the high-street abundance, there is still a flourishing market for the rich, as well as famous, to wear beautiful, valuable jewellery

It isn’t just the jewellery that has evolved, but the actual piercings. There are nipples, tummies, noses, tongues, brows – not to mention every part of the ear. Although the notion of body modification through piercings has been around for thousands of years, many have only been identified recently in Western culture. A lot of people get confused when I talk about my rook or my conch. The ‘daith’ piercing, which sits towards the inside of the ear, was only coined in 1992 and still hasn’t made it to the Oxford dictionary.

Like most appearance-related trends, celebrities had a huge impact on the piercing revolution. Jennifer Lawrence, Miley Cyrus, Kylie Jenner and Rihanna all rock at least four ear piercings – often with elegant silver or diamonds. Unlike us, however, these women are probably not heading to Claire’s or a high-street tattoo parlour to get their ears done. Maria Tash is a designer jeweller, and her New York store has been frequented by celebrities and wealthy fashionistas for over 21 years. For the first time ever, a Maria Tash store has been opened in the UK, and in London, at first glance, the prices seem extremely reasonable – between £15 and £30 per piercing. When you read the small print, however, the piercing charge does not include that of the earring, which can cost anything from £200 to £2000. Despite the high-street abundance, there is still a flourishing market for the rich, as well as famous, to wear beautiful, valuable jewellery.

The potential assumption that earrings are a symbol of femininity, or for homosexuals, has been challenged

It’s not just women, either. Elton John wore earrings. Kanye West, Justin Bieber, and Gok Wan, amongst many other male celebrities, are proud to sport more than one piercing. The days of ‘if you have your ears pierced, you must be gay,’ which was the rumour that lay down the law in my primary school, seem to, finally, be evaporating. Though the types of earring are far more restricted in the men’s section, there has been an increase in the number of men with piercings. Again, the potential assumption that earrings are a symbol of femininity, or for homosexuals, has been challenged.