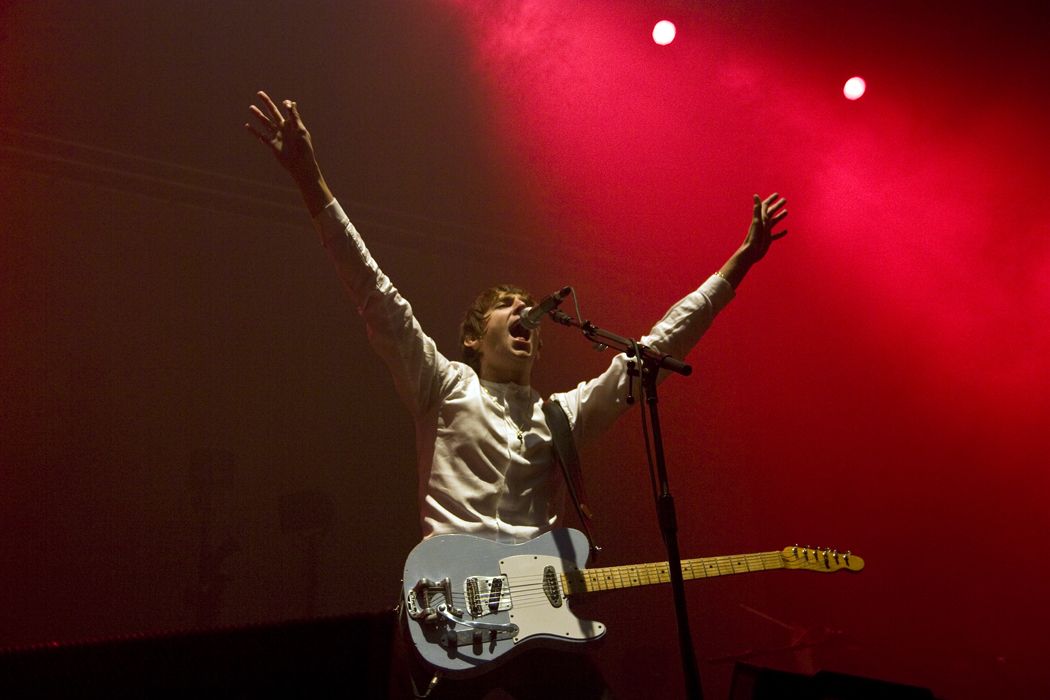 Miles Kane makes very good music. On a dreary day in May, I found myself in Coventry’s Kasbah to hear him play.

I had always thought that most of Miles Kane’s fans had found him through The Last Shadow Puppets, a supergroup he formed with Alex Turner in 2007; his performance confirms my suspicions. Stood beside me in the queue is a veritable doppelgänger of the Arctic Monkeys frontman, who a sports a mountainous dark quiff slicked into place by a barrel’s worth of gel.

It seems a shame that people only know of Kane through his association with Turner. Kane was the lead singer and guitarist of Liverpool band The Rascals before they called it quits in 2001, and he later began a solo career, releasing his first album ‘Colour of the Trap’ in 2010 and ‘Don’t Forget Who You Are’ just a few years later. Alongside his solo work, Kane made two albums with The Last Shadow Puppets.

The titular words “COUP DE GRACE” – of Kane’s new album – are written in huge pink letters behind the stage. A glossy black bar separates the scuffed dancefloor from well-stocked fridges filled with twinkling bottles. A sign reading “No drinks allowed on the dancefloor” – heeded, I am sure, by nobody – is illuminated by purplish light. While I hear many broad, northern accents, it is clear the audience has come from all over, and this itself is a testament to Kane’s popularity. Endearingly, as soon as the doors fling open, a company of his most hard-core fans storm towards the stage and press them- selves against the railing.

The opening band are from Brighton. I would refer to them as something other than “the opening band”, but their name – though it was mentioned three times – completely eluded me. Relentless and comprehensive Googling since has turned up nothing. This is a shame, because they were quite good, combining Smiths-style jangly riffs with a cultivated aesthetic (bob-cuts and blazers).

Every song in the interval commences with a momentous overture of groans as the crowd realises that Kane’s performance won’t start for yet another three minutes. A group of lads try to get us to chant “Mi-les Kane! Mi-les Kane!” in protest. He eventually emerges. His hair is now cut short, so it’s harder to see the fabled resemblance to young Paul McCartney.

Before attending his concert, I had always been surprised at how few shirts Miles Kane wore, afford. given As he how walks many out, he could wearing presumably a leather jacket (no shirt) and light, pyjama-bottom-style trousers, a sweaty miasma hangs over a boiling, heaving sweaty crowd. They are frantic.

He opens the with ‘Loaded’, shouting “Coventry, how the fuck are you? It feels good to be back.” He then plays ‘Inhaler’ and ‘Taking Over’, and premiers on his new ‘Cry On My Guitar’ (which appears on his new record Coup De Grace) before playing the album’s title song.

Why is Kane’s music so good? Working out what separates him from the bristling selection of indie rockers feels like an exercise in futility. Most of his songs are about girls. Sometimes he gets the girl; on other, rarer occasions, he doesn’t. Often the girls leave. This is the bread-and-butter of his genre, so it’s hard to identify why he stands of his out.

I digress. For one, his guitar melodies are very catchy. Indie rock has a tendency to be slow, moping and misanthropic, the sigh of an oppressed creature. But this dearth of bravado has pushed a receptive mob, hungry for bluster and boasting, into Kane’s arms. His music is perfect for clubs. The crowd swiftly descends into a mosh pit of warlike intensity. The moshers have an Archimedean obsession for making circles of people, and then colliding with each other. Harried on all sides by competing forces of aggressive mosh and defensive anti-mosh, and backed by heavy air support (full pints sailed over at head-height), I retreat.

Miles Kane is also good because he’s an incredibly charismatic performer. Aware that he’s the centre of attention, he never embarrasses himself trying to catch our eye, opting instead to carry himself with perfect showmanship and confidence. When he’s asked to describe himself in interviews, the words “ambition”, “swagger”, and occasionally “arrogant” crop up – a piercingly accurate introspection from Kane.

Friends, readers, countrymen: consider what Nation it is whereof ye are. England needs rock stars. We need them as a safety-valve – without them, our British reserve would build up intolerably, causing the proverbial stiff upper lip to quiver. We need energetic, swaggering, leather-jacketed braggarts. We need hedonistic men of guitars, of sex and drugs and rock and roll. We need Miles Kane.