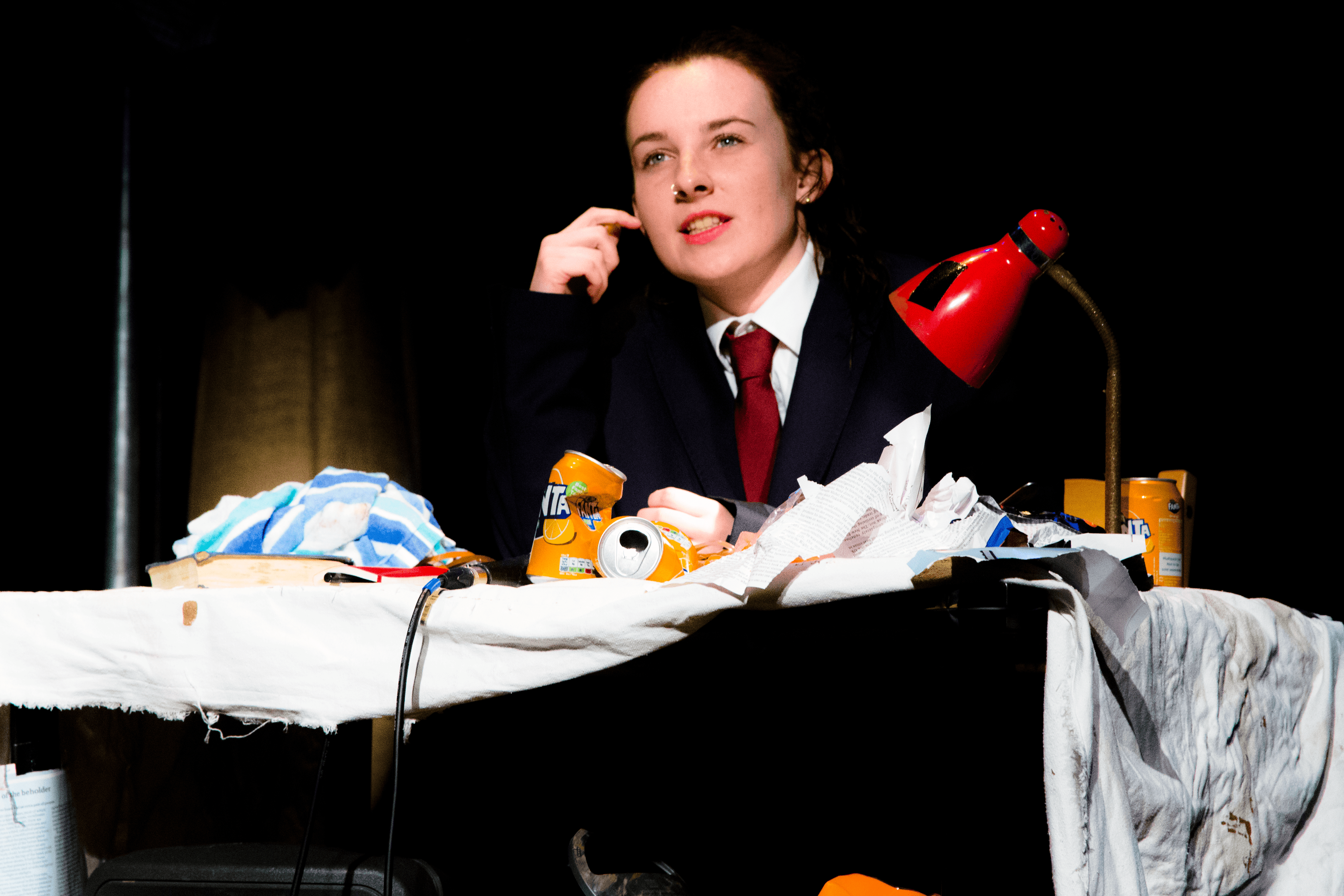 Performed on May 4 and 5, Misterman by Enda Welsh was the latest student production to be performed in the Goose Nest. An ambitious collaboration between WUDS and Tech Crew, this was the first close collaboration of its kind between the two societies, and opened up new possibilities to create a true spectacle of performance. Misterman follows the story of Thomas Magill, a tortured and socially outcast character who records all of the sins of his town, Inishfree. The play uses these recordings to show how Thomas views the world around him, and charts how his obsession changes from being just slightly unnerving to being extremely visceral and violent.

Traditionally a one-man production, this version, co-directed by Matt Owen and Oscar Sadler, explored the character further by having two different actors playing Thomas. Daniel Denton-Harris and Molly Parker both gave nuanced and harrowing performances, each bringing out different aspects of Thomas’ character. In order to get the full sense of the vision, audiences were invited to watch both performances; however, a sense of both interpretations was gathered by having the final moments of each performance being performed by the other actor. In these moments alone the audience could see the differences in interpretation: Daniel Denton-Harris’s tortured and almost non-human portrayal was set against Molly Parker’s more childlike characterisation. This was an effective touch as it acknowledged the multiple interpretations that can be made of Thomas’ character.

Apart from the ending, however, the actor playing Thomas was on stage for the entire performance. Both actors gave incredibly impressive performances, playing both the complex and increasingly damaged character of Thomas as well as switching their physicality to play the various people with whom Thomas interacts. The comedic moments were juxtaposed with darker scenes and moments of quiet introspection, which both actors carried beautifully. As two first year students, both Molly and Daniel showed a wealth of talent and commitment, producing two varied and mesmerising performances, and it will be exciting to see what these two actors do in the coming years at Warwick.

The comedic moments were juxtaposed with darker scenes and moments of quiet introspection, which both actors carried beautifully

At its heart, this play is a study of how a character with such a strong obsession can spiral into becoming a destructive force. The production was given another level of spectacle by the use of soundscapes to create the audio of the tapes live on stage and show Thomas’ perception of the world. These soundscapes were created by the ensemble, who spent the majority of the play in the darkness surrounding Thomas, using a myriad of objects and techniques to create sounds. The ensemble, consisting of Isi Tucker, Niall McDaid, Bronte Skey, George Chopping, Niamh Murphy and Tom Fletcher, brilliantly complimented and augmented the already impressive production through their singing, speech, and sound effects.

The lighting and sound for this production were incredibly ambitious, amplifying the presentation of Thomas’ world through his point of view, under the direction of lighting designer Tom Frampton, co-sound designers Laura Cairns and Cat Buck, and tech manager Danny Vavrecka. The way that Thomas perceived the world was also expressed through the very cluttered and changeable set, which doubled up as both a visual aid for the audience and also as objects from which the ensemble could create aspects of the soundscapes. This is all deconstructed at the end of the play, when the lights are brought up and the ensemble repeats their initial song and dance, this time in full stage light. Throughout this ending scene, Thomas is standing in the middle of the stage repeating, “no one is listening”, whilst the revelry goes on around him. In this moment, the audience is hit by just how abject and outcast Thomas is, and despite his horrific actions we do feel some level of sympathy for this character, who is so unseen and unheard by those around him.

The lighting and sound for this production were incredibly ambitious, amplifying the presentation of Thomas’ world through his point of view

The power of the acting, direction, lighting, sound and costume is exemplified best in the final speech that Thomas makes, directed at the audience whilst standing amongst them. This is a truly harrowing and mesmerising piece of performance, leaving the audience members unable to look away despite the diatribe being directed towards them. Our complicity in Thomas’ misery and anger as the representatives of the people of Inishfree, as well as Thomas’ final abhorrently violent act, lingers with the audience long after the play has finished.