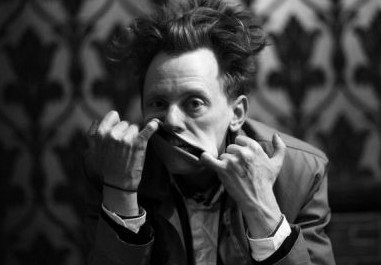 Here is how theatre reviews work: journalists (in my case, ‘journalists’) get free tickets for a play; they (usually) attend the play; then they write a review about said play. On paper, it sounds like a great deal: you get to attend a show for free and the only thing you have to provide in return is a few words on what you thought about it. It is crucial, however, not to take the whole endeavour too seriously; not to panic about having the ‘wrong’ reactions to the show; not to constantly doubt your ability to ‘get it’. I suspected that Christopher Brett Bailey’s Suicide Notes might be a bit out of my comfort zone, but I thought that reviewing a challenging show could be a good exercise. Unfortunately, like Alice, I tend to give myself very good advice but very seldom follow it, so naturally I came out of the show freaking out because I had no idea what to write about it.

A bit of context: Suicide Notes is based on Bailey’s eponymous book of “stories, poems, routines, text collages, vocal tics and verbal diarrhoea”. Since reading it out in full would take, according to the author, about six hours, he reads out a selection of them to the audience each night, sitting at a desk lit by interrogation-style lighting. This description might make the show sound boring; it isn’t.

Bailey has been described by more competent reviewers as “a mesmerising, mouthy athlete, all tongue-twisters and mobile lips”, and as a “possible literal demon”. He certainly does speak very loud and fast; he takes very obvious delight in surreal, contortionist wordplay; and he shocks his audience by relentlessly evoking gory, lurid imagery (hilarious if you possess a specific type of humour – the bit in which he takes an analogy between vaginas and axe wounds way too far is hysterical). The seventy-five minutes of his show are a continuous, roller-coaster-like kind of verbal assault, which explains in part how overwhelmed I felt as I left the theatre. But not completely. I felt like there was something I wasn’t getting.

A conversation with my friend Aishling, who also attended the performance, proved particularly enlightening. What I didn’t pick up on at first was the derivativeness of the show, its debts to a tradition of American literature that begins with the Beats and continues with Bukowski, Palahniuk, and perhaps David Foster Wallace. I have read none of them extensively, systematically, or recently, but their language, imagery and tone are nonetheless lodged somewhere at the back of my consciousness. Aishling, the literature expert, picked up on the references immediately and was subsequently amused but not impressed by the show. Bailey’s work appears less original and outrageous when his debts to his literary forefathers are properly acknowledged.

It is ultimately a genuine expression of anguish, mental hyperactivity and social exasperation

However, Bailey is not just a writer, and Suicide Notes is not just a book (anymore). The performative aspect of the work adds a layer of intensity that distinguishes it from the private experience of reading a collection of short stories. The setting obviously played an important factor: the modest size of the venue and of the audience and our physical proximity to Bailey made this a collective but strangely intimate experience. Having a stranger spill his guts for more than an hour is definitely bizarre (although the good kind of bizarre, I would tentatively suggest). I have a suspicion that being on the other side – being the one who is doing the spilling – must be pretty weird, too. Bailey pulls this off with remarkable nonchalance once he has put on his stage persona.

But something in the way he announced the show was over and left his desk, in the awkwardness of the in-between moments that lie between performance and real life (if such a hard dichotomy exists, which is by no means uncontroversial) suggested a vulnerability and a sincerity that was, ultimately, the best feature of the piece. This is why in the end I can’t dismiss Suicide Notes as just a rehashing of old material or as shock for shock’s sake. Instead, I think that it is ultimately a genuine expression of anguish, mental hyperactivity and social exasperation, an abstract but urgent comment on concerns that feel both deeply personal and extremely general. I have come to appreciate earnestness in art more and more over the past few years, and I appreciate Suicide Notes for its strange, oblique kind of earnestness.

The problem of the evil artist: ‘The Pillowman’ review