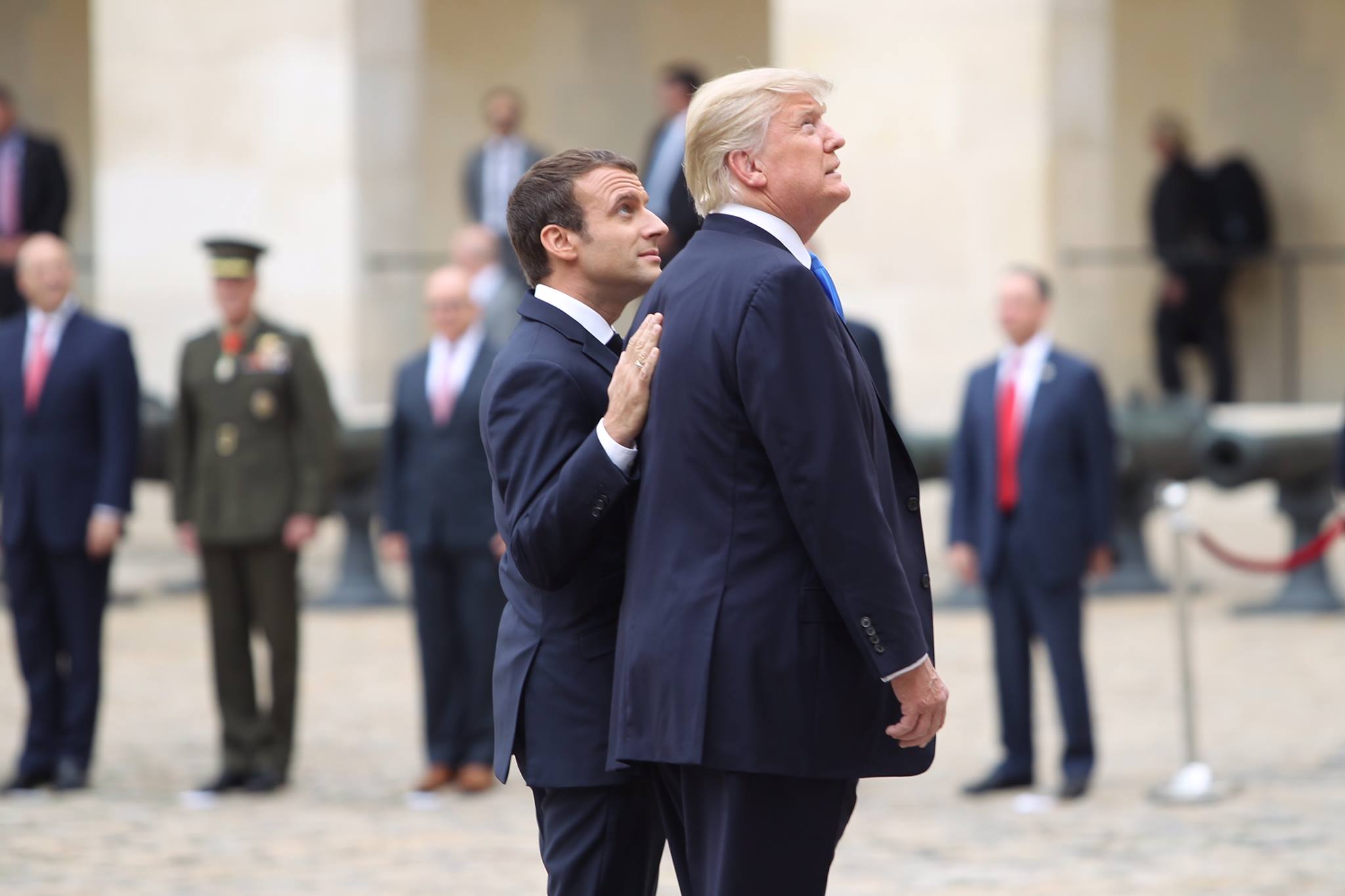 Emmanuel Macron and the re-birth of the “Joie de vivre”

“I  will convince our compatriots that France’s power is not in decline, but that we are at the edge of an extraordinary rebirth, because we hold within our hands all the assets that will and currently make the great powers of the 21st century.”

Emmanuel Macron passionately delivered these words during his investiture speech on 14 May 2017. The election of France’s youngest-ever president at 39 years of age, by an overwhelming majority, marked a new chapter in France’s history.

The presidential campaign gave French citizens the choice between two unprecedented candidates. There was certainly a wave of uncertainty surrounding Macron, considering his minimal experience of public affairs and governance in comparison to his predecessors. Emmanuel Macron embodies the ‘Erasmus generation’– full of confidence in the European Union project and somehow idealist. The ‘Erasmus program’ itself is an exchange scheme that allows university students to study and work in various EU countries. As a result, one of his key pledges was to revive France’s influence in the EU, seeing as how the French have traditionally been perceived as inferior within the ‘Franco-German axis’.

On the other end of the spectrum was Marine Le Pen, leader of the far-right party, National Front (FN). Known for their controversial and hostile policies, particularly on immigration, Le Pen and the National Front were comprehensively beaten by Macron’s centrist party. Despite only being formed in 2016, La République En Marche! strengthened their victory by winning a large majority of 350 seats out of 577 at the National Assembly.

During Sarkozy and Hollande’s presidency, I couldn’t see a significant change in the future of France

Macron and Le Pen’s electoral campaign stood on the backdrop of recent events that have shaped France. Under President Nicolas Sarkozy, the France of 2008 along with the rest of the world faced the sub-primes crisis which occurred due to the decline in the price of US homes. In contrast, his successor, François Hollande, was branded with the slogan ‘a normal president’. Hollande’s presidency faced many difficult and testing times; with France being placed under a state of emergency following the atrocious terrorist attacks on Charlie Hebdo, the Bataclan and Nice. Hollande left his role in office as the unpopular leader of a country not only scared and apathetic, but also waiting for the sparkle that will once again light the famous French “Joie de Vivre” (happiness to live).

Several French students here at the University of Warwick offered their thoughts on previous presidents, the rise of populism and what they believe the future has in store for France.

How did you see the future of France during Sarkozy and Holland’s presidency?

Benedicte Ramon, second-year Politics and International Studies from Paris, stated how: “During Sarkozy and Hollande’s presidency, I couldn’t see a significant change in the future of France. Both belonging to the old French party system, they were embodying values of a traditionalist France. I cannot deny that these two presidents had good ideas and acted significantly to maintain the well-being of France. But they remained anchored in the old traditions.”

Meanwhile, Eoghan Geoghan, a fourth-year International Business student from Saint-Genis-Pouilly, said: “Sarkozy was well respected and did pretty well on the world stage, but was probably not as popular among the French people, and had some suspicious ties with other world leaders, pointing to a conflict of interests between the citizens and actors on the global stage. Hollande on the other hand was a bit of a mockery, and didn’t inspire much among the population. He was quiet, and a bit weak, and seemed to depend on the decisions made by strong leaders like Obama and Merkel instead of speaking with the French people’s best interest in mind.”

When Sarkozy was president I wasn’t really interested in politics

Marine Graimont, also from Paris, is in her first year and is studying Politics and International Studies. She said: “I considered Sarkozy as a kid so I didn’t really follow his actions and policies. When Hollande came to power I thought that social reforms would be enacted and, although he said a lot but did little, I felt that discrimination was less recurrent during his presidency.”

According to Ombline Gs, a first-year Management student from Versailles: “When Sarkozy was president I wasn’t really interested in politics. However, when Hollande came to presidency I felt that nothing would change, that it was all a front plus because of the terrorist attacks I didn’t feel secure.”

Why do you think French people did not grant populist leaders like Melanchon/Marine Le Pen a larger majority?

Julie Deschaud, who is in her first year studying Law and Business, is from Marseille in the south of France and said: “Even though the terrorist attack scared people and maybe pushed some of them into voting for populist parties like the National front, the memory of World War II is still present and the violence and anti-Semitism of those days tends to be linked with these populist party.”

In response, Benedicte stated:“They did not [grant populist leaders a majority party] but they still grant them a significant part. To me, these extremist attitudes reflect a desire for change, a fed-up population that desires innovation and originality. Thus, they did not grant Melenchon/Le Pen a larger majority because they did not fully support all their ideas and values. They were aware of the danger that it could trigger.”

Eoghan provided an alternative reason: “Because populism is too closely linked to personal preferences, and politicians like Melanchon and Marine Le Pen had a strong support base among their followers, but their ideas were too far left and right respectively to answer to the larger population’s concerns.”

To me, these extremist attitudes reflect a desire for change, a fed-up population that desires for innovation and originality

Marine pointed out that: “Because they are extreme and being extreme can sometimes mean not being completely involved in the democracy. They foster blurry ideas that make it hard to understand if they are for or against the latter, their radical ideas can also be scary and prevent people from growing a trust for them. However, I still strongly support the candidate of ‘Les Insoumis’ (far-left) Jean-Luc-Melenchon.”

“I would say that even if a lot of young people voted for Jean-Luc-Melenchon and to a lesser extent for Marine Le Pen too, their manifestos weren’t economically credible and after all they still represent a form of extremism which I believe French people don’t trust,” said first-year Engineering student, Maxime Claron, from Annecy in the east of France.

How do you see France’s future?

Julie stated how: “With Macron, I think France is facing new challenges. I think a lot of changes are going to occur but these would be for the best as France needs to get to know a new organization to optimize its functioning and development.” She went on to say how: “There are also new issues France is going to face like a massive wave of immigration because of the war evolving in southern countries. Especially as I live in Marseille I know this is an issue to consider since a lot of it is illegal which is not helping France’s economy.”

Benedicte thinks: “It’s hard to tell as it has been still recent since Macron is president. It is true that he embodies the figure of innovation and change: first for the creation of his new party, but also for his age and his ambition to change things. I am staying positive when I see Macron’s diplomatic achievements – his visit to China (a huge economic partner for the future) and his efforts to reunite the European Union. However, he remains the result of a French traditional education system. I cannot tell the future of France, but I hope that Macron could change it for a more innovative and ambitious one.”

Macron has reaffirmed France as a global power, characterized by their leader’s youth and ambition

According to Marine: “I think that a sort of fascism and discrimination toward Jews, Islam and black people is growing within the country. Moreover, Marine Le Pen did get through during the last elections and for me, that can only mean that evil will happen.”

Given the unpredictable nature of politics, Ombline says: “Today I am more optimistic with Macron as he has a really good reputation abroad at the contrary to Trump or recently Merkel… He clearly displays a will to change things and finally reduce our debt!”

Eoghan believes: “Macron has reaffirmed France as a global power, characterized by their leader’s youth and ambition. Although there is still a lot to work on, it seems as though he has made some tough choices so far in his mandate that would be beneficial to the larger part of the population. There is still concern over things such as labour laws and the education system, but these things are rarely met with support from everyone.”

Maxim provided the final thoughts: “I don’t really know, I do think that the future looks brighter but I wonder if it is not because of the good vibe around Macron as he is young, clever etcetera…”

Eight months after being elected as the head of the French Republic, Macron’s popularity stood at 42%. This figure exceeds that of François Hollande’s popularity of just 36%, while Nicholas Sarkozy received slightly better at 39%. Already there has been a real evolution in the confidence French citizens have in their leader. His presidency does face the challenges of rebuilding a nation recovering from terrorism and revitalising the EU project. France’s role extends beyond the borders of Europe. In April 2018, Macron was given a three-day state visit to the United States of America, meeting President Donald Trump. The former has demonstrated his commitment to expanding France’s status on the global stage. A country does not change in one year, but to reach any objective one needs a good captain. Whatever comes from all this, it looks like France has found its.