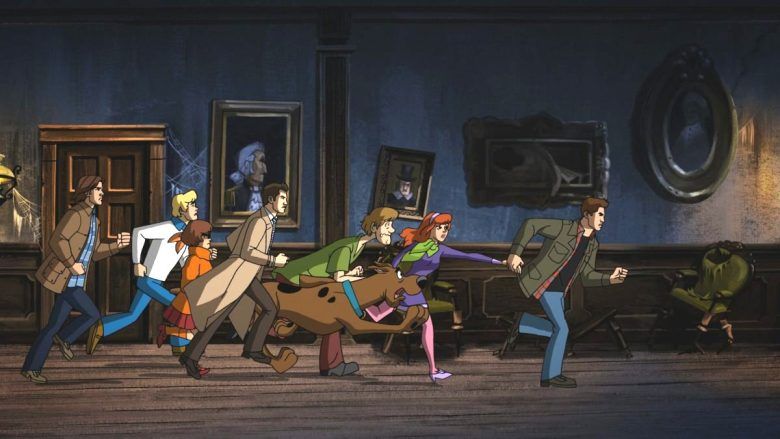 If you frequent the internet, you may have seen a certain meme making the rounds at the moment. It starts with the common idea that Avengers: Infinity War is the most ambitious crossover event in history, before countering it with a comically surprising crossover (such as one between Magnum P.I. and Murder She Wrote). This does lead one to consider what some of the more ambitious, and fun, television crossovers have been. So, here’s my list for some of the most ambitious (and enjoyable) crossovers to have graced the small screen (spoiler alert: Tom Selleck’s moustached PI won’t be making the list).

Buffy The Vampire Slayer / Angel – ‘I Will Remember You’

Angel is the spin-off show to Joss Whedon’s hit supernatural drama Buffy, focusing on the titular vampire with a soul who once dated Buffy. The two shows frequently crossed over with one another, starting from Angel’s very first episode. The ‘Buffyverse’, as this fictional universe has become to be known, laid the groundwork for modern crossover television, particularly another CW fictional universe that may feature on this list later, and because of this is highly deserving of its place on this list. While all the crossover episodes are great, the one that really stands out for money is ‘Pangs’/’I Will Remember You’, which took place early in Angel’s first season (Buffy’s fourth). While ‘Pangs’ is the more forgettable half of the crossover, it led to ‘I Will Remember You’, which saw Buffy visit Angel in LA, and led to the pair rekindling their relationship after Angel becomes human. However, Angel soon realises he needs his vampire abilities to save the world and gives up the possibility of a life of happiness with his one true love by going back in time, so only he remembers the precious time the pair spent together. It’s heart-breaking and works an incredible episode of television all on its own, which any good crossover should.

While every Star Trek show takes place in the same universe, the various shows didn’t actually crossover that much, save for cameo appearances in each show’s premiere. However, when they did, they were some seriously great episodes of television, all of which deserve a place on this list (James Doohan offers a tear-inducing performance as Scotty in an episode of The Next Generation). However, ‘Trials and Tribble-ations’ (the 6th episode of DS9’s 5th season) is the clear standout, and certainly the most ambitious. In the episode, designed for the 30th anniversary of Star Trek, Captain Sisko and his crew travel back in time and find themselves caught up in the events of The Original Series episode ‘The Trouble With Tribbles’. Not only is the episode a hilarious and heartfelt love-letter to the original Star Trek, but the time and effort gone into it is clear. The recreation of the original sets, costumes and props are stunning, and the DS9 crew are effortless melded into scenes from the original episode, including a conversation between Captain’s Sisko and Kirk. The episode is a fitting tribute to the 30 years of Trek it was celebrating.

The most recent crossover on this list, ‘ScoobyNatural’ is the 16th episode of the 13th season of Supernatural. In the episode, Sam, Dean and Castiel are transported into an episode of Scooby Doo, and with the help of the Scooby Gang, try and find a way out. It’s an incredible episode of television, with a smart script that brings the Scoobies into the more mature world of Supernatural without taking away the innocence of the children’s show. I’m not going to drop any major spoilers, but I don’t think we’ll see the Scooby Gang having an existential crisis about the existence of heaven and hell again anytime soon. The animation is excellent as well, and the fact that it took a year to make the episode really pays off. Supernatural is a show known for tackling some wacky, self-aware premises (there was genuinely an episode where Sam and Dean find themselves in an alternate universe where they’re actors in a TV show called ‘Supernatural’), and they handle this one with (angel) grace.

Spanning 4 separate live action shows and 3 animated shows, as well as crossing over with another live-action series (Constantine), the ‘Arrowverse’ is, without a doubt, the most ambitious on-going television crossover. Characters constantly move around from one show to another, helping each other out, causing problems, finding new homes. And then, of course, there are the major crossover events, which have grown to become huge movie-length spectacles. The most recent of these events, ‘Crisis on Earth-X’, spanned 4 hours of television, and featured the entire ‘Arrowverse’ coming together. The event was hugely ambitious, and absolutely brilliant, leaving ramifications for the entire ‘Arrowverse’, as well as the individual shows. Although it’s not yet been released, it feels like ‘Crisis on Earth-X’ could be favourably compared to Avengers: Infinity War. Ambitious? Yes, but that’s easy. Successful? Yes, but a lot of TV is successful. Being both? Now that’s a challenge, and one the ‘Arrowverse’ continually rises to meet during its crossovers.

But what do you think? What crossovers have I missed that you love? Let’s get talking!