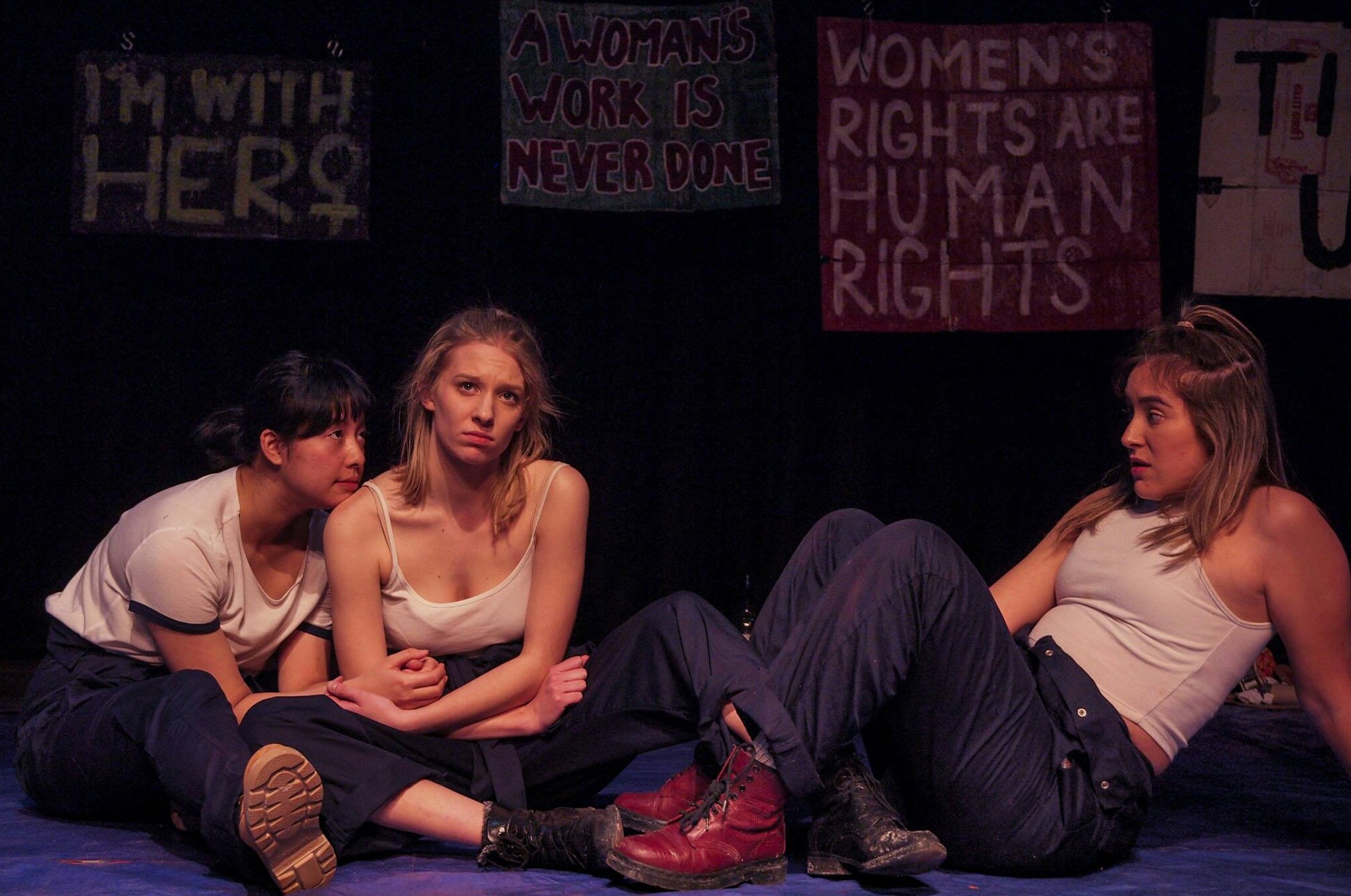 In the centenary anniversary of women receiving the vote in the United Kingdom, the performance of Revolt. She Said. Revolt Again. by Warwick University Drama Society (WUDS) is a political play, providing thought on what it means to be an intersectional feminist in the present day. Revolt is a revolutionary piece of writing about empowering women in today’s society. Whether it be the words they speak or in their actions, the play has to be bold and brash and loud, something which the cast of six did with ease.

From walking into the Goose Nest, placards reading “Still we rise” and “A woman’s work is never done” immediately set the energy for the performance. The play was successful because it didn’t shy away from anything. Eve Allin and Hetty Melrose, producer and director respectively, took the topic of feminism and, with the choreographic assistance of Grace Fox, made it vibrant. The movement sequence at the beginning of the play set this intensity well, with the choices of music throughout the performance setting the rebellious edge.

The discussion of feminism was at the heart of every sentence, even though the word feminism is never mentioned in the performance

The four acts that followed were inspiring. Normally, I don’t ‘get’ theatre that is surreal, or unorthodox. However, Revolt was directed in a clever manner that meant the discussion of feminism was still at the heart of every sentence, even though the word feminism is never mentioned in the performance.

It was clear that every performer thoroughly enjoyed being part of the cast. Highlights for me included the first scene with Francesca Robson and George Brooker: their portrayal of revolutionising a sexual relationship through “making love to you or with you” received some of the biggest laughs of the whole performance. I also enjoyed the scene in the workplace with Lota Chiamaka Ugochukwu and Iga Jazdzejewska, in which revolutionising the workplace was at the heart of the message. While the characters struggled to communicate with each other, Lota and Iga’s relationship with each other shone through. It was clear they understood the character’s motive throughout the scene to convey an authentic workplace relationship.

In a play full of loud moments, the actors singing quietly did the loud speaking for them

The ‘Aisle 7’ scene was particularly impressive. Brooker and Emma Tarcy perfectly acted the male gaze upon female bodies, as masculinised security guards, and their relationship with Veronica Chow’s surreal, feminised character helped evolve the unreality of the play. Chow’s ability to become different characters must be applauded, with her baby voice in the ‘Grace’ scene not even sounding like her at all.

Whilst the first hour can be said to be naturalistic, the play took on a world of its own when the characters revolted. ‘Galvanise’ was the word used to show this change, and it’s fair to say the audience was shocked. All six actors threw themselves into the frenzy, with eggs being cracked on heads, water being thrown everywhere and powder brightening the stage. It made clear that a feminist revolt is spreading everywhere.

The final few moments were haunting, with a song that spoke to how females, or those who identify as female, cannot keep quiet. By singing a capella, it sent a message that a woman’s voice does not need to be backed up. In a play full of loud moments, the actors singing quietly did the loud speaking for them. Combative but thoughtful, it was a fitting end to this impressive production.