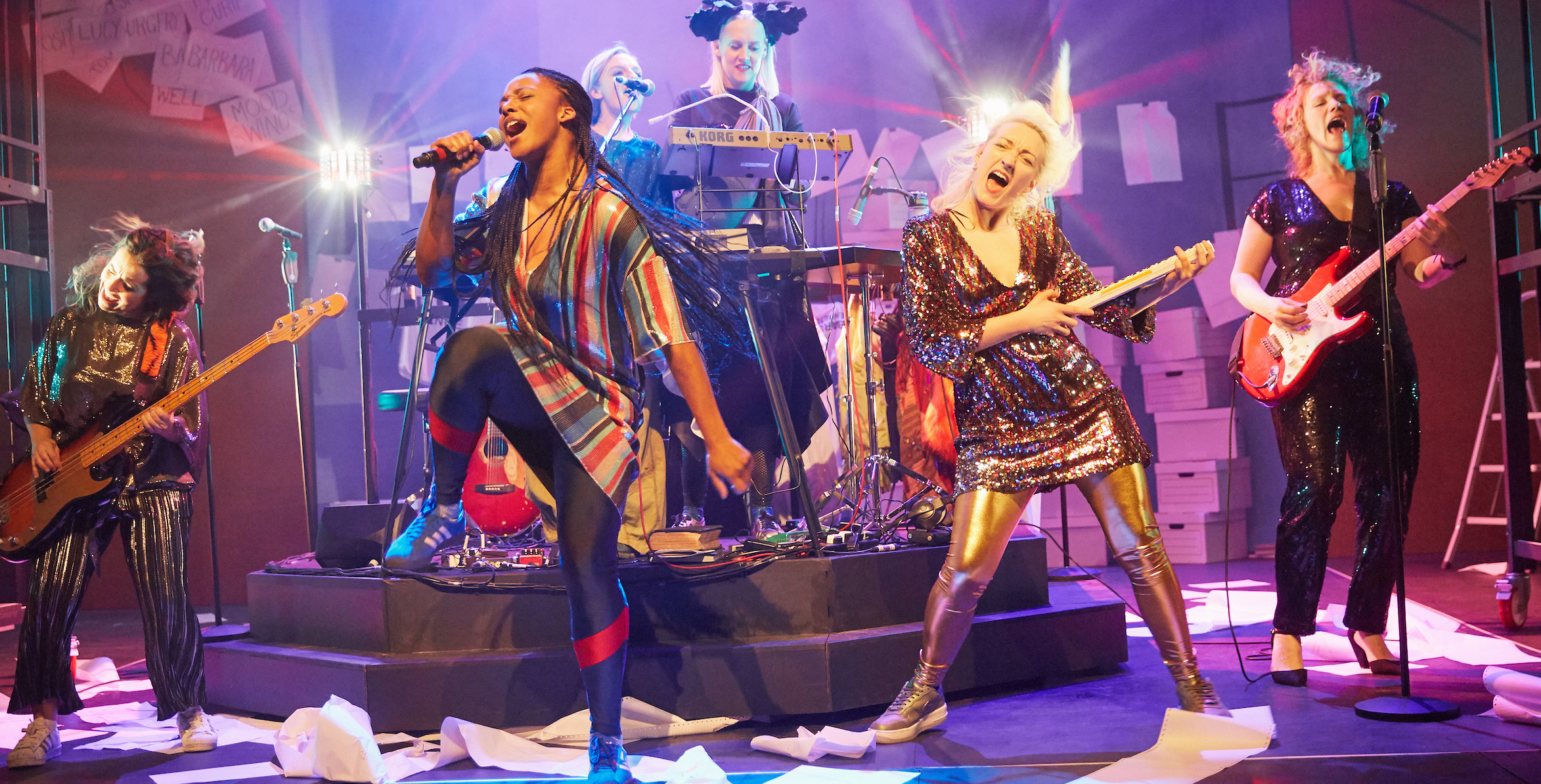 A Pacifist’s Guide to the War on Cancer review: “Emotional, refreshing and honest”

Cancer. The word is a prominent feature on the set of A Pacifist’s Guide to the War on Cancer. It’s the first thing you see when you enter the theatre, and the ultimately, the word that lingers once the show is over. It’s bold, prominent and sets the tone for the show before it has even started. The illness is inescapable throughout the majority of the show. It is an aggressive way to start a play, but it is clear that A Pacifist’s Guide to the War on Cancer, written by Bryony Kimmings and directed by Kirsty Housley, is ready to approach a new way to talk about illness.

Watching the show in the Coventry Belgrade Theatre, I had very few expectations. I was given a chance to interview the director, and had done my research into the reception given by critics, but was still surprised when I walked in to see the set. I spent the first thirty minutes of the show scribbling my thoughts. I made notes on the cast, the set, how I thought the lighting was incredible and the music too loud. The stage felt too close to the audience and I was uncomfortable that I could see the actors in the same way they could see me. I was rushing to make notes to form a coherent review. But halfway through, the show switched, and my notes stopped. This was a play that couldn’t be distracted by my pen and paper, and required my full attention if I were to understand it fully.

In its purest form, it is a play about people who have suffered, having a conversation with an audience

A Pacifist’s Guide to the War on Cancer discusses the writer Bryony Kimmings’ journey to writing the show and understanding cancer. The show relies on sequins and electric music, but alongside Kimmings learning more about cancer and hearing stories of those suffering with the illness, it slowly becomes more grounded in reality. With the introduction of Lara Veitch to the show, a survivor of multiple forms of cancer, who during the course of performance is diagnosed with Li-Fraumeni Syndrome, the whole production shifts. No longer is the focus on the sequins, but rather an onstage discussion of the illness. Towards the end, the conversation shifts to a dialogue with the audience. What makes A Pacifist’s Guide to the War on Cancer so powerful is that in its purest form, it is a play about people who have suffered, having a conversation with an audience.

Including Lara in the performance allows A Pacifist’s Guide to the War on Cancer to feel authentic when discussing cancer. For a large part of the show Bryony and Lara are just talking. Sharing experiences. The audience is witnessing a conversation between friends. A conversation between people who have both experienced fear. The show feels less like devised theatre, and more like a therapy session. The power is the fact that is subverts expectations. It does not gloss over pain and isn’t afraid of talking about unapproachable topics, like the way we see beauty and illness.

The intimacy created by the small stage and the honesty of the actors was alarming at first, but incredibly effective

Lara is not an actor, nor does she claim to be one, and she is what keeps the production grounded in reality, rather than a performance about cancer. The art of conversation seems so distant in modern theatre, we are so used to seeing elaborate spectacles, that the intimacy created by the small stage and the honesty of the actors was alarming at first, but incredibly effective.

However, the production was not always so honest. When talking to director Kirsty Housley, an ex-Theatre and Performance student at Warwick, she explained that the show went underwent a major rewrite. Watching videos of the initial production is starkly different: gone is the large cast and elaborate set, being replaced by a mere six cast members. Kimmings has handed over the director role to Housley and instead chosen to star in the show.

Kirsty Housley highlights how “truthful” the show is and how it is simply Lara and Bryony’s story. When asked about how it was to direct the writer of the production and former director, Housley reinforces the point that this is Bryony’s story. As the narrator, the protagonist and the writer, Bryony Kimmings is a powerful force on stage, but it is clear that there is a well-crafted team behind her.

Cancer is so often discussed in the media that people assume it is a set narrative. A Pacifist’s Guide to the War on Cancer is changing this narrative. Rather than creating a story that tells people how to react to cancer, it gives a cancer patient the opportunity to share her story and gives you the space to react in your own way. Emotional, refreshing and honest, I hope it inspires a new wave of theatre that focuses less on the spectacle and more on truth.