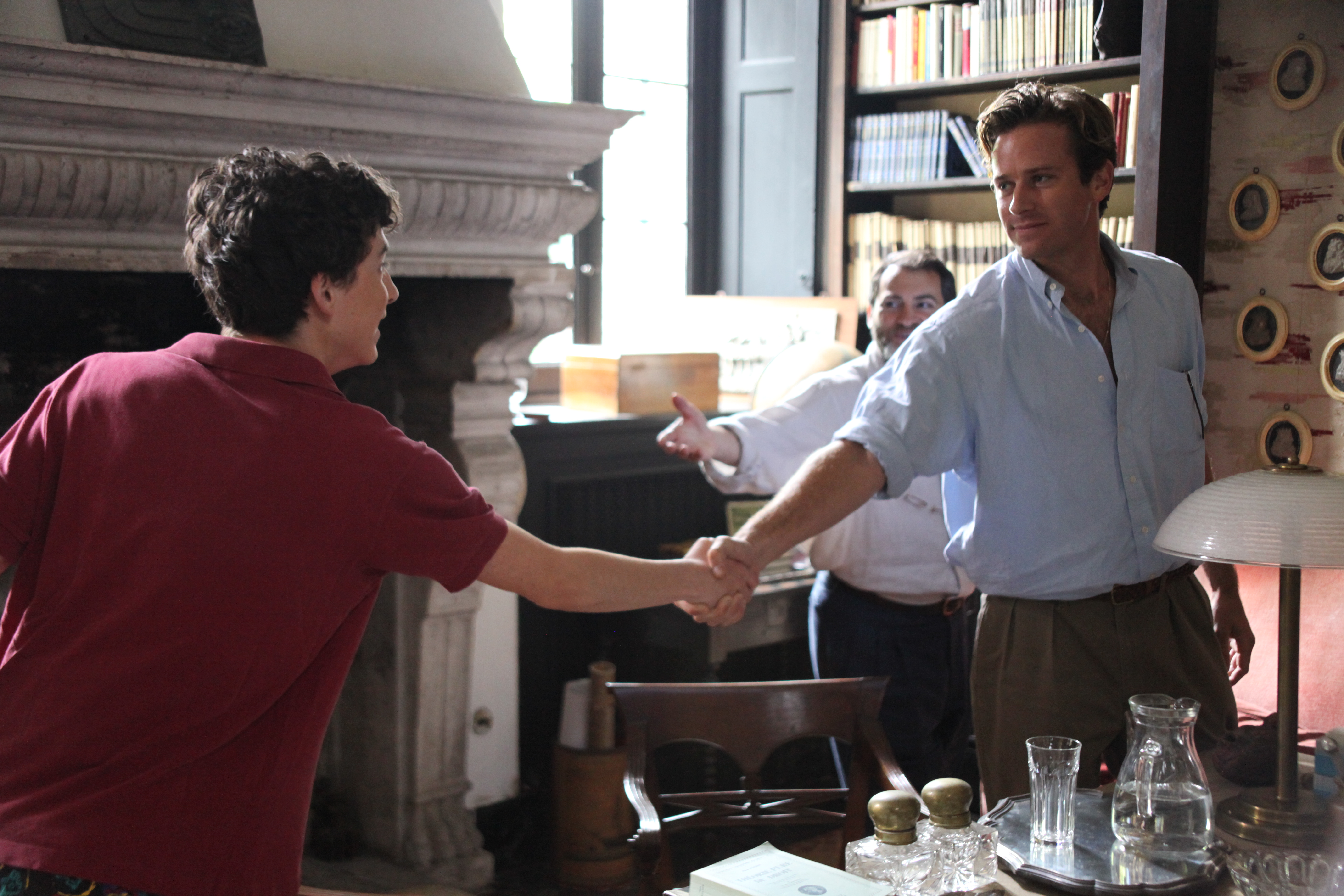 When it comes to hard years, not even a caffeine bedraggled third-year finalist can compete with Hollywood as it wrestles with what might arguably be the biggest identity crisis of its 100-year history. Yet, as the previously hidden corners of the industry have imploded under the abuse scandal and the #timesup movement, aided by the less dramatic yet equally potent campaigns around #oscarssowhite and portrayals of disability, there remains one issue with comparatively little limelight. That issue being the consistent celebration and bestowal of prestigious awards on straight actors playing gay characters in LGBT+ cinema, also known as the ‘gay for pay’ actors or sadly yet-to-trend #oscarssostraight.

Last year, Barry Jenkins’s Moonlight and its subsequent Best Picture win seemed to signal a dramatic change in Hollywood’s attitude towards cinema that might explore the confluent experience of some of the most dispossessed demographics in America. It read like the better half of Breitbart editorial hit-list: ticking boxes for an underprivileged, gay, person of colour character. The awarding of this film over La La Land seemed to imply that cinema tastemakers (and perhaps by extension the wider movie-going public) might finally start to bank on films that didn’t cater to half-hashed, white picket fence conceptions of race, sexuality and gender — not that Hollywood hasn’t pulled similar trickery before — (remember when Thelma & Louise was supposed to signal the dawn of women-led blockbusters that smashed the Bechdel test in the opening scene? Still waiting.)

However at the time there was a hesitant, nagging feeling, despite the success of a film, that I, as a member of LGBT+ community, felt mostly compelled to celebrate- why were the two male leads (and indeed very few members of the cast or crew) themselves not members of the community they were portraying? Clearly when casting Moonlight, whose title is derived from the play In Moonlight Black Boys Look Blue, there was no possibility other than to use actors of appropriate ethnicity; this, in turn, was deeply meaningful for those communities to then see themselves excel on a global platform. Hollywood has a long history of whitewashing roles with white actors but this is a diminishing practice we’re thankfully starting to see called out even at a highly commercial level (see the widespread backlash against the whitewashing of Ghost in the Shell, or Ed Skrein’s decision to step down from Hellboy). So why are we as audiences so willing to accept a comparative process of erasure for another community in an industry that presents us with desperately few chances to act as public figures and role models? Even at this year’s winter Olympics, openly gay athletes have been highly visible begging the question: is the casting-room the new locker-room?

Initially, I fed myself the same narrative I later came to realise we’ve all internalised as an easy explanation: Moonlight is just one film, why not appreciate it for its many merits as a work of art? Surely straight actors can play gay characters and vice versa? #loveislove and #peoplearepeople, right? Remember the two haunting, three-dimensional performances in Brokeback Mountain… but hang on, aren’t both Heath Ledger and Jake Gyllenhaal straight? Or Kate Blanchett and Rooney Mara in Carol. Or Judi Dench in Notes on a Scandal. Or most significantly, Tom Hanks in Philadelphia, Phillip Seymour Hoffman in Capote, Sean Penn in Milk and Charlize Theron in Monster, all of whom have won Best Actor Oscars for playing roles in which their character’s sexuality was an irremovable component to their ‘depth’. The list goes on and is not confined to more modern, fully fleshed out depictions of gay people – straight actors have garnered acclaim for the psychotic, suicidal or obsessive (who said ‘gay’ meant ‘happy’?) characters that used to be our lot of big-screen representation. Take Judith Anderson’s creepy, closeted, and oh-so Oscar-nominated lesbianism in Hitchcock’s 1940 film Rebecca.

In fact, it’s about as difficult to find a prominent actor who hasn’t adorned their CV with a much-coveted LGBT+ role as it is to find an actual gay person in a gay club these days. The oft-employed “love is love” narrative, which historically helped carve a space for the LGBT community in mainstream sexual and public life, has to some extent shrouded the implied inverse and equally true, “gay is gay” or, more specifically, has lead to a relinquishing of control over our own stories. This means that whilst the language surrounding the straight-washing of roles in LGBT+ centred films often focuses on the “courageous”, “challenging” and “transformative” nature of these performances, the inverse is never true for gay actors. No openly gay actor has ever won an Academy Award, although Ian McKellen has famously prepared his speech twice, to no avail.

Why are we as audiences so willing to accept a comparative process of erasure for another community?

The rare times an actor in the LGBT+ community is offered the chance to play a straight role, audiences do not seem as willing to suspend their disbelief as they do in the reverse situation. Rising star and quirky Zoe- Deschanel-esque actress Ellen Page saw her career stunted when she came out as lesbian, whilst coincidently her true-story LGBT+ drama Freeheld was a commercial and critical flop. This year particularly has seen an all-time low in the perception of gay actors, with Kevin Spacey seemingly determined to pin the blame of the accusations levied against him on his repressed sexuality, confirming the homophobic suspicions of a thousand conservative news outlets and dragging the LGBT+ community down with him in his stunning fall from grace.

Gay roles nowadays are increasingly synonymous with characters who are resilient, troubled, layered and many other buzz-word adjectives that would prompt the drool of any LA agent looking for more complex Academy-bait for their clients. Problematically these roles often stress only closeted homosexuality, as once someone is loud and proud they lose that delightfully tormented artistic dynamism for straight investors to cash in on. Enter Call Me By Your Name, which has emerged as the annual flag-bearing ‘Academy gay film’ for this years festival circuit (out of a promising bunch including Gods Own Country, A Fantastic Woman, Beachrats). A visually stunning and artistically high-brow rumination on desire with a sprinkle of Sufjan Stevens for indie credentials, CMBYN is the kind intellectualised representation so many of us have long been craving.

It’s difficult to find a prominent actor who hasn’t adorned their CV with a much-coveted LGBT+ role these days.

Yet CMBYN risks being sucked into the same discourse as Moonlight– which The Paris Review generalised as “everybody’s protest film”. Whilst both straight actors signed non-nudity clauses in their contracts, Armie Hammer himself has already played 2 gay roles which brings the total to roughly 15% of his entire filmography- ironically a higher percentage than the LGBT+ population itself. Unlike in cases of lesbian sexual relationships, which are often lingered over even if they face their own unique challenges in making it to the awards season, the film depicts more graphic heterosexual encounters than it does the principal gay sex scene – which ex-director and screenwriter James Ivory has publically lamented. Those who have spent hours pouring over the films press cycle (guilty!) will also notice the aggressive marketing of Chalamet and Hammer’s highly masculine “bromance”, so that it may bank on the wider marketability of its stars but also possibly convince gay fans that perhaps they might just actually really be…

Alas no. They might sultrily call each other by their own names on-screen, but off-screen they probably end their texts with “cya bro x (no homo!)”. The overall effect of these films is largely one of confusion: how can a film that is so beautiful and well-executed in the cinema seem so downright problematic once the credits roll. Films that excite and are meaningful to gay audiences confirm the value and depth of their own stories past the fun but wafer-thin flamboyance of Ru Paul’s Drag Race then leave them cold when we’re effectively told these stories are in fact so deep, so profound that they can only be told by straight actors! Actors who’ll then be heaped with praise for their bravery, when in reality they’d be pretty brave to turn down such a sure-fire shot at critical acclaim. The Oscars this year do bare a silver lining, however, with a win for the Best Foreign Language film in Sebastián Lelio’s A Fantastic Woman, whose excellence rides largely on the strength of transgender actress Daniela Vega’s performance. Hopefully, the U.S’s own movie-making behemoth can take notes and start awarding LGBT+ talent as well as stories, as for once, it shouldn’t really be up to the consumers to deny ourselves what little is available.