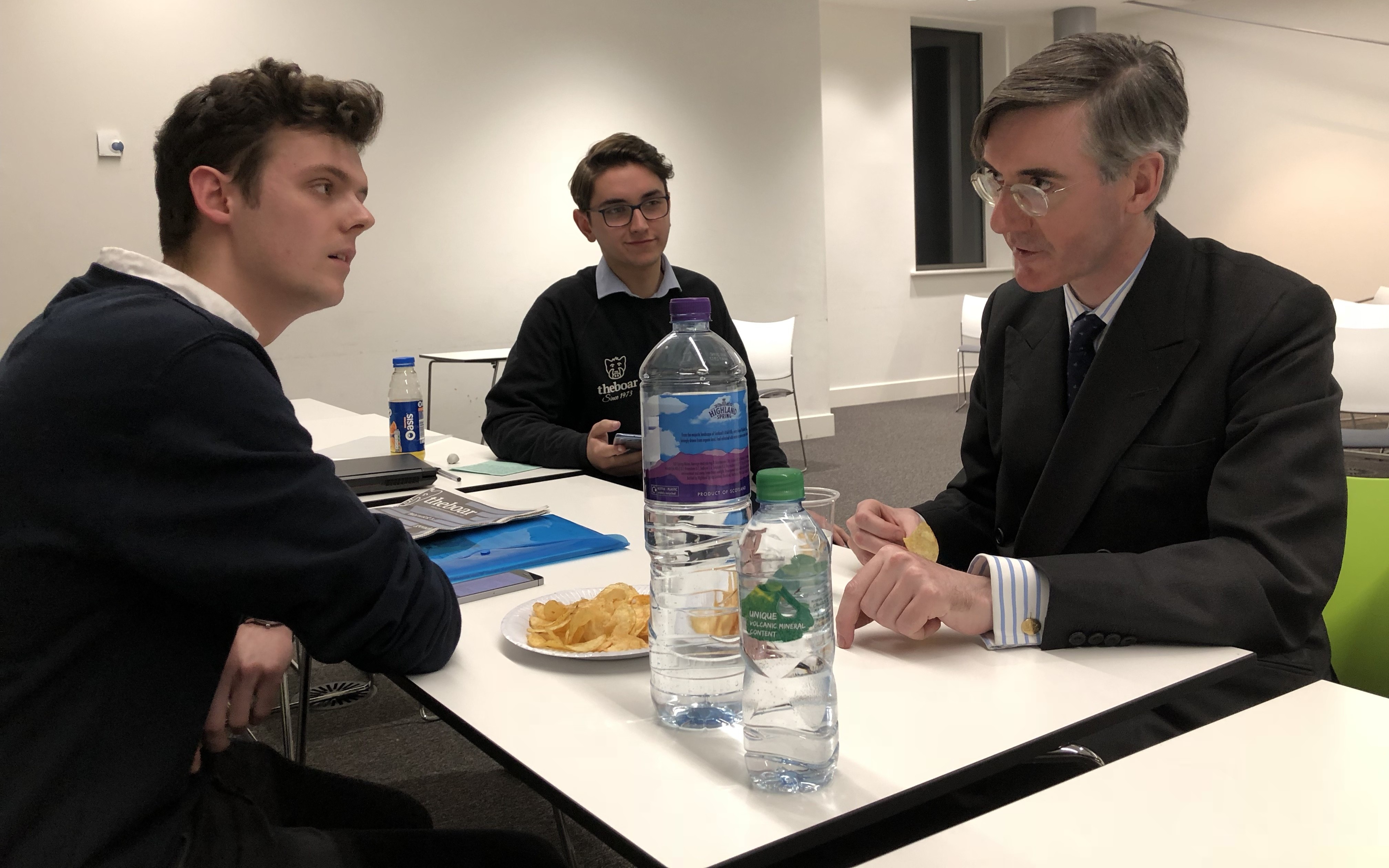 Jacob Rees-Mogg, the Conservative Member of Parliament for North East Somerset and Chair of the European Research Committee (ERC), spoke to Warwick students on Monday 9 March.

In an event hosted by Warwick PPE society, Mr Rees-Mogg set out his vision of post-Brexit Britain, while in a second talk to the University of Warwick Conservative Association, he discussed the British constitution. A heavy security detail was present, with both events ticketed and student IDs checked before entry.

Warwick Pride and Warwick Liberation and Diversity Exec co-hosted a ‘Kiss-In’ outside of the event to “remind him that we are here, we are queer and we’re not going away.” Participants waved rainbow flags and offered glitter to those queuing for the talk, as well as holding a sign saying “Homophobia and Misogyny this way”.

Members of the University and College Union (UCU) were also present outside and presented Mr Rees-Mogg with a leaflet concerning the ongoing strike, which he accepted.

Between the two talks, The Boar spoke to Rees-Mogg to probe him on topics including gay marriage, tuition fees and the ongoing UCU strikes.

An Interview with Jacob Rees-Mogg

Elliot Mulligan (The Boar): Why have you come here when it’s possible that most of your views are out of line with what most students think?

Jacob Rees-Mogg: Well I have no idea what most students on campus think, I haven’t done an opinion poll, and I was invited by two groups to come and speak, so I thought it would be interesting to come. I came here during the referendum campaign and I’m very pleased to have come back.

I saw you with the protesters outside. They were hosting a ‘kiss-in’ and they stated on their Facebook page that you don’t stand for Warwick values of respect and embracing diversity. What do you think about that and how does that make you feel?

Well there was a small protest of about four people who I spoke to, and the hall was full with what, two hundred people in it? So it seems to me that more people wanted to come and hear and engage and discuss than people who wanted to protest. I had a chat to them and they’ve got a point of view which they’re completely entitled to put forward, that’s part of freedom of speech.

So the large majority of it is because of your views on abortion and gay marriage. You said in your speech earlier that it’s important for everyone to question their views. Do you ever question your views?

I think all politicians question their views, yes.

Any changes in the past?

Well I think that views develop and evolve, and you need different political answers to particular situations so inevitably things change. The economic policy of Nigel Lawson would not necessarily be the right economic policy now, monetary targeting in the 1980s for example didn’t work and so you’ve got to be flexible and ready to change and see what does and doesn’t work.

If we bring it back to campus, what do you think of the state of higher education at the moment?

A very broad question. Well I think UK universities do extraordinarily well in international comparisons, we have some of the best universities in the world for a country of relatively limited population. We seem to do much better than you would expect proportionately.

So you’ll be aware that there’s the UCU strikes currently going on on campus, and that means that they’re striking all of next week. Some students won’t have any contact hours at all. You referred to students as consumers in your speech, do you think students have a right to ask for money back for missed contact hours?

Yes of course they do, yes.

Okay, and what do you think of the strike, are lecturers valid in striking?

Well, yes, I think people are entitled to withdraw their labour, whether they’re right to is dependent on the circumstance. I think almost everybody has had to have their pension situation changed in recent years because of increased life expectancy, and one of the big changes since the state pension post-war came in, and the pension age for men was set at 65, is that at that point I think life expectancy from birth was 68. Now, it’s about 80.

You’ve had a fundamental change in expectancy but even more importantly is the quality of life that people are having in retirement, so people are healthier and they are living longer which is a wonderful thing and is a fantastic achievement of the advance of humanity.

But it’s very expensive in terms of pensions and therefore police pensions, local government pensions have all been adjusted. Not for people who are already in receipt of pensions but for people who are going to retire at a later stage and that is simply the reality of increasing life expectancy and the limited resources that are available to pay for pensions.

I had a chat to them and they’ve got a point of view which they’re completely entitled to put that’s part of freedom of speech.

Moving on to tuition fees, the word you used in your speech was ‘tweaks’, can you elaborate on what tweaks you think should be made to the system?

Well the obvious one I think is that the interest rate is probably too high, though the interest rate doesn’t fall fully on that many people, it only falls on you when you’re on over £45,000 a year of income and it’s phased until that stage, and people on below £25,000 don’t pay an interest rate at all. So that’s where there are issues, when people leave university.

We had events on campus yesterday for International Women’s Day, did you do anything special for it?

Well there was a debate in the House of Commons so I watched that, but from my office. Not in the chamber. I didn’t contribute to the debate as I thought it was more a debate for women to speak in than for men, though some men did speak in it.

Well I think they’ve basically got to be economic, and look at the assets held by Russians in London, particularly ones who are known to be close to Putin.

But we’ve already implemented economic sanctions, and it appears from an outside perspective they don’t seem to be working.

Well we must do more. We’ve got to take this very seriously, we can’t just lie back and accept that people will be murdered in English cities.

Well, I don’t think we want to go to war with Russia if that’s what you’re asking me. But, we also need to talk to the Americans, they have more clout in this. I’m not sure that expelling a few diplomats will do any good. It’s not easy to work out precisely what the response should be, but probably the most damaging to Russia is some kind of economic penalty.

I wouldn’t view myself as the poster boy of Conservatism.

Basically you’re everywhere at the moment. You’ve been on Week in Westminster, you were on Nick Robinson’s podcast last week and you’re going on Robert Peston this Sunday. Why do you think people have chosen you to be the current face of the Conservative party?

Well I don’t know, people ask me to do things and things come together, and you think I’m doing three things within a week, but Peston has been in my diary for about six months because usually at weekends I’m in Somerset. If I’m in Somerset, I’m not going to do Peston because it means changing one’s whole weekend just to be on telly for five minutes and that doesn’t seem very sensible.

And so this weekend I’m staying with my mother-in-law in Kent, and Kent to London is an hour’s journey, it’s not too difficult and that’s why I’m doing it this weekend. I’m booked in to do the Andrew Marr show on the Saturday of the first Lords’ test as I know I will be in London for that, for the Sunday sorry, for the Sunday of the first Lords’ test. So I can do it without completely ruining my weekend for a couple of minutes with Andrew Marr, and so these things just come together. It’s much coincidence as anything else, I wouldn’t view myself as the poster boy of Conservatism.

Some people would think so with the t-shirt. (A student present at the earlier talk was wearing a Rees-Mogg t-shirt)

Ah the t-shirt. I think the t-shirt is an amusing tease and not to be taken too seriously.

So to put it bluntly, it must be a lot of effort going around the country doing interviews. What would you say drives you?

To go back to your first question of why I’m here, I’m here because I think it’s important a Conservative message is put out in universities. I think to some extent at the last election the Conservatives left the field open to the Labour party, the Labour party was talking to students and the Conservative party wasn’t. I am making my small effort to adjust that. I’m not alone in that, Sam Gyimah is doing a lot of speaking at universities, and there is an important effort to ensure we are engaging with all generations rather than just assuming as people get older they become more conservative.

So is that what drives you? A will to make young people hear the Conservative message?

Well I believe in the Conservative message and I want to get that message across. It’s important to do that and one of the ways of doing it is public meetings. I can’t do enough to make a fundamental difference but I’m doing a few and if other people are doing the same we can persuade some people of the virtues of conservatism.