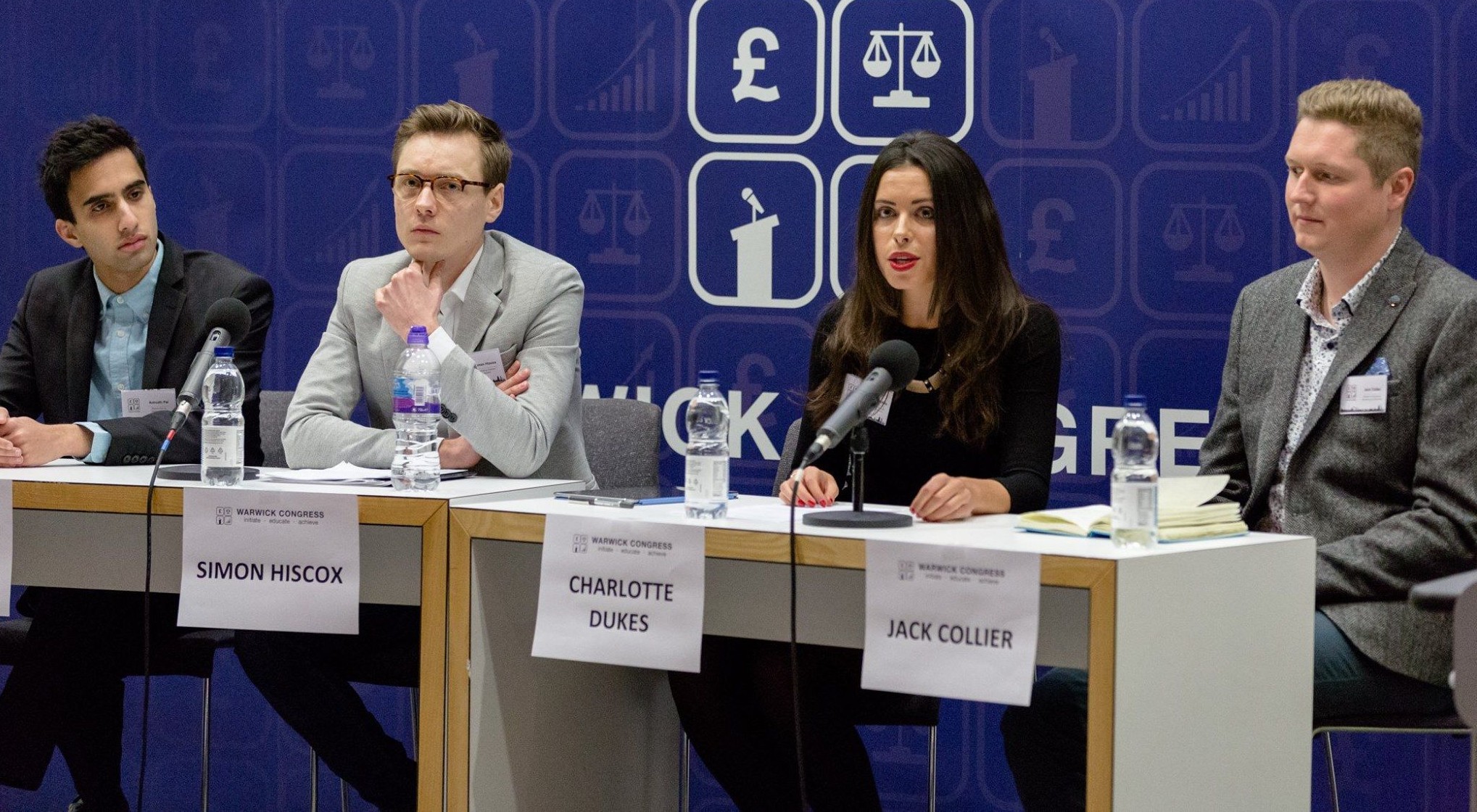 The second panel debate of the conference was on the hot topic of “fintech” (financial technology). The panellists were Jack Collier, director of European marketing at Circle Pay, Simon Hiscox, marketing director at Seedrs and Anirudh Pai, researcher at General Crypto. Chairing the panel was Charlotte Dukes, a final-year Philosophy, Politics and Economics student at Warwick, who is also a freelance content creator in the space of cryptocurrencies.

Circle Pay is a peer-to-peer payments technology company, which allows transfers of fiat currency (traditional currencies) between users. It was the first company to receive a ‘BitLicense’ from the New York State Department of Financial Services and also the first one to receive a virtual currency license from the British government. Seedrs is a London-based equity crowdfunding platform for investing in start-ups throughout Europe. The firm also operates in the fintech industry. General Crypto is a US-based hedge fund investing in digital assets.

The panellists first gave an overview of the industry and how blockchain technology changed financial services and what its effect is in terms of how we relate to money. Collier kicked off the panel explaining how recent developments in blockchain technology brought uncertainty for banks and regulators alike, arguing that there is a revolution underway in the financial industry. He drew parallels to the ways in which Uber changed the taxi industry and Spotify the music industry to explain the changes going on in the financial sector at the moment.

Cash is dying. In Sweden, for example, only 2% of transactions are in cash.

He also explained that are changing rapidly, saying: “Cash is dying. In Sweden, for example, only 2% of transactions are in cash.” He also pointed out that consumers are losing trust in traditional industries, such as banks. The other panellists echoed Collier’s views, with Hiscox adding: “Fintech and the modern customer are innately tied together.” He also explained that after the 2007/8 financial crisis, the “perfect storm” was created to make room for new developments such as cryptocurrencies, as trust in traditional financial institutions such as banks fell drastically.

Pai also highlighted the increasing importance of technology nowadays, stating: “Software is leading the world.” He also argued that because cryptocurrencies function in a decentralised way, meaning that banks and other such institutions acting as ‘middle-men’ would no longer be necessary, financial systems could become much more effective. He also remarked that companies such as Facebook and Google, that own 80% of the advertising market share, “know more about you than you know about yourself.”

The panellists then looked at the question of whether they view themselves as being in competition with existing firms and companies in the market or whether they see themselves as replacements. The panellists agreed that, at least for the moment, they work together in the industry, but that in the future existing market players could be at a real risk. Pai also remarked that “the future is already here, it’s just unevenly distributed”, arguing for example that there is a time lag between new technologies coming to the US compared to Europe.

The issue of protectionism on governments’ part came up, as cryptocurrencies could potentially reduce or even eliminate the role of governments in influencing financial activity and monetary policy in the economy. There consensus was that there is a need for governments to develop legislation and regulations for cyptocurrencies, as this is an issue that can no longer be ignored.

Lastly, the issue of education was addressed, in particular the question who is responsible for educating the public about fintech and cryptocurrencies. Collier argued that it is “everyone’s responsibility”: governments, the industry, the media and us as individuals all share this duty.

Warwick Congress: Reflecting on the Financial crisis of 2008