The University and College Union (UCU) and Universities UK (UUK) have agreed a revised benefit reform proposal for pensions. Warwick’s UCU branch have stated that they will be opposing the deal.

The revised benefit reform proposal is still subject to consultation by both parties and subsequent agreement at the USS Joint Negotiating Committee.

The Warwick branch of the UCU have stated on Twitter: “Dear All, the details of the proposed deal are DEFINITELY not our branch policy. Rest assured, we’ll DEFINITELY be putting our opposition to the deal to the union’s leadership!”

Dear All, the details of the proposed deal are DEFINITELY not our branch policy. Rest assured, we’ll DEFINITELY be putting our opposition to the deal to the union’s leadership!

That was about as diplomatically as we were capable of putting that. pic.twitter.com/peUmOvuSCC

The UCU’s Higher Education Committee and branch representatives will meet tomorrow. Following that meeting, UUK “expect that UCU will suspend industrial action from and including Wednesday 14 March”.

If strike action is suspended, the suspension will remain in place while a Universities Superannuation Scheme (USS) Joint Negotiating Committee takes place.

The move comes after talks over the USS reforms, overseen by the government’s Advisory, Conciliation and Arbitration Service (ACAS) concluded today.

Warwick UCU have defined their position on the proposed changes via Facebook this evening, having agreed on several points “almost unanimously” in a branch meeting earlier today. They have described the content of the agreement as “a massive concession” in the UCU’s stance as changes would “only tenuously maintain a defined benefit pension, under very unfavourable conditions”.

Under the third point of their outlined position, Warwick UCU has resolved to continue the present strike programme and potentially escalate industrial action if no settlement is reached. The branch will be holding an emergency all members meeting in the Arts Centre tomorrow morning to continue discussions.

As there will be further national talks and strike action tomorrow, Warwick UCU added that “it is as important as ever that we keep up our action to show our strength of feelings around not giving up on this dispute yet”.

This evening Warwick UCU also shared a link on Twitter to a petition entitled “Open letter rejecting the UCU/UUK agreement at ACAS”. The letter began:

Call on the UCU national leadership to reconsider its position reached in ACAS negotiations with UUK on the 12th March 2018.”

The letter proceeds to describe the current transitional benefit arrangement as “kick[ing] a serious solution to the pension agreement into the long grass… at the very moment we are strongest and able to force a more decisive victory”.

The agreement is further described as “bogus” in the letter, also detailing that the discussions today have resulted in employer contribution rising by “only 1.3%”.

The letter concludes: “In three years time we will be demobilised and pressured to accept a worse deal. In our opinion we should keep going and throw UUK’s offer out all together”.

Other branches of the UCU including UCL, Cambridge, Oxford and Leeds have also shared their discontent in the Twittersphere, UCL-UCU describing the offer as “hugely detrimental”.

Previously, the UCU had announced another set of 14-day strikes set to take place during exam season.

You can read the full statement on the agreement here.

This article will be updated as the story develops. 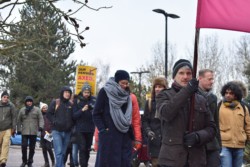