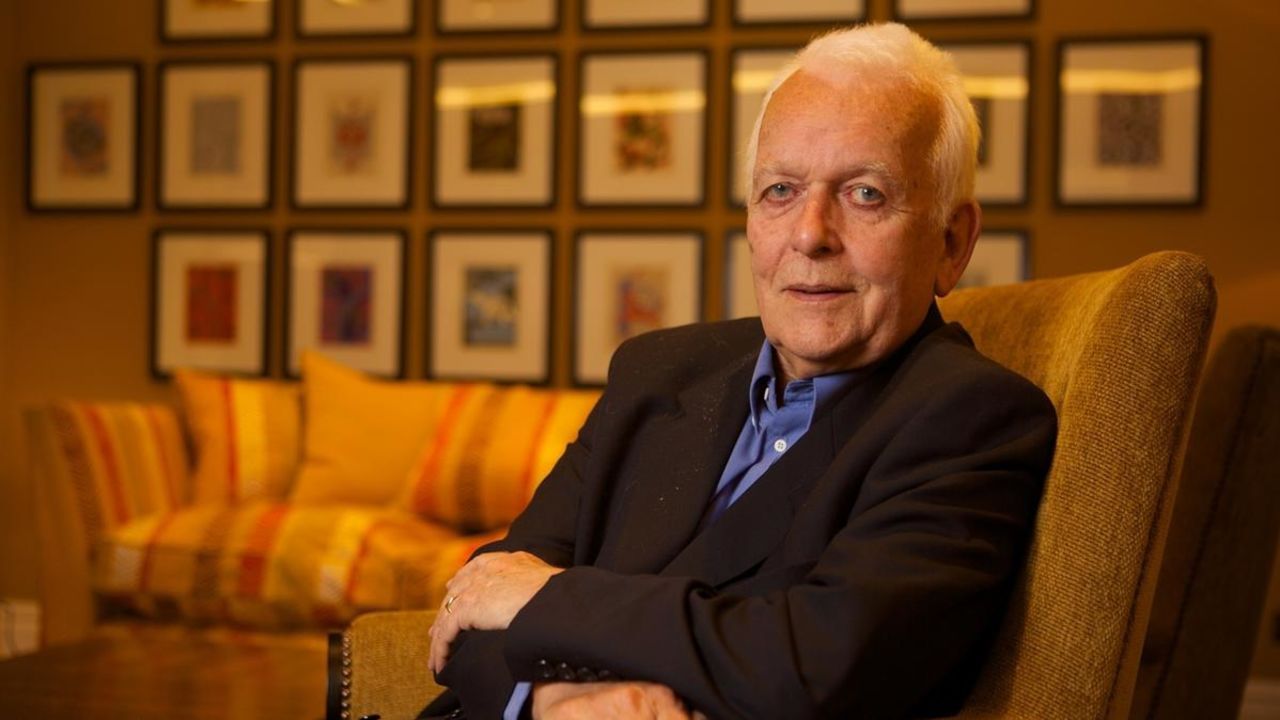 An interview with Andrew Davies

As British television’s foremost dramatist, Andrew Davies seems quite content to let the world come to him. Sitting across from me in the spacious office of his Kenilworth home, the screenwriter of such hits as the BBC adaptations of House of Cards, Pride and Prejudice and War and Peace has all the outward characteristics of a man entirely comfortable with his own success. He is forthcoming with his memories, generous with his time and frequently delighted by his merited and ultimately affectionate reputation for ‘sexing-up’ the classics with characteristic gusto.

Davies began his career as an English professor, culminating in a 17-year tenure at the University of Warwick. His time at the university served to inspire his first great success as a screenwriter, 1986’s campus-based comedy A Very Peculiar Practice. Davies’ colleagues were understandably suspicious: “Oh yeah, they were very curious and of course assumed that it was all about Warwick, which wasn’t entirely the case. A lot of it was inspired by Warwick University, but there were also various other universities that I’d been to.” Davies had intended to film the series at Warwick but the management thought otherwise: “I remember it was the registrar of the university that was quite suspicious of us- he didn’t like the idea of it being done at Warwick. We did film one episode at the Warwick swimming pool because it was hard to find big swimming pools anywhere, but we filmed it mostly at Birmingham and Keele. Birmingham was so secure in their reputation that they didn’t mind a bit of satire being filmed there, and Keele was so desperate for the money that they didn’t care!”

Davies left the university in 1987 between writing the first and second series of A Very Peculiar Practice. “I felt a lot freer once I was away from the university, although I don’t think it was because of that that I left. It was more to do with my having reached my fiftieth birthday, and I thought, ‘Well what are you, a teacher or a writer? Make your mind up!’ And it had been increasingly difficult to juggle the two things. People would say ‘can you come over to L.A for a week?’ And I’d say, ‘well, no, I’ve got to do these lectures!’” Davies took the plunge, though he quickly came to miss the positive influence of university life upon falling into his first and only bout of writer’s block. “It started when all the students started again in October, and I’d been used to the stimulus of bouncing my ideas off my students and colleagues. I just thought, ‘Oh God, I can’t think of anything!’”

With the aid of alcohol and diligence, the writer’s block soon passed, allowing Davies to achieve massive acclaim and an Emmy for Oustanding Writing for 1990’s House of Cards. I ask him whether he feels that Margaret Thatcher’s unexpected ousting played a role in the show’s unprecedented success. “We were hugely lucky with that. At that time, it seemed like she was going to go on forever. It was only insiders in the Tory party who knew her position wasn’t as strong as it looked, and they were all trying to get rid of her.” I remind him of the first episode’s audacious pre-title sequence, in which Ian Richardson’s Francis Urquhart announces Thatcher’s downfall to the audience. “I thought ‘well, let’s make it clear, let’s have Urquhart putting her photograph in the draw.’ The terrific piece of luck we had was that the first episode went out, and then on the Wednesday before the second episode went out, she was gone! Everybody thought either we caused it or we were on the inside and we knew about it, but really it was luck. Luck and Michael Dobbs’ deskwork.”

The mention of Lord Dobbs, author of the original House of Cards novels, raises the subject of the radical changes Davies made to Dobbs’ material – notably the ending, in which the guilt-stricken Urquhart commits suicide after being reminded of his crimes by Mattie Storin, the young, female journalist pursuing him. “I think I’d made him a bit nastier and tougher than he was in the book, and I just thought ‘this guy is never going to kill himself – he’ll throw her off the roof, even though he loves her.’ And of course, in the book he didn’t love her.” Davies alludes to another major alteration to the original text, that being the insertion of an affair between Urquhart and Storin. “I thought, ‘She’s the main female character apart from his wife and, you know, sex with his wife isn’t going to be very interesting,’ but this sexual relationship, I mean, he’s old enough to be her father, if not her grandfather, and I thought, ‘that sounds very transgressive. It’s disgusting, but let’s go for it – and she could call him daddy when they’re doing it!’ So that’s what we did. And the first actress we cast to play Mattie refused to call him daddy – so she didn’t last! We replaced her. She thought we were going to change the words, but in fact we changed the actress!” Davies laughs at the thought of his own devilishness.

While House of Cards brought him great recognition, it was the phenomenon that was 1995’s Pride and Prejudice which made Davies a household name: “It changed my life really; changed my career. It made me famous, in a modest sort of way. Nobody had really ever heard of me before Pride and Prejudice, and now people do know my name, and it’s all to do with the success of that show.” I ask him why that particular series so succeeded in capturing the public’s imagination. “Largely due to Colin Firth and Jennifer Ehle I expect. People just love them, especially Colin I think – all the middle-aged woman, and a lot of young ones too, just fell for him!” I’m reminded of the famous swimming scene, in which a young Firth saunters toward Ehle in a dripping-wet shirt. I suggest that it was the introduction of sexuality to the original text – a trademark of Davies’ period adaptations – that helped to revolutionize the modern costume-drama. “Well, Jane Austen had always been done as rather staid social comedy. Sue Birtwhistle, who produced it, and I were saying that ‘this book is really all about sex and money – the driving engine of the plot is Darcy’s desire for Elizabeth and the snag is that she’s unsuitable,’ so it’s like the selfish gene is triumphing in that his desire won’t be denied. He’s supposed to get married to his sickly, inbred relative so that the family’s fortunes may be kept together, but instead he falls for this very, very lively young women, who nature tells us – as it were, or that’s what I thought – is going to revive the Darcy genetic bank.”

In spite of Davies’ massive success and prolificacy, he is by no means invulnerable to harsh criticism. I remind him of a minor incident at the Cheltenham Literary Festival two years ago, in which an audience member rather vociferously accused him of plundering the classics. “There is often one guy in the audience, it’s always a man, and he’s saying, ‘You’ve spoilt my experience of the classics by putting your own interpretation on them.’ And I’ll say, ‘The book is still there, I haven’t destroyed it. You can still read the book and make your own adaptation of it in your head, and if you feel overwhelmed by my adaptation, it must be that you’ve got a rather weak ability to imagine things.’” I ask him to consider whether there’s any piece of literature that he simply wouldn’t dare adapt. “I’d be very wary of adapting Virginia Woolf, I think. I mean, the thing about Virginia Woolf is that the stories aren’t strong enough. It’s not about story, it’s more about the way she writes and the way she interprets life. I suppose you could make a very wispy, impressionistic film of Virginia Woolf that might be true to the thing, but it would be very ‘art-housey’ and would have to be much more about how it was shot and finding a visual parallel to the way she writes. Might be very interesting to do it, but not to me. I’d think: I’m not the man for this.”

At the age of 81, Davies shows no signs of slowing down in any capacity. I ask him what he’s currently adapting, and he slams a large paperback down on the table in front of me. “A Suitable Boy – Vikram Seth. Look at the size of it! Fifteen-hundred pages! But it’s an absolute pleasure to work on because it’s got great characters and it’s beautifully written. It’s a bit like War and Peace except there’s no war- just a few riots, that’s all. But its families, you know? Which boy is the heroine going to finish up with? Very Jane Austen sort of stuff, except its set in India in the fifties.” Also on the horizon is his much-anticipated, six-part Les Misérables for the BBC. He appears determined to differentiate his personal rendition from previous adaptations. “It’s very different from the musical because there’s a whole lot more story in it. I mean, there’s a whole wodge of stuff that happens before the musical ever gets started, which is Fantine’s story as a young girl and Jean Valjean’s early days, and I’ve done a different interpretation of the battle between Valjean and Javert than I think anybody else has ever done before.”

I ask him to consider whether he believes in such a thing as retirement for a screenwriter. “I think, when you’ve been doing it for a long time, you wouldn’t know what to do. You wouldn’t know how to fill your day. But I still very much enjoy it, and I think that what a lot of people don’t realise is that writing for television is extremely sociable.” He mentions that the Les Misérables production team will be visiting him tomorrow for a meeting regarding minor changes to the script. “Why will we have a meeting here? Because they just like coming up, and they get fed up with their own offices; so we have a meeting here, then we go and have lunch up the road. And you know, that’s regular – not necessarily every week, but often every couple of weeks. Not many 81-year-olds get to mix with very bright people in their twenties, thirties and forties who are my colleagues on a project, so it’s a very enjoyable life I find.”