WAC march on Unitemps offices in response to “strikebreaking practices”

Unitemps is a temporary employment agency that was originally created by the University of Warwick, and which now has various franchises across many higher education institutions across the UK.

Disputes arose last week however, after the Salford agency started to advertise their services to the University, in order to maintain lectures and classes that are normally taught by striking lecturers and academics.

In an email leaked from Unitemps Salford branch, the employment agency states: “Here at Unitemps, we have been made aware of the upcoming strike action and wanted to make sure that all of our key stakeholders within the University are aware that we are able to support with any extra staffing requirements during this time.”

“We have a large pool of reliable students/graduates who have experience working within various different parts of the University who would be happy to cover any work necessary.”

In response to such actions, Warwick Anti-Casualisation teamed up with Warwick For Free Education to visit Unitemps head office near Canon Park and deliver an open letter condoning the actions of the Salford office.

In a Facebook post, Warwick Anti-Casualisation stated that the strike-breaking behaviour by Unitemps “is not only despicable: it is illegal”.

Warwick Anti-Casualisation have also released a public statement calling on the employment agency to “immediately provide full transparency regarding whether other branches have undertaken similar strike-breaking measures”.

The public statement also states that Unitemps should “recognise unions in all institutions where it operates and grant equal collective bargaining and strike participation rights to all workers engaged through Unitemps”.

Industrial Strike action by academics and lecturers across the country began last week, in response to the proposed changes to the Universities Superannuation Scheme (USS), which would directly affect the pensions of academic staff.

In response to the actions of the Salford branch, Unitemps released a statement which stated that the email sent to Salford University was a “human error” conducted by only one of their franchise agencies.

“This was an internal email sent within a Unitemps franchise to contacts within a single institution regarding temporary staffing during a time of strike action. Unitemps took immediate steps to deal with this issue as soon as they were made aware of that email.

“This was a human error by an individual and it does not reflect the actual position of Unitemps nor that of the individual institutions within the network.” 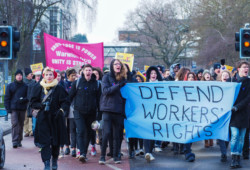