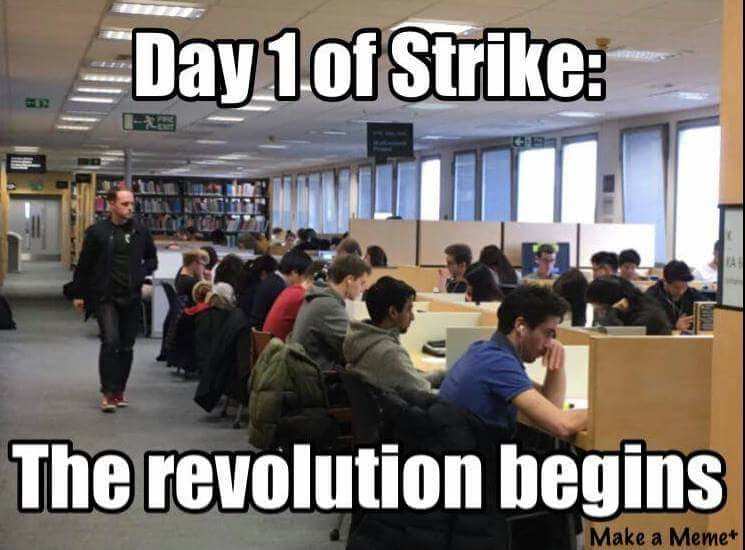 Controversy is developing about Warwick SU’s decision to ban a student from a Freshers’ Facebook group for posting memes implying that students were apathetic about the UCU strikes.

In his post, he noted that his friend, Griffin Tory, also a second-year PPE student, had been banned from the group for posting a meme critical of ongoing strikes.

The original meme was a picture of the library, with students busily and quietly getting on with work – apparently unconcerned by picketing outside. The image was captioned: “Day 1 of strikes: the revolution begins.”

Westgarth included screenshots of private conversations he’d had with the moderator of the Warwick SU-run freshers’ page.

In the screenshots, the page’s moderator said: “The SU overwhelmingly voted to support lecturers, tutors, and seminar leaders… in their fight for fair pensions, so I’m not entirely convinced that your repeated posting of this item was very helpful.”

If you want to post things like this, then the Warwick Memes page is a more appropriate outlet

In response to this, Griffin Tory said: “I profoundly disagree with your decision to ban me.”

“[The image] was taken down with no clear reason given after it had received popularity.”

In screenshots posted in the comments section, the moderator of the page responds that the meme “essentially came across as a sarcastic post mocking the strike and is just not appropriate at this time, nor particularly helpful.”

“I regularly check the page and also get notifications when people flag up content deemed inappropriate”.

The member of Warwick SU staff then pointed out that the ‘University of Warwick Freshers 2017-18’ site is an official page run by the Students’ Union.

The moderator went on to say: “If you want to post things like this, then the Warwick Memes page is a more appropriate outlet.”

One commenter wrote: “This is prohibition of free speech, which is entirely unjustified given that the meme is pretty inoffensive. You can’t prevent people from being expressive when their opinion isn’t offending anyone.”

‘University of Warwick Freshers 2017-18’ is an official Warwick SU-run page. Students typically use it to advertise events on campus, find lost property, and exchange tickets for clubs. All posts have to be directly moderated by a representative of the SU. The SU said that memes were not deemed appropriate content for the page.

The group is heavily moderated by SU staff in response to the growing number of ‘unofficial’ Freshers pages that have arisen over the last five years, which have seen numerous instances of students being scammed with regards to SU events tickets.

All members of the page are individually approved upon requesting to join the group. Westgarth post raising the grievance was subsequently posted in one such unofficial Freshers group.

Warwick SU, have since responded that the block against Griffin Tory has been removed, and thus he is can re-submit a request to join the page.

This was then followed by the comment: “Please note, though, that any repeat posts of this type will be removed”.

SU President Hope Worsdale told The Boar: “All posts in social media groups are subject to moderation as a matter of course. Given the content and timing of this post – together with the mixed reaction to it within the group – it was deemed inappropriate when students and staff are striking to protect their pensions, and was removed.

“The SU’s position on this issue was also determined by student vote in the recent referendum. We acknowledge however that some students have been frustrated by this incident and we will review our approach going forward.”

When approached for comment, Griffin Tory told The Boar that his “opinion on the strike is still being formed”.  He also stated that his “disagreement with the SU was over the principle of free speech and not the validity of the strike”.