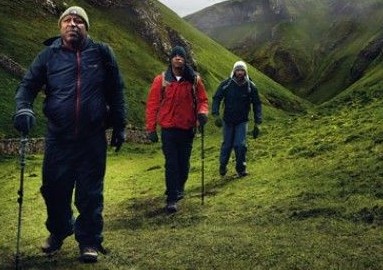 When I told my friend the premise of Black Men Walking, she was surprised by its setting. “You wouldn’t think….” she trailed off, “I guess it says something about our preconceptions.”

Indeed, the rural landscape that Thomas, Matthew, and Richard navigate is a space often perceived as not being ‘for black people’. The characters discuss this prejudice as they journey through the play, imagining the fear they will instill in locals, and the sensationalised headlines that could be extracted from their mundane routine: “three black men roam loose in the English countryside”.

The rural landscape that Thomas, Matthew, and Richard navigate is a space often perceived as not being ‘for black people’

Thus their walking becomes a revolutionary act, a way to carve their space in a territory associated with whiteness. It is also a way to retrace their history, as they step in line with the many black historical figures that have walked this land before (the play alludes to a number of these – from the Roman emperor Septimus Severus, to the black trumpet player of King Henry VIII’s court). Watching the play on the day it was revealed that Britain’s oldest ancestor had black skin, this message resonated even more strongly.

The play, written by Yorkshire-based rapper Testament, features a British-born GP (Matthew), an older man nearing the end of his career (Thomas), and a young software developer who immigrated to England from Ghana (Richard). Based on a real group of black men who meet monthly to walk through the Peaks in Yorkshire, all three characters feel like people one could encounter in real life, realistically sketched, and the actors fit into their roles seamlessly. Tyrone Huggins in particular does a brilliant job at depicting Thomas’ stern composure, and nostalgia.

Their walking becomes a revolutionary act

Despite its minimalistic plot, the play articulates a powerful exploration of race in modern day England. With humour and sensitivity, the characters detail experiences with racial micro-aggressions, from ‘the look’ they get in majority white spaces, to the need to work twice as hard as their white colleagues and the assumption that they are not natives even when their home has always been Britain (“How long do we need to be here before we’re considered British?”).

Besides racial discrimination, they each undergo their own personal difficulties. Matthew suffers from problems at home, Richard talks of his conflicting relationship with his father, and Thomas struggles to come to terms with old age. Their disparate lives and personalities can mean that even in their attempts to escape the humdrum of modern life, the sense of disconnect perpetuates: often the characters speak at, rather than to, each other. The moments where they converge and chant (“we walk, we walk” is the play’s rhythmic refrain) thus become moments in which a sense of togetherness is regained.

Despite crossing generational, cultural and class boundaries, the three men can sometimes feel like part of a male-centric bubble

Despite crossing generational, cultural and class boundaries, the three men can sometimes feel like part of a male-centric bubble, stuck in their ways and views. Thus, the appearance of a fourth character—Ayeesha, a young female MC—is refreshing. Brimming with wit and vitality, Ayeesha mocks the men for their muted, phallocentric ‘rebellion’. Dorcas Sebuyange is brilliant in the role, with highly expressive body language and a powerful delivery of speech.

A singer and rapper, Sebuyange has a beautiful voice. Her singing is merely one of the many musical elements of Black Men Walking: from a rhythmic script to scenes of chanting and percussion, the play is informed throughout by its writer’s career as an MC.

Sometimes the transitions from mundane walking scenes to more stylised moments of music and monologue can feel clumsy. Huggins and Trevor Laird, both of whom have starred in adaptations of Shakespeare, shift from a naturalistic mode of acting to a highly dramatic one. This contrast can be jarring, and ultimately abates the power of the play.

The characters’ constant reiteration that their walking is an act of resistance can also feel forced and repetitive. Their efforts to define their excursions in philosophical and political terms hinder the audience from having to consider these repercussions themselves, and thus engage more critically with the play.

Filled with humour and pathos, music and history, Black Men Walking is an ambitious production

The staging of Black Men Walking is minimalistic; a few odd plants embellish an otherwise naked curved platform on which the characters go up and down as if climbing hills. With limited space and a plot that derives its strength from movement, the play relies quite heavily on mime techniques. The actors perform this skillfully—their ‘walking’ consists of moving their legs up and down on the spot, which works surprisingly well.

Filled with humour and pathos, music and history, Black Men Walking is an ambitious production, one that attempts to condense five hundred years of black British history in a single excursion. Despite not always successfully tying together its many facets, Testament and director Dawn Walton ultimately produce a wonderful play, at once deeply thought-provoking and highly entertaining.