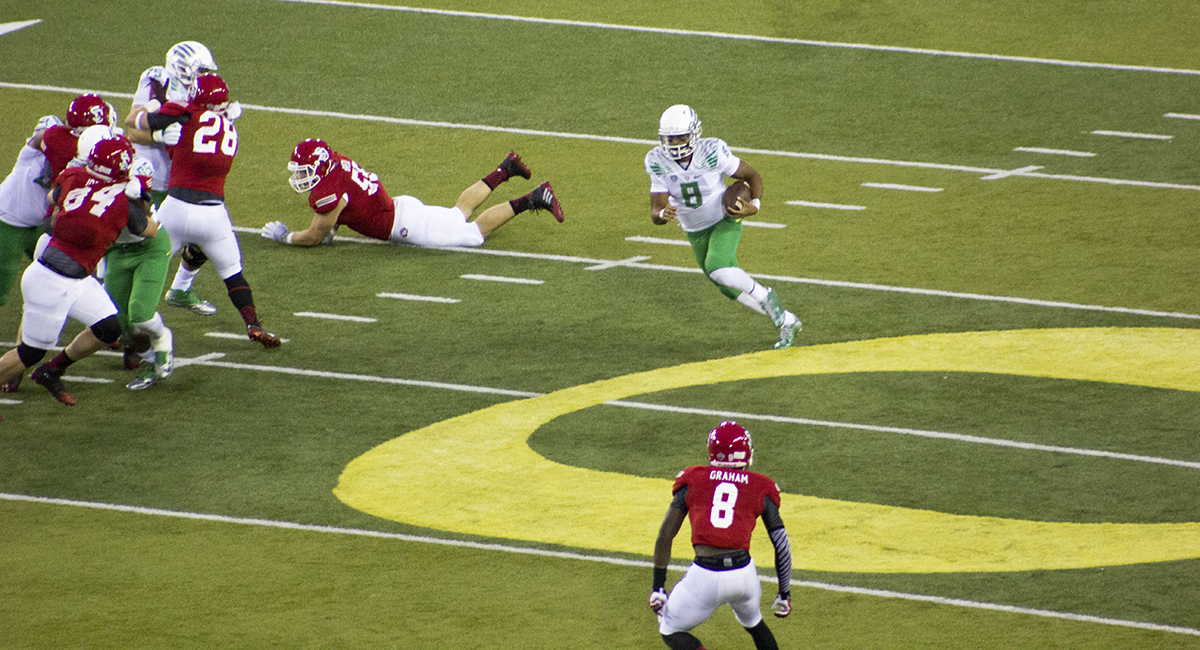 A truly memorable Wildcard Weekend has been and gone. The round of games started with supposed cannon fodder, the Tennessee Titans, trudging over to face Kansas City Chiefs at the notoriously formidable Arrowhead Stadium. The Chiefs did suffer a terrible lull in the mid-part of the season but have finished strongly with four wins on the bounce. Racing into a 21-3 half time lead they seemed to be on their way to yet another victory.

Alex Smith, coming off a personal best season, was looking to be the first quarterback since Joe Montana to win a playoff game for KC. Achieving this feat would go a long way in assuring the fans that he is the right man for the job, not the explosive rookie Patrick Mahomes who up until now has been waiting in the wings. However, the Chiefs’ postseason woes came back to haunt them as Marcus Mariota spearheaded a brilliant Titans comeback to win the game 22-21, potentially saving under fire coach Mike Mularkey’s job. This featured a truly remarkable play when Mariota threw a pass which was batted down by veteran corner Darrelle Revis…straight back the quarterback’s hands, which he scooped up gratefully for the touchdown.

The Chiefs’ postseason woes came back to haunt them as Marcus Mariota spearheaded a brilliant Titans comeback to win the game 22-21, potentially saving under fire coach Mike Mularkey’s job

This is yet another devastating postseason loss for Andy Reid’s team to have to endure. Questions are being asked of an offence which could not get a single first down in the third quarter, and a defence which gave up  19 unanswered points to the previously lacklustre Titans. Meanwhile for Tennessee they are rewarded for their faith in previous number two overall pick Mariota with a trip to Foxborough to face the Patriots, who do not seem as invulnerable as in years past.

Many predicted a regression to the mean for the Atlanta Falcons after their infamous implosion in last year’s super bowl. However, a week 17 win against the Panthers saw them into the playoffs despite an unconvincing season. On Saturday night they faced off against the LA Rams, who have been revitalised by nailed-on coach of the year Sean McVay. He has transformed Jeff Fisher’s horribly tepid team into an 11-5 force, with a homefield playoff game at the Colosseum.

It was a contest that lived up to the billing. 2016’s number one pick Jarred Goff, who had an atrocious rookie season, played pretty well for the Rams. Nevertheless, they were let down by what had been considered the league’s best special team’s unit, and an inability to get MVP contender Todd Gurley involved in the passing game. The young Falcons defence finally lived up to the promise, as Matt Ryan continued his tremendous recent playoff streak connecting with Julio Jones for the pivotal touchdown in a 26-13 victory. The game was in reality much closer than the score line suggested and the Falcons were very much indebted to their 42-year-old kicker Matt Bryant, who made 4 field goals. Next up for the Falcons is an away fixture in Philadelphia, where they will come up against the Carson Wentz-less Eagles, in a match-up where Atlanta are heavily favourited.

The Rams were let down by what had been considered the league’s best special team’s unit, and an inability to get MVP contender Todd Gurley involved in the passing game

In the early game on Sunday the Buffalo Bills ended the league’s longest ever drought when they faced off against the Jacksonville Jaguars, whose defence is arguably the best in the NFL. Both sides struggled greatly on offence with the best quarterback at the game, Tony Romo, actually in the booth. He looked on aghast at both teams inability to get the ball moving. Blake Bortles again demonstrated why so many attest that he is derailing this promising team, as he pitifully threw for less than a hundred yards. Despite this, his solitary touchdown to tight end Ben Koyack and surprisingly good rushing stats were enough to see off the pretty dismal Bills.  As Buffalo’s long wait for a post-season victory continues, ‘sacksonville’ head to Pittsburgh to face Big Ben, whom they intercepted five times in their last meeting.

Last but not least came the standout game on paper. Divisional rivals the Carolina Panthers faced the Saints in the New Orleans Superdome. Cam Newton looked sharp from the outset but was let down by his receiver Kaelin Clay, who dropped a dime of throw in the end zone. The usually reliable kicker Graham Gano then missed the subsequent field goal. Matters were made worse when the Saints’ quarterback Drew Brees unleashed a bomb to former Panther Tedd Ginn, who then ran clear for the 80-yard touchdown. Brees would throw for two more, whilst rookie sensation Alvin Kamara would sprint for another in a 31-26 win.

The Saints got a vintage Brees performance, reminiscent of the 2010 super bowl, as the Kamara-Ingram duo, coming off one the most effective joint seasons in history, combined for less than 100 rushing yards

The Saints got a vintage Brees performance, reminiscent of the 2010 super bowl, as the Kamara-Ingram duo, coming off one the most effective joint seasons in history, combined for less than 100 rushing yards. They now head to Minnesota to take on the Vikings in the stand out game of the Divisional Round. Meanwhile changes are afoot in Carolina with the team officially put up for sale. Both offensive coordinator Mike Shula and quarterbacks coach Ken Dorsey have also been let go. It just goes to show how cruel of a business the playoffs can be.