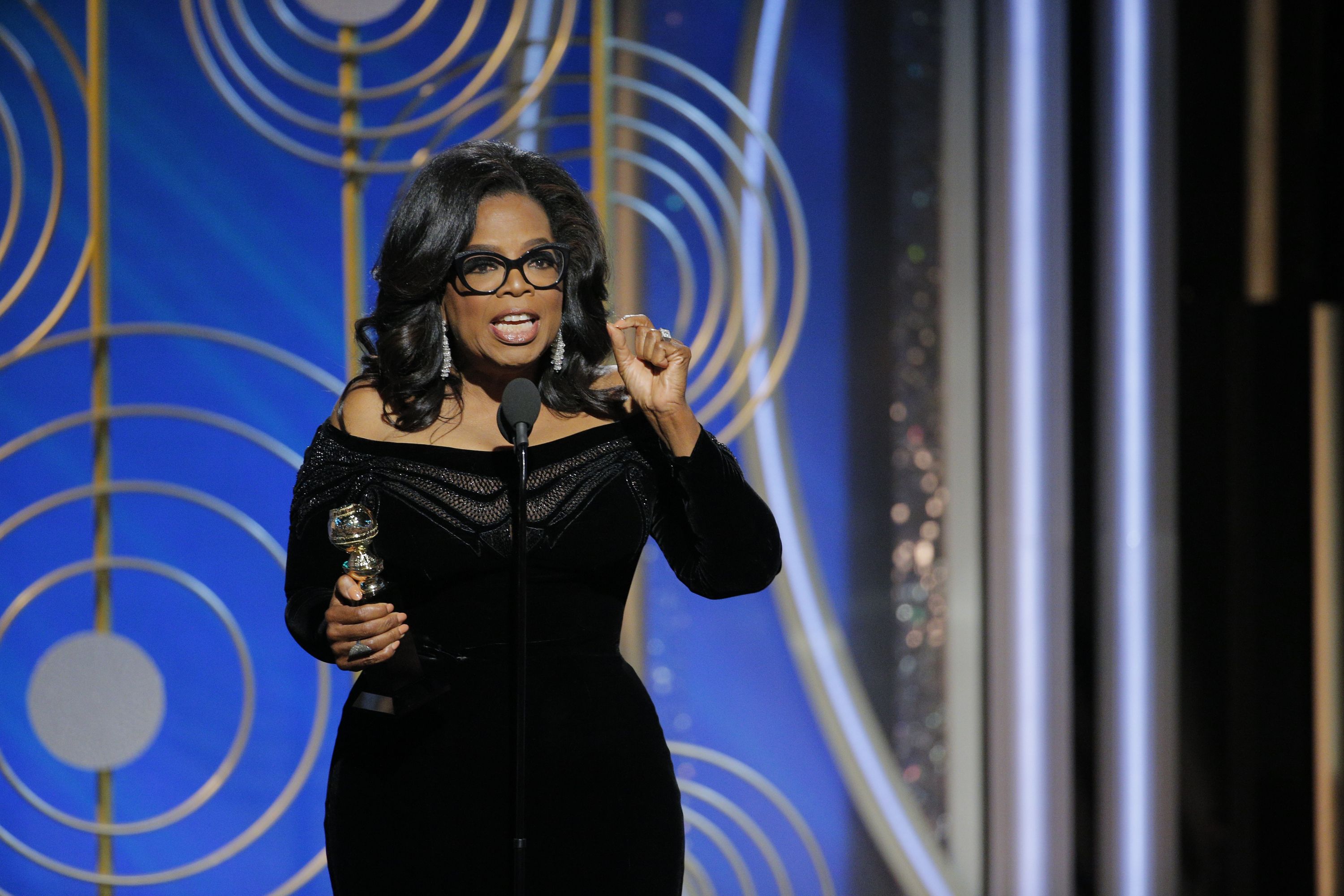 Activism at the Golden Globes 2018 – too little, too late?

Last year saw Hollywood wounded, with sexual harassment and abuse accusations against countless big names on an almost systemic scale. At last night’s Golden Globes awards – the first major awards show since the allegations – stars wore black and promoted their Time’s Up movement in order to show solidarity with the victims of sexual abuse, and to convey a message that it was no longer to be tolerated. Accepting the Cecil B. DeMille lifetime achievement award, Oprah Winfrey said that it was ‘a new day’.

But are these steps sufficient, or are they just gestures that fail to tackle the real problems? Four writers have their say.

Hollywood seems to be leading the way for industries finally standing up against sexual harassment against women. Except, touting Hollywood as admirable and revolutionary is falling exceptionally short of the mark. It’s too little and too late.

Women wearing all-black to an awards show for an industry that has routinely exploited their own sex is bordering on hypocrisy. These are women who have heard and known about the goings-on behind closed doors, and continued to consensually work with sexual predators for their own gain. Those accused who were previously given the benefit of the doubt are now being vilified. Suddenly, the situation has got too big and too public to simply sweep under the rug, and they’re having to own up to their own misjudgements with what is really a paltry show of comradery to victims of sexual violence. Not harassment, the PR-friendly turn of phrase, but violence. This isn’t catcalling or inappropriate nicknames; what has happened in Hollywood is routine and calculated exploitation of women.

Hollywood ‘standing up’ towards sexual violence isn’t achieving anything, within the industry or beyond it. Accusers are just that – accused. There is no evidence, there is no due process, and it’s become a trial-by-press for those who happen to come under the firing line for accusation of sexual assault or rape. The impetus for naming and shaming means that sexual predators aren’t being brought to justice, but rather their careers and names are in ruins – potentially without warrant. A lost career does not a repentant man make, especially when they’re still free and rich.

Women wearing black to bring attention to sexual violence isn’t going to change the attitudes necessary to stop sexual violence. Publicity stunts and unfounded accusations won’t either. What will is due judicial process and men faced with the reality that those who commit a crime will pay with more than just their reputation.

Yesterday evening my Twitter timeline was blessed with the face of Justin Timberlake, posing with his beautiful wife and captioned with the trending hashtag #timesup. At first, this is exciting – a successful man and woman both in the film industry, standing together and promoting gender equality; saying that Hollywood will no longer tolerate the countless cases sexual harassment and assaults in the industry which have flooded the media recently. Indeed, Justin Timberlake and his wife were not the only two to use the hashtag #timesup and adorn themselves in black garments at the Golden Globes to support this cause; a surge of celebrities took to social media to indicate that they got the memo too, and showed the world that even on a night of glitz and glamour, the deeper issues that are affecting people every day are not to be forgotten.

Hollywood, of course, is simply a microcosm of sexual harassments and assaults which happen in the workplace of the ordinary person, however the world does look to Hollywood as a cultural and influential platform; to say that the time where this has been accepted is ‘up’ is a reflection of change which needs to be inspired in the rest of the world, and it can thus the use of the hashtag and the dress code at the Golden Globes can only be described as a much needed symbol of solidarity.

It needs to be #timesup on having a fake belief culture

However, this symbol has no real meaning if beneath it lays hypocrisy. Take Justin Timberlake’s selfie, for example; the image claims to empower the woman by his side and to show solidarity with the movement, and yet he is set to appear in the latest Woody Allen movie – a man linked with these cases of sexual violence and harassment and a prime example of somebody not suffering the consequences for their actions. Indeed, by starring in the movie, Justin is inducing him to profit from his corruption even more. Furthermore, Kirk Douglas received a standing ovation from the crowd after picking up the award for best screenplay at the age of 101 – all in spite of the fact that he has recently been on the receiving end of rape allegations. Although these may yet be unfounded, Hollywood’s #metoo and #timesup promote a culture of belief which supports the survivors encouraged to come out. To give a standing ovation contradicts this notion completely.

Black is the new red, as this year’s Golden Globes’ carpet has shown us. For weeks, actors and celebrities have been posting and reposting the “Time’s Up” slogan to bring attention to sexual harassment in the workplace, and on Sunday men and women of Hollywood turned up in a united but glamorous black uniform.

But as the saying goes, actions speak louder than words (or a black masquerade). And before the awards even began it was raining hypocrisy. There were no female director nominations, despite the incredible and worthy contributions, not a word was heard from actors regarding relevant issues involving those both not present, such as Kevin Spacey, and present (James Franco was ironically parading his ‘Time’s Up’ pin despite harassment allegations). Many words and praises were said about honouree Kirk Douglas, despite the rape allegations against him, and no-one mentioned Rose McGowan, who essentially started the whole movement.

Before the awards even began it was raining hypocrisy

Despite the good intentions, the Globes definitely didn’t live up to the promised revolution and proved just how slowly the wheels that have supposedly been kicked into motion last year are actually turning. However, time isn’t up yet for Hollywood to redeem itself with two months left till the Oscars. How will they colour the carpet this time?

The 75th Annual Golden Globes on Sunday night was the first major awards ceremony to be held since the sex scandal that has engulfed Hollywood. As Tinseltown descended on the Beverly Hilton Hotel, the shadow of Harvey Weinstein and many other disgraced figures loomed large over the event, resulting in a far more sombre and reflective tone.

In a striking and powerful display of solidarity and unity, actresses ditched the colour and opted for all black ensembles in support of the Time’s Up initiative and the #MeToo movement. This politically charged atmosphere permeated the ceremony. Some of the big winners in cinema were female-led or inclusive, including the coming-of-age film Lady Bird, which nabbed Best Motion Picture (musical or comedy) and Best Actress for Saoirse Ronan, while Three Billboards Outside Ebbing, Missouri won best drama. In television, The Handmaid’s Tale received Best Drama, while Big Little Lies was granted Best Limited Series.

The shadow of Harvey Weinstein and many other disgraced figures loomed large over the event, resulting in a far more sombre and reflective tone

The awards bestowed certainly reflected the atmosphere, with the ceremony choosing to celebrate and highlight the importance of strong, nuanced female characters. But it was Oprah Winfrey, the first African American woman to receive the Cecil B. DeMille Award for her outstanding contributions in entertainment, with her unique brand of warmth and authenticity, who truly captured the essence of the evening.

Winfrey’s rousing speech reached beyond the Hollywood scandal and hailed the bravery of all women in all industries who dared to say #MeToo. She told us: “What I know for sure is that speaking your truth is the most powerful tool we all have. I’m especially proud and inspired by all the woman who felt strong enough and empowered enough to speak up and share their personal stories.”

Despite these progressive aspects, the ceremony hit some jarring notes. The nominees for best director did not include any women, notable snubs including Greta Gerwig for Lady Bird and De Rees for Mudbound. Natalie Portman brilliantly addressed the disparity when introducing the nominees, simply stating “Here are the all-male nominees”. However, while women dominated the event with pertinent discussion and debate, most of their male peers remained quiet and their silence was deafening. With the exception of Seth Meyer’s opening monologue, which began with the line “Good evening ladies and remaining gentlemen,” male actors who picked up awards appeared to evade the subject altogether.

While women dominated the event with pertinent discussion and debate, most of their male peers remained quiet and their silence was deafening

Eradicating misogyny clearly requires more than a wardrobe change and the conversation surrounding sexual misconduct in Hollywood is far from over. Crucially, it is instrumental that men are included in that conversation and that they speak up, stand beside us, and use their voice to elicit instrumental change.

All eyes were on the awards ceremony and through the sea of black gowns, impassioned speeches about female empowerment and the inclusion of feminist activists on the red carpet, the women certainly made a strong and poignant statement. The Golden Globes acknowledged the beginning of changes that must be implemented, as Oprah Winfrey so eloquently expressed: “A new day is on the horizon, and when that new day finally dawns, it will be because of a lot of magnificent women and some pretty phenomenal men are fighting hard to make sure they become the leaders who take us to the time when nobody has to say ‘me too’ again.”