If the Marks and Spencer’s advert wasn’t enough to open your heart up to the Peruvian bear in the red hat and duffel coat, then let Paddington 2 give it a go. This review contains no plot-related spoilers and if you haven’t seen this film – you must!

When Paddington Bear graced our screens in 2014, my Mum was delighted. Since she’d grown up reading about his marmalade sandwiches and comedic adventures, what she felt was not hugely dissimilar to the excited, nostalgic familiarity university students are feeling right now at the return of Finding Nemo’s Dory and a sequel to The Incredibles due to be released next year.

If you haven’t seen this film – you must!

Paddington had already won the hearts of our parents, but in 2014 it had to compete with the likes of Olaf and Maui to gain the respect of a new generation. Ironically, it’s Paddington’s traditionalist values that have propelled him to rise in recognition above the army of witty characters such as Olaf we are more familiar with. Though Paddington definitely falls into these categories, it is his charming personality, centred on wholesome, humble compassion and good-intentions – however naïve they may be – that makes him so amiable. He’s funny, friendly and cute – what’s not to like? 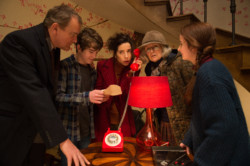 Paddington 2 has a phenomenal set with a soaring budget. Hugh Grant (as if being the Prime Minister in Love Actually doesn’t already make him the most appreciated actor in December) reveals his flexibility by smashing his role as the selfish villain. Both he and Brendan Gleeson, perhaps best known for his lumbering portrayal of Mad-Eye-Moody in Harry Potter, are also capable of providing light-hearted comedy beneath their threatening stances against Paddington. However, it’s not just them, the entire cast who deserve to have their performances complimented. Even the smaller parts such as the guards and neighbourhood faces complement the film’s charm by bringing their all. Every scene offers a rainbow of colours, and the transitions between them are ingenious – whether it be the pages of a book coming to life or the Peruvian rainforest spiralling around our hero in a cold London room.

Ironically, it’s Paddington’s traditionalist values that have propelled him to rise in recognition

Although Paddington is evidently a children’s film, any fears of it proving boring or simple are obliterated by its expert casting, phenomenal cinematography, animation, and a witty script. All of the story’s components are beautifully woven into the story’s climax, and by no means do his perils lack sincerity or tension as the lady in front of me started crying before the ending. Paddington’s kindness and selflessness certainly do not provide him with an easy life, exemplifying an important lesson to children and adults: good deeds are not always the easy option or are rewarded immediately.

I was not the only one who adored this film – it was received with five stars from the likes of The Guardian and The Telegraph. With comedy and life lessons that are accessible to children all the way through to their great-grandparents, the film provides welcome entertainment from start to finish. And our love for Paddington Bear? It’s back, and it’s sweeter than marmalade!