University of Warwick student Jack Hadfield’s leading involvement in an extremist right Facebook group has been revealed in an investigation by anti-racist advocacy group Hope Not Hate.

The group was a forum for members to express support for racist and nazi ideologies, antisemitic conspiracy theories, homophobia, misogyny and jokes about the Holocaust.

By joining the secret Facebook group Young Right Society (YRS), which contained some 200 members and was administrated by Hadfield, Hope Not Hate collected over 1,148 screenshots of posts. Although some members expressed more moderate right opinions, many in managing roles were openly propagating extreme hate-inciting views. 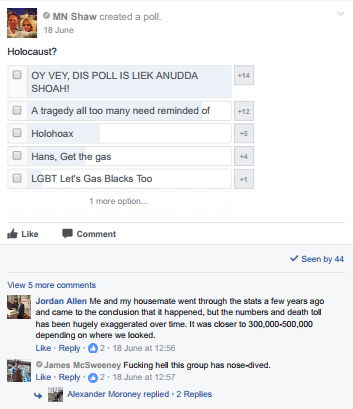 As administrator, Hadfield emphasised that “group security is paramount to allow discussion of all ideas”, repeatedly running “purges” of members and requiring them to post “their edgiest opinion.” He implemented rules prohibiting taking screenshots and discussing the group elsewhere, removing members who failed to do so.

Although Hadfield’s posts were more moderate than some, he frequently instigated racist and misogynistic threads and tolerated their development as group moderator.

The group discussed recruitment strategies, along with the pros and cons of openly supporting neo-fascist groups and using nazi images. When group moderator Michael Brooks suggested changing the group’s banner to a stylised SS iconography, Hadfield reportedly replied: “Swastikas are unbritish m8. You’ve got the right aesthetic but it’s too autistic.”

Hadfield reportedly replied: “Swastikas are unbritish m8. You’ve the right aesthetic but its too autistic.”

Hadfield described YRS as “a Fascist-Juggalo group with traditionalism interest,” adding “we tolerate other ideologies but make no mistake if you don’t like it, you know where the door is.”

Last academic year Hadfield, a Men’s Rights activist, Trump supporter and former UKIP member, ran in the SU elections, prompting a campaign to stop him which called his views “so poisonous that their exposure is overwhelmingly in the student interest.”

He has written over 200 articles for Breitbart, a far-right US platform which aligned with the American alt-right under the management of Donald Trump’s former chief strategist, Steve Bannon, and has been widely condemned for promoting conspiracy theories, misogyny and xenophobia. 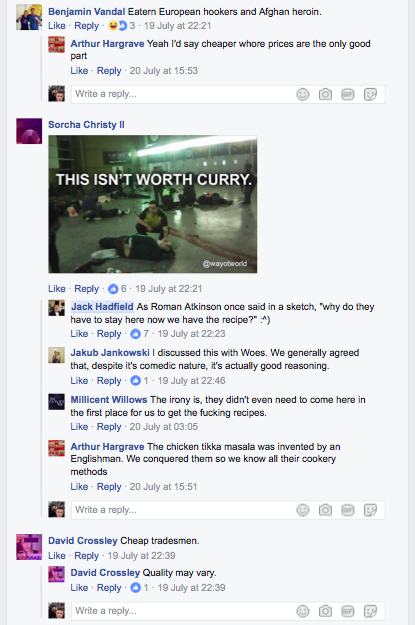 In his first article, shortly after starting Warwick in October 2015, he condemns the University’s sexual consent workshops, adding his name to “what I am sure is a growing list of understandably aggrieved young men,” and says: “How many rapists are going to stop raping people because some pretentious student told them that “Yes means Yes”? Any at all?”

“And why would any normal, right-thinking man attend a class that demonises them and normal, healthy male sexuality by pretending that all men are latent rapists who would take advantage of women if they thought they could get away with it?”

Speaking to The Boar, Hadfield said: “I consider myself on the moderate right, but I strongly believe that all ideas, including those of the so-called “alt-right” must be debated, especially if you disagree with them and wish to refute them, as I do.” 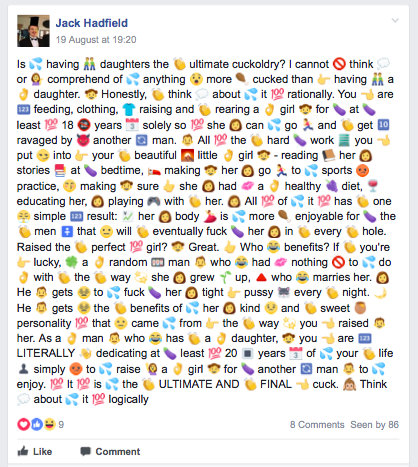 Post by Hadfield: “Is having daughters the ultimate cuckoldry? … You are feeding, clothing, raising and rearing a girl for at least 18 years solely so she can go and get ravaged by another man.” Cuck is alt-right slang for men perceived to be emasculated or selling out.

“Attempts to ostracize them from polite society will do nothing except feed the sense of victimhood that gave rise to them in the first place. That means that yes, you do debate with them, and you do associate with them. I’d do the same with communists, by the way.”

“Unfortunately, the media’s belief in guilt by association has grown to such an alarming degree that such debates must now be carried out in secret.”

“This smear campaign run by Hope not Hate is just another example of the left attempting to shut down free discussion, a worrying insight into the future of so-called “liberals” in this country.”

Hadfield commentates on women’s sexual attraction and rape of women.

Like Hadfield, Brooks also showed interest in moderating the group aesthetic, commenting: “You fucking right wing faggots need to knock off the nazi/ethnonat stuff. It drives off Civics who I keep adding and are open to nationalistm (sic).” He added, “I am 14 and 88, but even I know optics and recruiting normies.”

“14 and 88” is a reference expressing support for Adolf Hitler and the “Fourteen Words” manifesto. Brooks has been photographed with both Jacob Rees-Mogg and Nigel Farage, as well as Theresa May at the Conservative Party Conference last month.

He has a number of links to other far-right content makers, such as Lauren Southern and Brittany Pettibone, and shared a number of racist posts, including a graph showing a supposed increase in the population of sub-Saharan Africa with the caption “Planet of the Apes isn’t science fiction, it’s a warning,” and supporting Richard Spencer’s torchlight marches in Charlottesville last May. 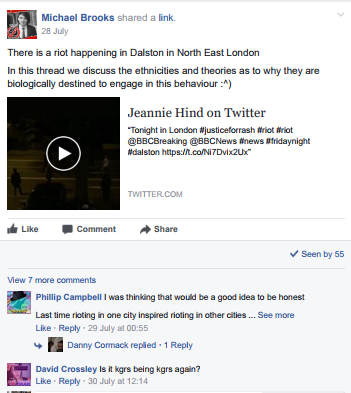 YLR reportedly also counted among its members a number of Conservative and UKIP activists, including the latter’s Youth Independence chairman, Jamie Ross McKenzie.

McKenzie, who used the group to promote UKIP youth wing and stoke support for leadership hopeful John Rees-Evans, came under fire over the summer for failing to manage the racist, sexist and homophobic trolling prevalent in youth wing’s Facebook groups. 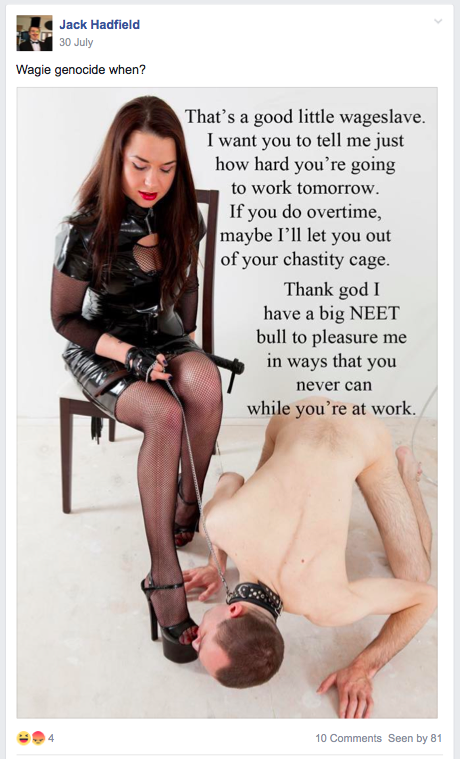 As well as advice on how to post racist and homophobic slurs without being censored by Facebook, members described late Labour MP Jo Cox as “a virtue-signalling, more-progressive-than-thou cunt” with Lorcan Maneely (who has been photographed with Hadfield) commenting: “I don’t care if traitors die.” Cox was brutally murdered by Thomas Mair in June last year, a constituent with ties to neo-nazi group National Alliance.

It also posted jokes about the Holocaust, with antisemitic polls suggesting that the genocide which claimed up to 17 million lives in living memory was a hoax, “a tragedy all too many need reminding of” and proposing “LGBT Let’s Gas Blacks Too.” 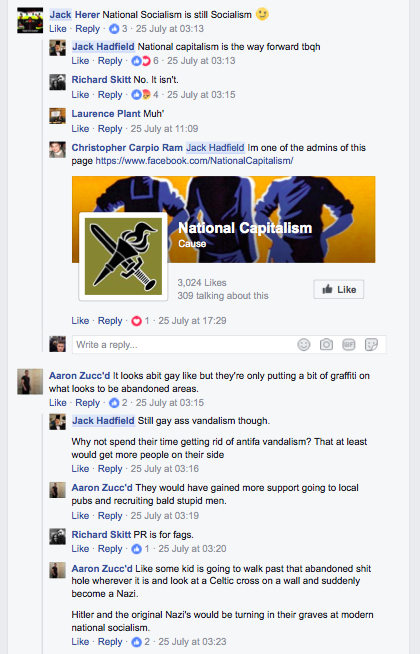 Comments on a post by Hadfield on nazi graffiti group NS131.

In other polls, 72% responded that a “racially diverse society is undesirable” and 53% that giving women the right to vote was “a mistake.” 72% agreed that “disparity between average IQs of different races” was caused by genetic factors.

47%, more than any other group, said that they considered themselves ethnic nationalists, while 90% responded that ethno-nationalism should be “part and parcel” of YRS.

To the question “Would you unironically support the immediate liquidation of all communists, communists organisations and enablers of communist subversives,” posed by Brooks, 78% responded positively, with a majority saying “I’d join the Freikorps myself.” 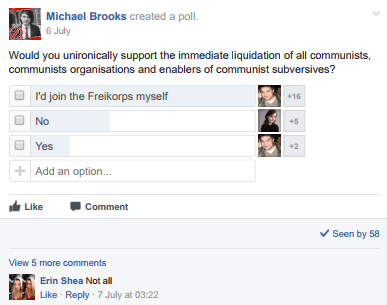 The group has had in-person meetings in London, Manchester and Belfast. In October, a group of members attended the far-right Traditional Britain Group’s conference, where Martin Sellner announced the launch of a UK branch of the white-supremacist Identitarian movement.

Last June 13, Brooks shared an invitation to YRS’ new whatsapp group. On August 23, Hadfield posted a call for Midlands residents to create one or more new groups for members living in the region.

YRS is one of several “spinoffs” from the Young Liberal Society (YLS) group on Facebook. Since Hope Not Hate published its screenshots online, Brooks’ profile was deleted from YLS. 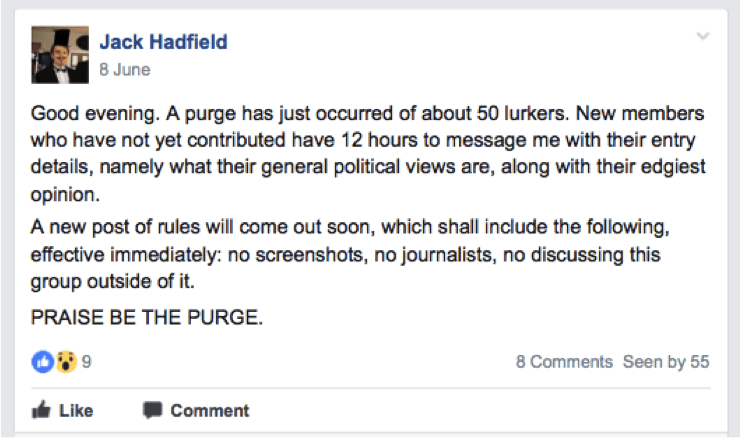 One of a number of “purges” run by Hadfield.

In a response to the article on Hope Not Hate, Brooks posted on Facebook: “Back in May I was put into a group that was designed for people on the political right (right of right of centre) to discuss things that would have been socially frowned upon in absolute comfort and ease.”

“I will not be intimidated by a far-left organisation that uses the most dirty and underhanded tactics to attack those with dissenting opinions.”

Politics Society president Ben Newsham, of which Hadfield is an active member, said the society was: “committed in the strongest possible way to political neutrality and the belief that open debate and discussion strengthens our political culture.”

A meme posted in YRS.

“This however, is limited to acceptable political discourse and the Politics Society unequivocally condemns any individual or political ideology that incites hatred or encourages violence.”

Responding to Hadfield’s allegation, shared on YRS, that society members would chant “I have never seen a fascist down a pint” at socials, he stressed that the alleged chant was neither originally created nor initiated by their social secretaries.

Hadfield also presents a fortnightly broadcast, Freeze Peach on Raw1251AM. Station managers Jack Abbey and Henry Riley commented: “He has not, to the best of our knowledge, broken RaW’s own presenter guide whilst on air.”

“We are currently seeking to ensure we deal with this situation in alignment with our constitution and principles as a society.” 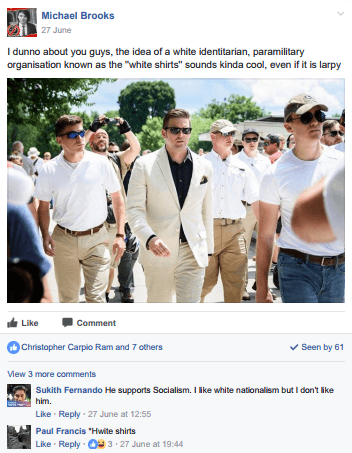 The Warwick Conservative Association, of which Hadfield is a member, stated that it “would like to take this opportunity to distance itself as far as possible from the views expressed in the group mentioned in the article, and the views expressed by any of our members in this group.”

“These attitudes have no place in our Association and we fundamentally disagree with them, and we are actively looking at what can be done to remove the member in question from our group.”

The University has been approached by a number of people over the weekend regarding the issue, and a formal complaint has been submitted.

All images are courtesy of Hope Not Hate.

Leave a Reply to . Cancel reply