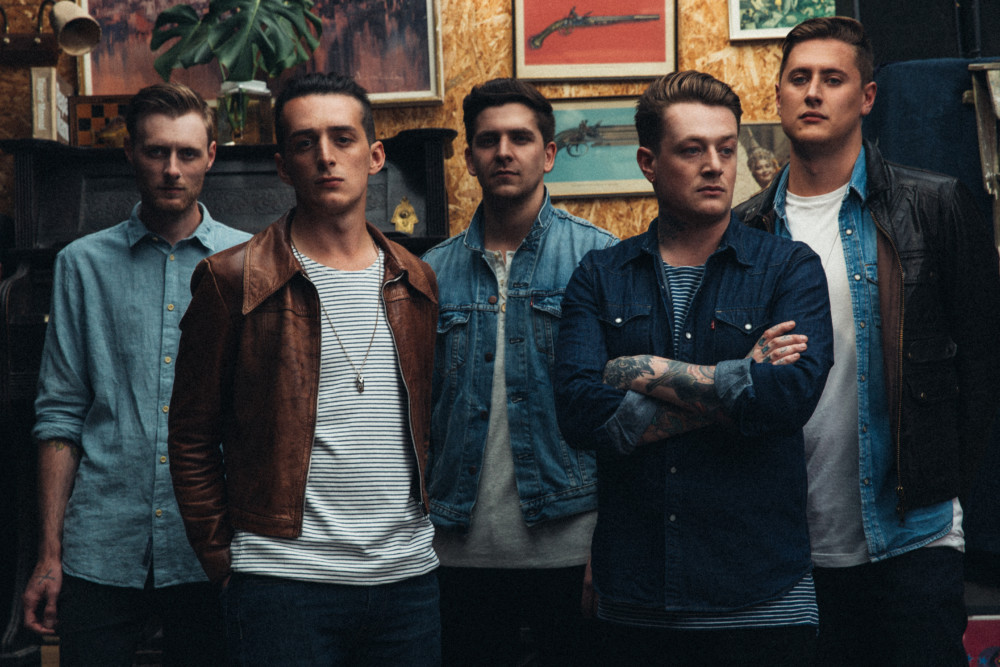 “I’ve already burst a blood vessel in my eye and lost a bit of my tooth”, reveals guitarist Matt Veck-Gilodi, answering how he has found the All These Countless Nights tour so far. “And we’re actually like five days in.” I’m sitting with him and brother James Veck-Gilodi, respectively lead guitarist and vocalist for Deaf Havana, before doors open for one of their first shows since the “reworked” re-release of their latest album.  All These Countless Nights, released in February, is their first album in four years, and the reworked version, released in October, consists of 27 tracks.

“I just get bored really easily and I love recording, and I just wanted to see what other directions [the tracks] could go”, says vocalist and Matt’s brother, James Veck-Gilodi. “[The reworked album] is just a creative process for James as well I think” adds Matt. “He can branch off in different ways that we might not necessarily be able to do on a standard Deaf Havana record, people would probably go a bit too far if we released something that sounds like Massive Attack. Whereas on a reworked version, because they’ll know the song already it’s a bit more doable.”

Considering how much Deaf Havana’s albums have changed in sound over the years already, this comes as something of a surprise. “Our fans are pretty loyal, it seems”, says James. “Instead of being annoyed at how we change or how different our music is, they tend to support it as an artistic vision which is pretty nice.”

On this front, drummer Tom Ogden has gone on record before as saying the album shows Deaf Havana in a completely new light, and the others don’t disagree. “[This album] has got the heaviest songs we’ve written and the lightest songs we’ve written, and lyrically maybe it’s not my best”, admits James. “I’m really proud of [the lyrics on previous album Old Souls] and I don’t think I can ever reach that again.”

We were going through a lot of stuff. We basically broke up and we did some tours which were sub-par to say the least

Matt adds: “it’s the first [album] where we’ve done it as a band proper. We all played it live and recorded it like that, so a big part of the energy when you listen to the record, whether it’s a slow song or a fast song, it stems from the fact that we are five people in a room playing it.”

It’s difficult not to find distinct themes recurring in ATCN. Fitting Deaf Havana’s usual lyrical themes, motifs like wasted time, balances of nostalgia and optimism, and alcohol come through clearly. James explains “We were going through a lot of stuff. We basically broke up and we did some tours which were sub-par to say the least. I didn’t specifically say ‘right I’m going to write a song about this’. I’d have millions of notes on my phone that I’d written when I was travelling around.”

I was so close to quitting, I think I even sent everyone a message and I was like ‘I’m done with this shit’

“I also think that’s why it’s so much more diverse as a record”, points out Matt. “[The songs] are from when James was in different mind-sets because the time of his life was different.” “I didn’t know what to do with myself”, James agrees. “I always write about things that are actually real, it’s just easier to write about (…) wouldn’t you rather listen to something that’s real?”

As James mentions, it’s no secret that in 2014, Deaf Havana almost disbanded, partly due to financial issues. With ATCN reaching number five on the UK Album Charts and the follow up tour spreading across Europe, their fortunes have seemingly turned. So, how does it feel to come back from that? “Incredible”, answers James immediately. “We hadn’t done a headline show proper because all the other shows we’d done before that were just to pay off this debt we’d got in… To have that response from everyone was amazing and it’s just carried on.” “It’s definitely the best time for our band, like we still have a laugh and we’re still quite casual just from how we are and where we came from”, he adds. “I was so close to quitting, I think I even sent everyone a message and I was like ‘I’m done with this shit.”

It is more difficult at a stadium level (…) You’re so much further away from the crowd, so it’s difficult to have a personal connection, which is what we pretty much rely on

And what did they learn from the experience? “If I’ve learnt anything it is to remember why you started doing what you’re doing”, says Matt. “The moment that little spark escapes that you had when you were in a garage when you were fourteen playing songs, the moment that goes, you’ve got to question why you’re doing it.” They both mention that this raw passion is essential for the band, adding that it’s also something they look out for in bigger bands. “It is more difficult at a stadium level”, says Matt. “You’re so much further away from the crowd, so it’s difficult to have a personal connection, which is what we pretty much rely on.”

Having started aged 14, the band’s sound has certainly evolved over time. James says that they “definitely [have] more influences and it’s obviously less heavy. The music we play now is music I would listen to, whereas before I just liked jumping around onstage and I thought it was fun to play in a metal band.”

Proper music- it’s stuff that is artistically gratifying for the people who make it, therefore it will be remembered. I know that’s something that we actually take seriously

Speaking about being more experimental with songs in future, James says that “the only fear I have is if we put out something that we love but that is kind of different from what we normally do, I’m afraid that people might-”. “Oh we’ve already done that, it’s called Old Souls,” interrupts Matt. James laughs. “I loved it, but no one else did! But you can’t play music that other people want you to play all the time because you’ll just get sick of it”, he continues. Matt adds, “There are a lot of bands- not naming any names- who are just on fads, and that’s fine, sure, have a laugh for a couple of years. But proper music- it’s stuff that is artistically gratifying for the people who make it, therefore it will be remembered. I know that’s something that we actually take seriously”.

So what’s next for them? “Sleeping”, answers Matt. “Could probably do with a sleep after this tour…” “Writing and demoing”, replies James. “We want to get our next album out fairly quickly because there was such a long break between the previous two, so I need to just write as much as I can.”

Speaking about potential ideas for their next album, they said they’ve got a few ideas which are a bit different to what they’ve done before. “A bit lighter. Less emo!” explains James. “The last record opened us up to knowing that we can just try anything, just give it a go”, mentions Matt. “And I wouldn’t be surprised if it gets a bit more ‘bonjour’, like experimental. But I think that’s important, that’s what you do. You’ve got to grow as a band together.”