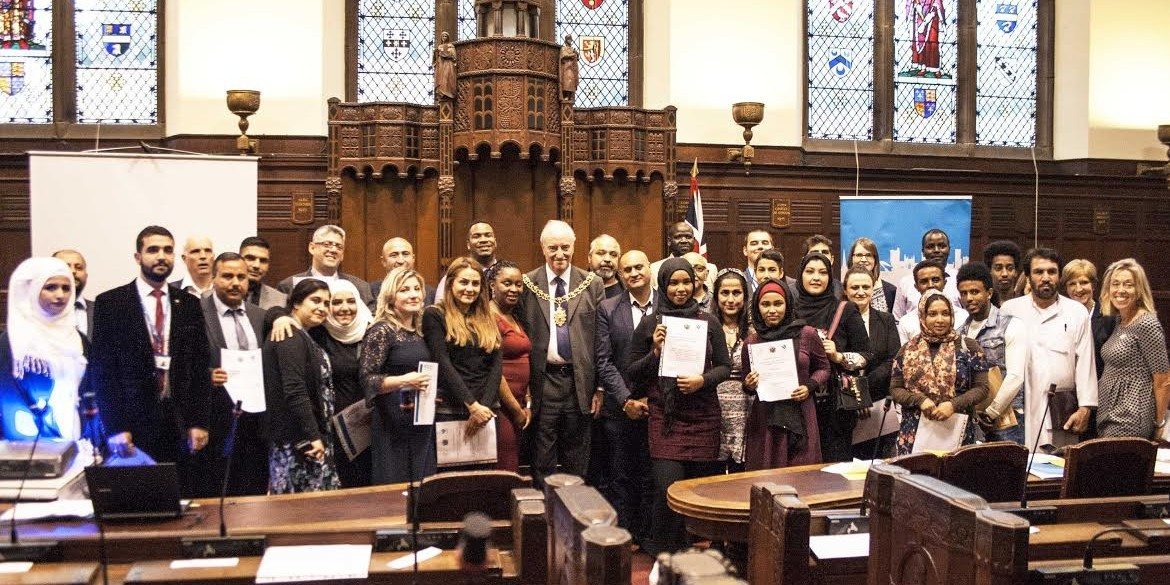 Coventry refugees awarded for contribution to the city

Thirty-three Coventry refugees and asylum seekers were presented with certificates honouring their efforts in rebuilding their lives and integrating into the community, as well as recognising the contributions they made to the city.

The Awards were co-hosted by the city’s lord mayor, councillor Tony Skipper and the Coventry Refugee Migrant Centre (CRMC) at The Council House on Tuesday 2 September. Certificates were presented by a range of organisations across Coventry, including the City Council, Accelerate and Coventry City of Culture Trust.

Jihan Belal, who arrived from Syria two years ago, was honoured for her efforts volunteering at Coventry City Council and Citizens Advice Bureau. Jihan, who plays for Coventry Sharks, the city’s National Championship-winning women’s handball team and works full-time at Interserve, was one of seven award-winners to have worked with Warwick University’s volunteer group, Student Action for Refugees. 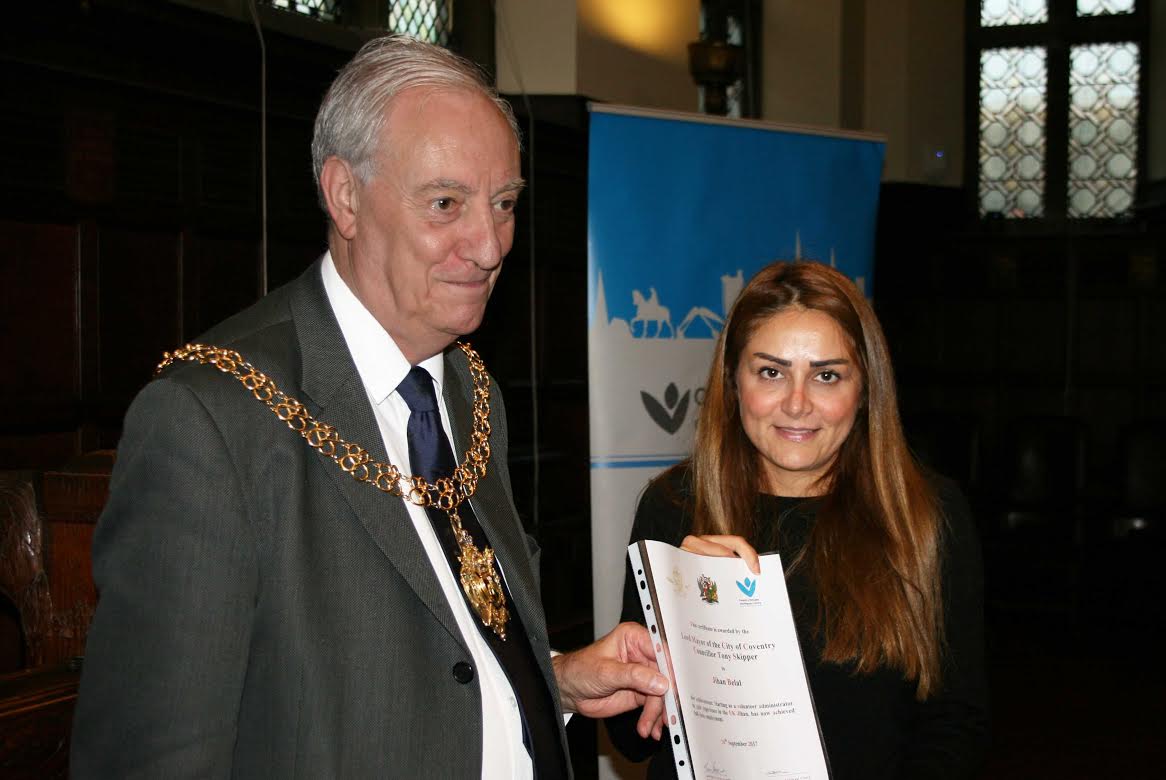 Jihan commented: “Coventry appreciates what you do, even if it is extremely small.”

“I was very upset when I arrived, but the support and welcome I’ve received has been brilliant. I’m proud to call Coventry my home.”

Coventry City of Culture Trust representative Nicole Malatesta commented: “Coventry’s welcome to the newly arrived is something which we can all be proud of.”

“Its diversity, culture and ethos of offering peace and sanctuary to those that require it, is a key reason why Coventry is the perfect candidate for the UK City of Culture in 2021.”

I was very upset when I arrived, but the support and welcome I’ve received has been brilliant. I’m proud to call Coventry my home.
Jihan Belal

The lord mayor added: “Tonight we recognise that people from all around the world have come to this city and are working hard to rebuild their lives and become part of our community.”

“Your rewards are very well deserved. Coventry is a proud city and a very caring city, offering a welcome to those fleeing war and persecution. I’d like to thank Coventry Refugee and Migrant Centre for their brilliant work dedicated to supporting these vulnerable people.”

CRMC and its partners have supported 300 Syrian refugees since the project began in 2014, supported by three staff members and ten volunteers who donated over 10,000 man hours. 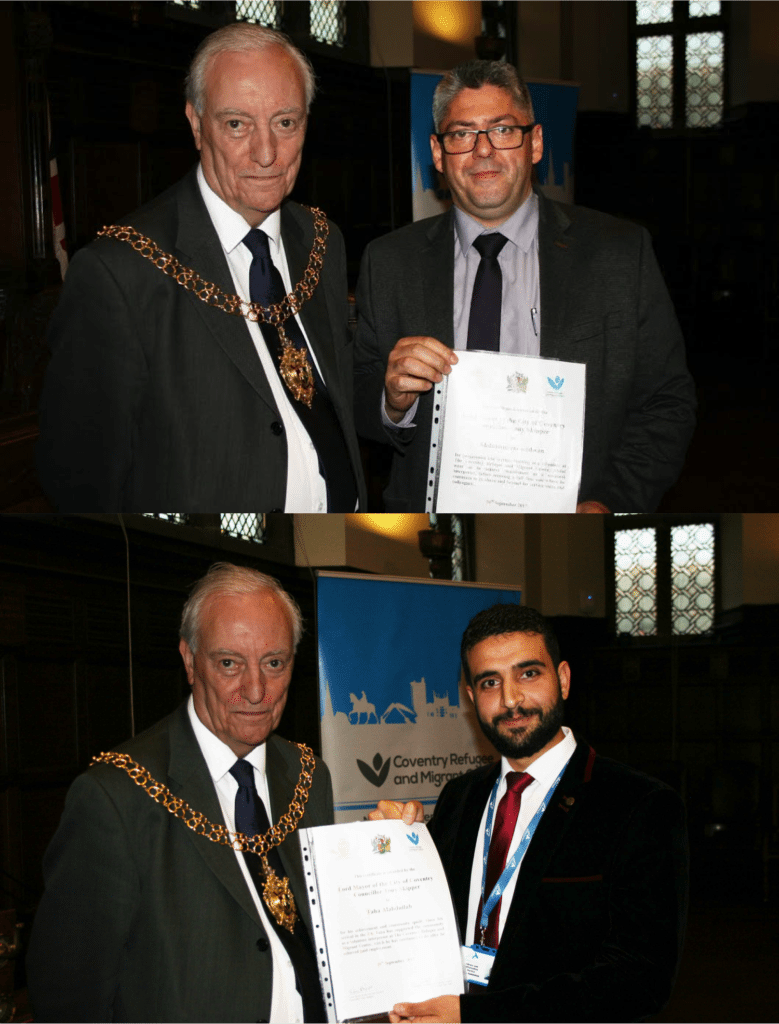 Abdul, from the Syrian Integration Project (top) and Taha, who works at Coventry Library (bottom), have also been involved with Warwick STAR. (Images: CRMC)

Meanwhile, Coventry welcomed more refugees than any other council in England under the “Resettlement Scheme” – under which a total of 71 local authorities accepted 1,602 Syrians in the six months after October 2014, when government created a “Syrian Vulnerable Persons Resettlement Scheme.”

When commenting on the pledge, Steve Symonds, Amnesty International UK’s Refugee Programme director stated that the target “has always been too low and too slow. After all, it’s only the equivalent of each constituency welcoming one family a year.”

It has always been too low and too slow. After all, it’s only the equivalent of each constituency welcoming one family a year.
Steve Symonds

The same year, Coventry’s UKIP MEP James Carver said: “I would bet my bottom dollar that the pressures on things like housing, hospitals, GP waiting times and school classroom sizes will be far greater in Coventry than in Mid Sussex.” 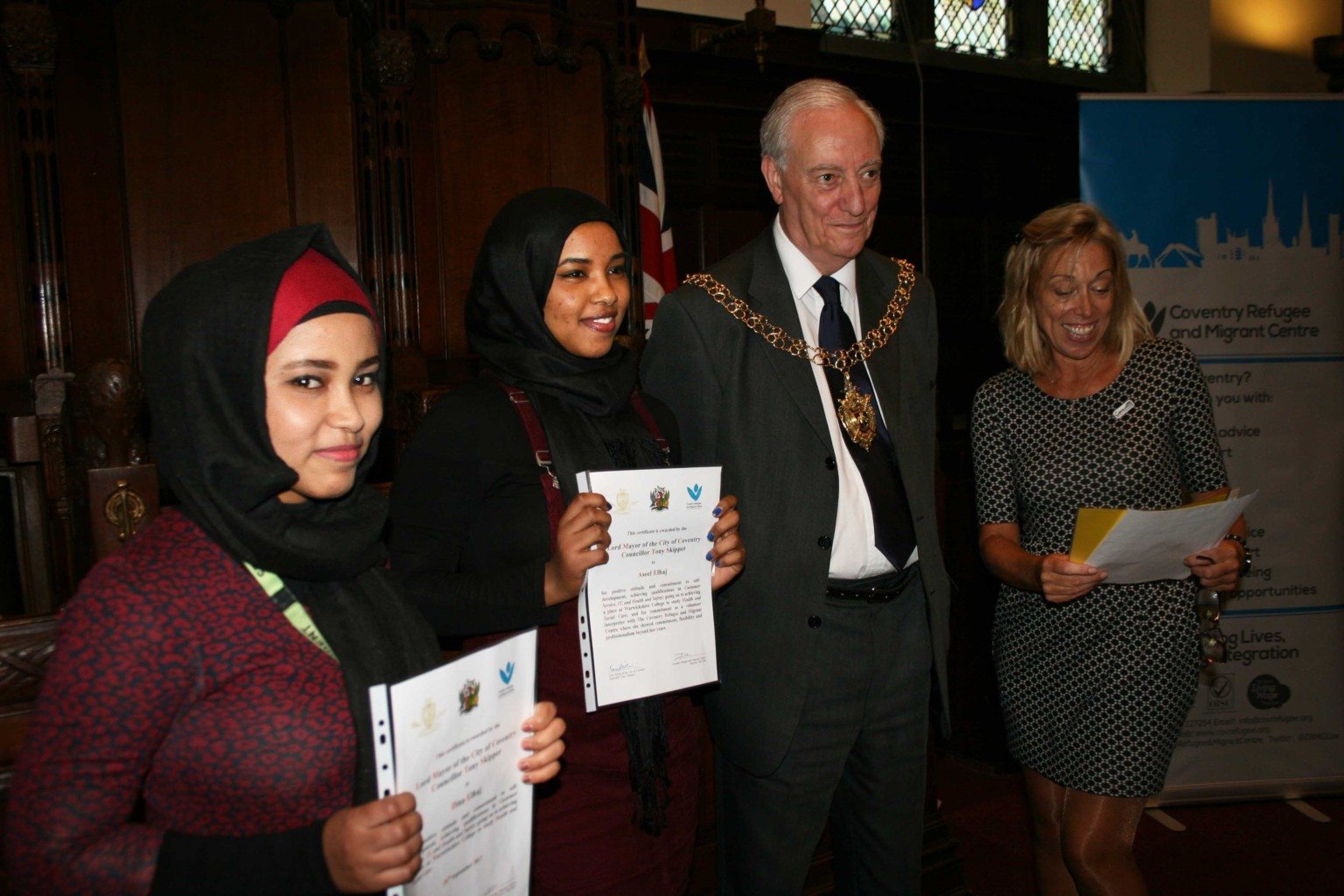 Sisters Dina and Aseel El Haj, who volunteer at Myton Hospice charity shop and the CRMC respectively,  arrived last year from Sudan. They have since secured qualifications in IT, customer service and health and safety and are studying to become nurses at Warwickshire College. (Image: CRMC)

However, he clarified for the Boar that: “Immigration and asylum are two very, very different things… Brexit will allow us all to get on with being British again, and that doesn’t mean being white Christian, that includes people with different skin colours and religions, which isn’t necessarily a bad thing.”

“I don’t cheer any less when Mo Farrah runs for GB than when Steve Cram used to… The point I was making was that some councils with less pressures on them weren’t living up to their obligations… it’s the duty of all local authorities.”

Coventry City Council deputy leader Abdul Khan also commented on the events, stating that Coventry is accepting refugees because “it’s the right thing to do.”